If you could magically shut down all electronic devices — not just cell phones, but TVs, laptops, and anything with a WiFi signal — just for the time it takes to get through dinner, would you?

Dolmio, an Australian-based pasta sauce company, claims they've developed an unlikely gadget to help parents take back the dinner table: a pepper mill. A single twist of the Dolmio Pepper Hacker powers down television sets, shuts off WiFi, and closes mobile apps for 30 minutes — enough time to strike up a conversation without a single technology-based interruption.

"We believe that meals shared with family and friends are often distracted by the very technology that is supposed to bring us closer together, so we've created the Dolmio Pepper Hacker to help connect us with the people in front of us," the company released in a statement last month.

So where can we buy it?! Creator Brendan Forster said that although they launched a campaign showing the covert device at work, it's still in the early development stages: "At this time, it's a limited number of prototype devices that we've built just to basically experiment to see what happens when you remove tech from the family room."

At this point, it seems too good to be true, but if the pepper mill does go into production, would you put it to use at your dinner table? 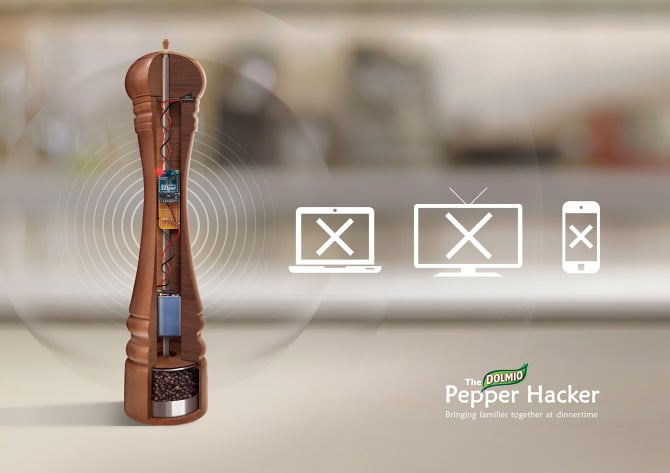 Dr. Seuss
6 Dr. Seuss Books Will No Longer Be Published Due to "Hurtful and Wrong" Racist Depictions
by Alessia Santoro 13 hours ago

Little Kids
This TikTok Creator Has 74 Videos Quizzing Preschoolers, and Every Single One Is Gold
by Kelsey Garcia 1 day ago

Animal Videos
This Woman Captures All the Activities Her Cats Do With Their Dad, and Talk About FOMO
by Murphy Moroney 1 day ago