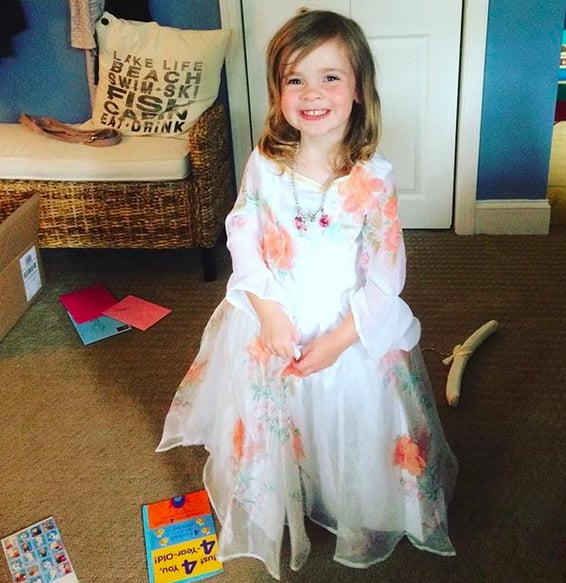 My three daughters have spent their childhoods emulating Disney princesses. In between visits to Disney World, they watch Tangled, Moana, and Frozen like it's their job, wear princess costumes more than regular clothes, and know every enchanting scene by heart. They live and breathe fairy tales, and I love how deeply they believe in magic. So when I told them they would have the chance to watch a real-life princess marry her prince at the royal wedding, they were bubbling with excitement.

Prince Harry, who I thought looked absolutely dashing in his uniform, wasn't as big of a hit with my girls.

As excited as my girls were, I have to admit that I was just as enthused (I mean, just seeing Meghan Markle's wedding dress was reason enough for me to get up at 5 a.m.!). While it was a bit of a struggle getting out of bed that early on a Saturday morning, as soon as we had breakfast (and my 4-year-old put on a dress-up wedding gown for the occasion), my girls and I breathlessly gathered around the TV. I couldn't press "play" on the DVR fast enough.

Related:
Meghan Markle and Prince Harry Are a Real-Life Barbie and Ken at Their Wedding Reception

And then . . . the girls' anticipation fizzled when things didn't get underway immediately. They were far less impressed with the arrivals of celebrity wedding guests like David and Victoria Beckham, Idris Elba, and Serena Williams than I was. As my 9-year-old said about the royal wedding, "When it got to the point, it was good." To be fair, commenting on the hats the women were wearing kept their attention to some degree until the big moment.

When Meghan finally stepped out of the car and revealed her real-life princess dress and tiara, my girls and I got so quiet that you could have heard a pin drop. Her dress did not disappoint. My 7-year-old, who was staring at the TV with more admiration and fascination than I'd ever seen, noted how the bride's veil was the best part, nailing her description by calling it "long and cool." All three of my daughters were also particularly impressed with the involvement of the kids — or the pageboys and bridesmaids, which included Prince George and Princess Charlotte — on the church steps. My little 4-year-old reported the mini royals "looked like they were having a good time." She added, "I would want to do that." Prince Harry, who I thought looked absolutely dashing in his uniform, wasn't as big of a hit with my girls. "He has a really bushy beard," was about their only takeaway from his role in the wedding. (Sorry, Harry, but it really is all about the bride!)

Overall, my daughters were dazzled by the fact that Meghan wasn't born into royalty but was still marrying a real prince. "She reminds me a little bit of Cinderella," my oldest said, watching in awe as the newly married couple drove off in a horse-drawn carriage while waving to the gathered public. And then my middle daughter echoed what most of the world was thinking as they watched the royal wedding that day: "If she can marry a prince, maybe I can, too."

Pregnancy
From Geriatric Pregnancy to Incompetent Cervix, Outdated Women's Medical Terms Are Getting an Update
by Kate Schweitzer 14 hours ago