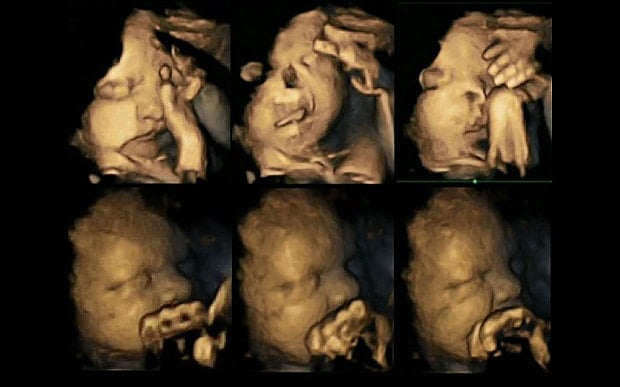 In case you needed further evidence that cigarette smoke can be horribly damaging, take a good long look at this unborn baby's grimace (top) via 4D ultrasound. Its mom smokes an average of 14 cigarettes a day. Then check out the fetus's calm and comfortable counterpart (bottom) — whose mother does not smoke. Researchers at Lancaster and Durham universities in the UK studied the 4D ultrasound scans of 20 different fetuses between 24 to 36 weeks of pregnancy and found that the babies of smoking moms had a significantly higher rate of mouth movements than the norm. As pregnancy progresses, such movement is expected to slow down.

While the doctors responsible for this pilot study acknowledge that it needs to be expanded upon with hopes to expand with a larger sample size, their belief is that babies carried by smokers may have delayed development of the central nervous system. Previous studies have also found that a mother's smoking could result in delays in her baby's speech processing abilities.