Over the last three years, Briana Hefley Shepard's daughter Rio has formed a bond with the train conductors who drive past the family's business next to the tracks every single day. Starting as soon as the shop moved to its new building with a "front row seat to all of the locomotive action," Rio would stand in front of the window waving to the trains as they passed — it wasn't long before the conductors noticed and began waving back.

"As time progressed, it became their ritual. They'd blow their whistles, she'd run to the window, they'd open their windows, and everyone would wave and smile ear to ear. I teared up almost every single time," Shepard wrote in a heartwarming post to Facebook featuring two photos of her girl waving to trains. "Then a few weeks ago, Rio started school." 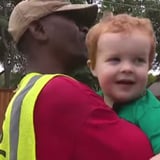 Like many parents, Shepard found it hard adjusting to her daughter starting full-day school, but the absence of the train ritual is what she says hit her hardest on that first day. The conductors held up their end of the bargain, blowing their whistles and waving with the windows rolled down, and Shepard was so heartbroken that she made a sign that read "She started school" to hold in the window the next day.

Three weeks later, a man in a neon yellow shirt knocked on the shop's door, asking about Rio.

He was there to ask about the little girl with the blonde hair that waved to the trains. He was one of the conductors and they'd all been wondering what had happened to her. Today they'd had a short train, so they stopped down the tracks, walked to our building, and knocked on our door. Oh did I cry. They had seen my sign, but couldn't make out what it said. They had assumed she'd started school, but had to make sure. He said that her waves had made their days. For three years they'd shared these moments.

Related:
After Waving to the Same Kids Every Week, 2 Garbage Men Received a Heartbreaking Note

If you're not already crying along with Shepard, brace yourself for the next part: the man asked if he and the other conductors could do something special for Rio, and now will be sending her birthday gifts in a few weeks.

"Witnessing their unconventional friendship over the past several years has been nothing short of magical," Shepard wrote. "To know it impacted them just as much as it impacted us, fills me with love and hope. The visit today and their ongoing kindness to Rio has reaffirmed my faith in goodness and humanity. These are moments we'll always remember."

Toddlers
My Toddler Licks Literally Everything, So I Asked 3 Doctors If I Should Be Freaking Out
by Sydni Ellis 2 days ago

Little Kids
Why Didn't Anybody Tell Me That My Kid's Growing Pains Would Be So . . . Painful?
by Kate Schweitzer 2 days ago