No parent could ever fathom losing a child, but blogger and mother Katherine Hill shares how she found life after the unimaginable and coped with the loss of her daughter in this post originally featured on Scribbles and Crumbs. 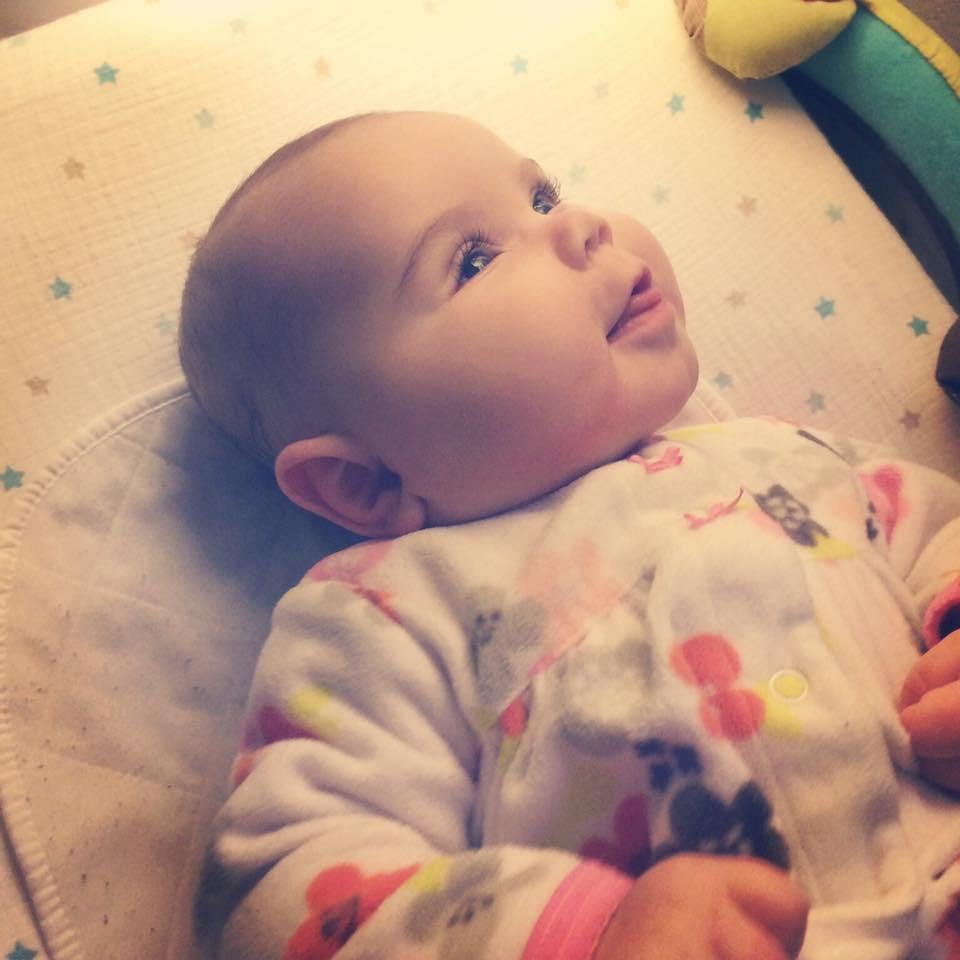 Actual spontaneous laughter. It was my first moment of pure, unadulterated, guttural loud and goofy laughter since Graysen died. I can't quite remember the who, where, or why, but I remember hearing the sound of it and feeling like a new version of myself was waking up. The cackle followed by the full-bodied giggle that takes your breath away. The sound was an echo of my old familiar self. The sound was one that used to happen so frequently and so classically me that it was how people found me in a crowd. I heard it coming out of my mouth, felt it with my entire body, and stepped outside myself to watch this new person begin to experience life again. She was unrecognizable to me at first. Her face had new wrinkles, frown lines and worry lines, and a sunken posture. I took another long look at this new self and I also saw knowledge, patience, depth, and courage. This was not the face of a woman who had given up. I saw the sparks of hope flicker in her eyes. This was the face of a woman allowing herself the vulnerability to feel emotion and also to ask herself "What's next?"

The two year anniversary of my daughter Graysen's death is upon us. She was my focus, my determination, and my motivation. When she died I felt defeated, deflated, and unable to feel anything but heaviness and loneliness. I lost the ability to feel sad, and I just felt nothing. I was a robot going through the motions and smiled because I thought people would feel less sad for me if I did. I existed simply to make others feel better so I didn't have to worry about them worrying about me.

The moment I truly began to live again was when I owned the hard stuff — the pain, the trauma, the memories that still make me nauseated. I started to embrace my truth. It did not feel good, but it felt real and better than numb. When asked, I started telling people "Yes, my daughter's name is Graysen, and she died." I used to anticipate the uncomfortable questions going around a group of people, and I used to either quietly wander away from the group or simply answer 'no.' These moments made my heart race, pits sweat, and legs tremble. These were signs from my body telling me NO! This isn't you. This isn't your truth. You can tell it, and people won't crumble. If they do, you can handle it. I started playing around with the language, the story I had to tell and decided to brave their reaction instead of leave a conversation feeling self-edited and dulled.

Those phrases are so limiting. I had used them frequently to soothe others. It quickly cut off a potential healing conversation. I prejudged situations and people out of self-preservation. I lived in fear of friends I desperately needed, abandoning ship because it was too hard to hear about. People let conversations feeling my strain to feign positivity.

I come alive when I am able to tell people that I fight a constant ache for something that I cannot have. To ask for a friend to lean on. Spending two hours watching Gray's videos and wanting to talk about her. I love to talk about Gray, brag about her like the proud mama I am, and to show people it is okay to speak lovingly and happily about a child in Heaven.

Guess what? Every time I decided to take a chance and honestly explain my feelings when asked, the reaction was that of initial shock, then a look of relief that I was actually expressing emotions. That look of relief showed me how very little I had been living previously and that this was a giant step forward.

I am different than before. I stopped trying to recreate my former self, and now I work on loving my new self. My heart will always hurt. I can pinpoint the exact spot on my chest that will always have that dull throb. Now, instead of trying to either ignore or alleviate that pain completely, I work on identifying and celebrating anything and everything that helps it hurt less. This is my life work.

What helps it hurt less? It is ever-evolving. One day it is simply listing to the wind chimes on my balcony and imagining Graysen and I laughing and singing together. It's three straight hours of karaoke with my favorite people. It was the first prick of the tattoo needle as it wrote the lyrics to Graysen's favorite song on my chest where she slept. It's going to Netflix and seeing that the entire series of Gilmore Girls is available whenever I want or need it. It's when friends just sit by my side, listen, distract, and laugh along with me. It was today when a coworker came up to me and told me how much she relates to my writing and that after the loss of her mother she was glad she had my writing to help her hurt less.

We knew Graysen was going to die. All of the sudden our people were instantly in the PICU with us. Our friends, nurses, doctors all gathered in a circle around Gray's bed that I sat in, clutching her to my chest and breathing her in. We told her all the stories we had envisioned sharing throughout her life. We gave suggestions regarding who she should meet in heaven, be it celebrities, historical figures, relatives and pets. We regaled her with embarrassing stories about her mama dancing on a bar in Cancun and falling off it. She heard tales of her dad's romantic pursuits throughout high school. Stories and advice came fast and furious from all over the room, and we erupted into gigantic belly laughing. What I only realize now as I type these words is that the last sounds my baby heard as she gracefully and bravely exited this world, were of her mama's wild laughter. My last gift to her. To hear my laughter again is to begin living again.

Katherine Hill is a Warrior Mama to Graysen who can be found currently flying down a hill on a scooter in heaven. She is an occupational therapist and blogger who writes about her quest to help it hurt less. Infant loss is sad, but this topic should not be silenced. The more we speak openly and honestly, the less lonely we will all feel. Find her on her blog, on Twitter, or on Instagram.