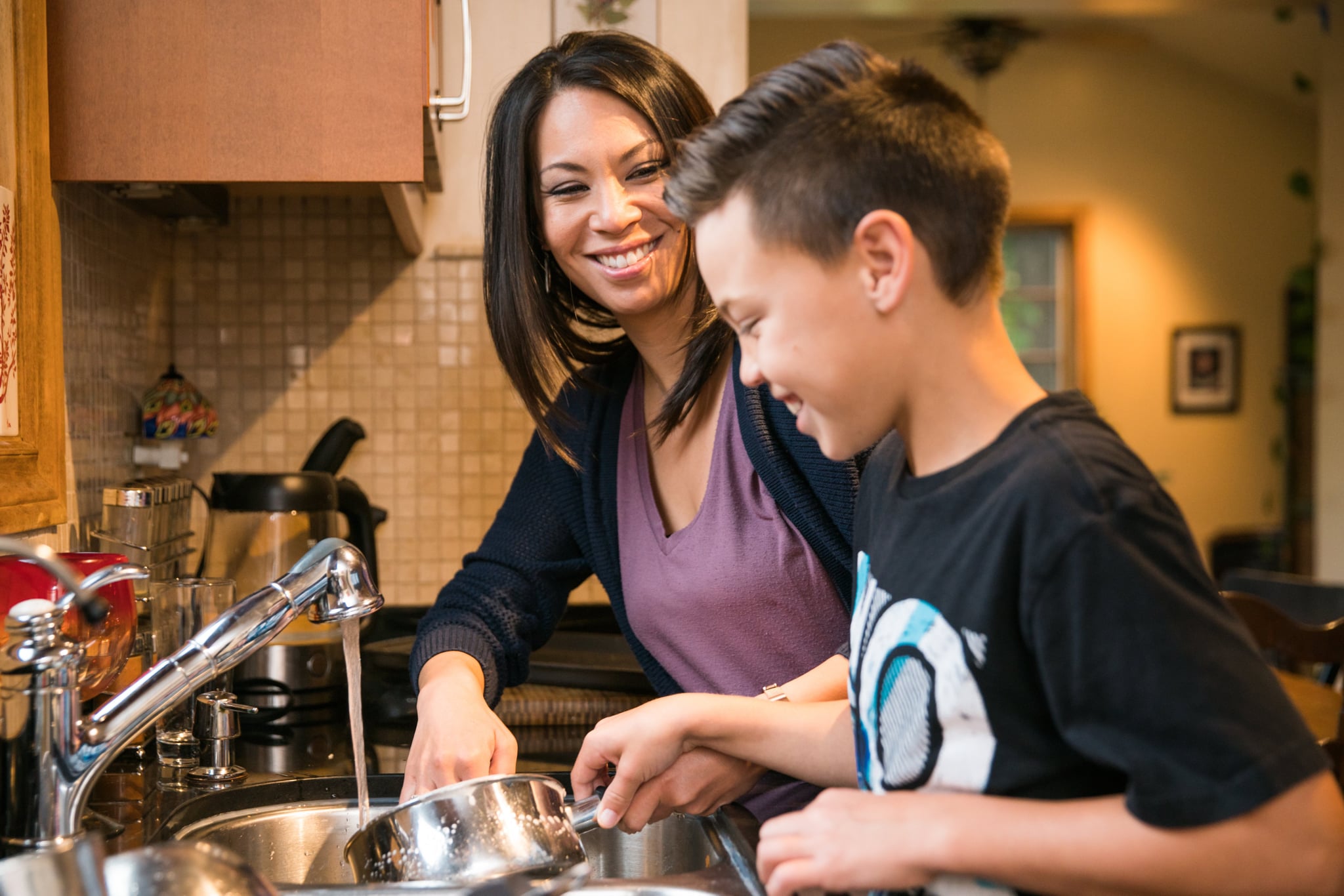 Over Thanksgiving break, my mother pulled me aside to tell me about one of the many funny comments my daughter had made to her in confidence. "She told me that, when she has kids, she's going to make them do their own laundry and dishes and make their own beds." This was funny because my daughter, who's 6, has never done her own laundry, leaves her dirty dishes wherever she sat while consuming the food I prepared, and has made her bed exactly twice, both times very badly.

Knowing that she has the maturity and perspective to realize that this situation was not one she wanted for her own future family was an eye opener to me because one: it meant that she's a lot smarter than I give her credit for, and two: it means I'm a total sucker who needs to put a lot more responsibility on my kid's plate and stop acting like the only person capable of keeping the house tidy.

It's not the easiest mental transition for me. I grew up with a mom who did everything for me and my brother. She woke us up every morning with a happy song, made our beds, and often delivered me breakfast in my bathroom while I was getting ready for school, knowing it was the only way she could get me to eat before leaving for school.

Even though she hated cooking, she made us a hot meal every night, which we ate together as a family. She turned on lights for me when I was reading in a dark room and often delivered me a snack while doing so. She was (and is) the most prolific doer of laundry I've ever met. I never remember her asking me to pick up my room even once. She basically served her kids like we were Midwestern royalty.

Related:
My Mom Is My Best Friend — and It Shaped Me as a Mother

All those efforts have now been ingrained in my head as "what a mom does," but trying to live up to those standards while working part-time and living in 21st century America is beginning to seem like a losing battle. And, seriously, why shouldn't my kid, now that she's old enough, start pitching in?

And, seriously, why shouldn't my kid, now that she's old enough, start pitching in?

A couple of days after my daughter's speech to my mom about how she was going to parent differently than me, I decided to see what would happen if I adopted her "kids should help" philosophy — in baby steps, of course. I asked her to hold garland while I decorated our banister and hand me greenery while I Christmasified our front planters. After every meal I made her, I reminded her that she needed to take her own plates to the sink. When she asked me for a snack or water, I reminded her where the pantry and water dispenser were. I told her it was her responsibility to start putting her own laundry in the hamper and to help me weed through her dresser and closet for clothing that no longer fits.

For the first day or so, she seemed to like her new responsibilities. "You're treating me like I'm an adult," she told me in a tone that seemed like she thought that was a good thing. But the allure of grown-up responsibilities and chores was quickly lost. "I'm only a kid," she told me on day three. "I can't do all this stuff moms are supposed to do."

Related:
Genius Chore Chart Ideas to Get Kids Into a Routine

Well then, I asked her, how did she expect her own children to do all those tasks she was planning on passing over to them? "I guess I'm going to have to do it for them," she replied. And could I please get her a bowl of grapes, a glass of lemonade, and her iPad? She was too tired to leave the couch. I obliged — this time, at least. After all, I want her childhood to feel stress-free and undemanding like mine did. So I'll keep doing her laundry for now, but the next snack? That's on her.

Little Kids
It Sounds So Easy, but This Tip About Getting Picky Toddlers to Eat Never Occurred to Me
by Maggie Panos 5 days ago