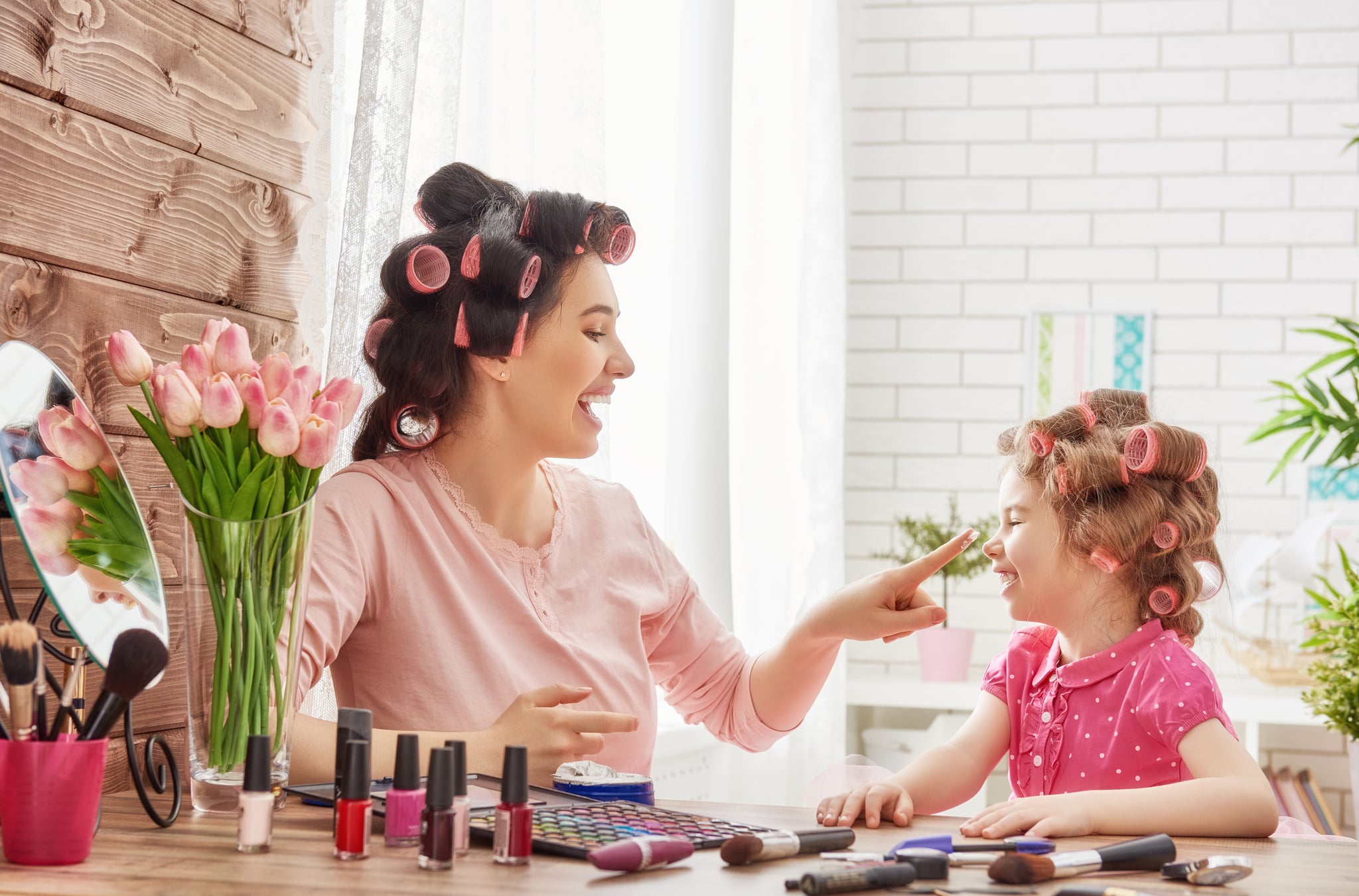 I am a walking contradiction.

I own probably seven shades of the "perfect red" lipstick/gloss. I know of almost every beauty trend that women over 30 can pull off without looking foolish. From cleansing oils and the latest trends in exfoliation — Korean rice enyzmes, anyone? — I love beauty!

As a child, I devoured my oldest sister's drawers, picking through and trying out her lipsticks. Wet n' Wild. Brucci. CoverGirl. Maybelline. From jingles to brand names regarding makeup, I knew them all. Besides, I grew up with four other women, and there was plenty of makeup to be had. Yet when I hear about all the makeup parties and clearly gendered "girls' parties" that kids have these days, I feel conflicted.

My daughter, who is 5, is much like I was: she took out my mascara the other day and "expertly" applied it to her eye . . . and cheek! When she was 3, she asked me why she couldn't wear red lipstick like me! (EGADS, CHILD: NO!) Her favorite birthday gift this year came from a grandparent and was a Barbie makeup kit. She is not much different than I was as a child, but still. The gendered parties. The makeup and dress-up. It doesn't start in elementary school, but rather as early as 3, 4, or 5. As a child, no one would have thought to have done such a thing. We might have asked someone to paint our nails or attempted it ourselves, but it wasn't part of the early childhood conversation, if you will.

It bothers me. And in bothering me, I feel like the worst hypocrite on the planet. There I am, the mom who always looks put together, getting "concerned and upset" over makeup parties for young girls. How can I challenge the idea if I cannot put down my own mascara wand?

I wear makeup to look better. I don't overdo it unless it's a fun night out, but I wear enough to not look too tired and to feel a little brighter and more awake, something most moms can relate to.

If girls at three are already indoctrinated to believe makeup is an absolute part of being female, won't they then be asking us for makeovers and facials as early as 10 years of age?

If they spend a lot of time at the mirror now, does this mean that then they will spend their whole lives looking in the mirror too much?

2. Are We Moms Looking in the Mirror Too Much? Am I?

I need to put the mirror down sometimes. My Type A self is critical and could use a little letting go and easing up.

Is it a crime to love makeup? No. As a former actress and TV personality, to me, makeup is theater. It is play. It is creative. It can be art.

But perhaps my own desire to look in the mirror is beyond art and more about approval/disapproval.

Am I pretty? Am I good enough?

These questions labor me and really don't do anything productive for me.

I don't want my daughter to get to that point. If she starts out at age 5 with this habit of "the mirror," might she too end up constantly facing herself with those questions? If we start little girls with this ritual too soon, even in play, it can become more than ritual and more like "self-scrutinizing" hell.

I have to admit, when she was 1 and 2 I hadn't worried about my own appearance habits, but now that I have a parrot, well, I felt I ought to look closer.

3. Makeup as Theater, Not as Appearance

If we want little girls to explore their own curiosity about makeup, perhaps we can pose it as theater. As making ourselves look like a character, or as fun, rather than as an absolute must.

My daughter is theatrical like myself, and I already see a future in theater for her. This is wonderful! This is where makeup artistry becomes alive, a true craft.

So if your little girl is obsessed with combing through your makeup bag, can you make it about camouflaging faces into something cool and new? Can it be about color? About character? Does it always have to end in "pretty?"

4. The Difference Between Playing With Makeup and Gendering a Party

Playing with makeup at home is one thing.

Making it a focus of celebration at an early age is what I question.

For one, my birthday parties were not segregated by gender as early as they are today, and I suspect some of this comes from schools wanting all kids to be invited OR all girls or all boys. For me, it was cheaper to invite all the girls at least from my kid's school, although my friends and family members brought boys to the party. It was a bounce party — something kid-fun and friendly and easy, not enveloped in "princess culture."

And for me as a kid and for my daughter at all of her birthday parties thus far, there was a fun freedom in having birthdays with games, music, and food that did not revolve around "girl" or "boy" activities.

I just think we are so deep into this "princess culture" that we are finding a hard way to get back out.

I love a mani, a pedi, and a good facial more than the next woman, quite frankly, but when girls start all of this so young, there is only more to ask for, more to expect from us as parents . . . and more from them to expect from themselves as they grow into kids.

Are boys going to parties that elevate and speed up the growing up process like girls do? It's one thing to play dress-up and another thing to mimic exactly what Mom does. And keep in mind that Mom is significantly older than her daughter.

Boys may request a "video game" or paintball party to do what Dad does, but number one: they do this as they get older and not at such young ages.

Number two? Makeup is more than play and theater. It's also tied to image, appearance, and intrinsic value for many people. To start so young "making up?" It's starting off in the world too soon.

I love my makeup and don't ask me to breakup with Sephora, ever. But I only wish for people to let little girls slow down a bit. They are growing up before they even realize they are growing up. This is our fault as a generation. So how do we slow it down?

For me the answer is this: I put the mirror down more, I don't run a brush in her hair too often to "fix" her hair — instead I let it be, and I remind her each day when she asks why she can't wear makeup until she's an adult:

Family Life
Much Like My Family's Experience With Autism, COVID Taught Us to Cherish the Little Moments
by Shazi Visram 16 hours ago

Netflix
As Someone With Mild Cerebral Palsy, Special Helped Me Feel Seen For the First Time
by Kelly Douglas 1 day ago