Racheal Richard McKenny, a mom of two from Florida, is warning parents about a popular mall snack that's aimed at kids after her son Johnny suffered a serious asthma attack shortly after ingesting it. In a now-viral Facebook post, Racheal explained how letting her kids indulge in Dragon's Breath — a liquid-nitrogen-infused cereal treat that makes it look like a person is breathing fire — almost cost Johnny his life.

"We took the kids up to The Avenues mall in Jacksonville yesterday," she wrote. "On our way out, we let the kids split one order of the Dragon's Breath cereal treats. They had fun and it seemed harmless enough. We left the mall right after that and started the 40-minute car ride home. About 10 minutes into the ride home, Johnny started an occasional cough. Around 20 minutes in, the cough became really consistent."

What Parents Need to Know About Asthma in Babies, According to Experts

Although Johnny has had a prescription inhaler for five years, he's rarely had to use it. Regardless, Racheal always ensured she brought it along if he was doing a physical activity like riding his bike or hitting a theme park for the day. She also kept a nebulizer at home just in case. But unfortunately on the day in question, Racheal didn't pack his inhaler.

"By the time we passed the Palencia subdivision, he was coughing so bad that he was having trouble catching his breath," said Racheal. "We knew he couldn't breathe, and we knew that we couldn't get him to the hospital in time."

Racheal could tell Johnny was in serious danger and knew she needed to get her son help ASAP — that's when she made the executive decision to pull over at a local fire station.

"If you know someone that has even just a mild case of asthma, do NOT let them have this snack."

"We were able to stop at the fire station and the EMTs were able to immediately start Johnny on an albuterol treatment and hook him up to an IV while preparing him for transport," she explained. "The nebulizer was not improving his breathing at all and, by the time they got him loaded into the ambulance, he needed a shot of epinephrine."

After Johnny was transported to Flagler Hospital, Racheal knew she had to warn other moms and dads whose kids have asthma about his close call.

"PLEASE, if you know someone that has even just a mild case of asthma, do NOT let them have this snack," she said. "I should have known better, but it did not occur to me that this food could have this effect. As a result, my son could have died. Please don't make the same mistake I did." 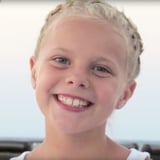 Thankfully, Johnny is home from the hospital and recovering well. The vendor in question also immediately updated the allergy warning by the kiosk, in hopes of deterring similar incidents.

"It looks like the kiosk has now updated their sign to include an allergy notice with a list of the ingredients, as well as an asthma warning," explained Racheal. "Hopefully other vendors will now update their signs as well to help prevent this from happening again." 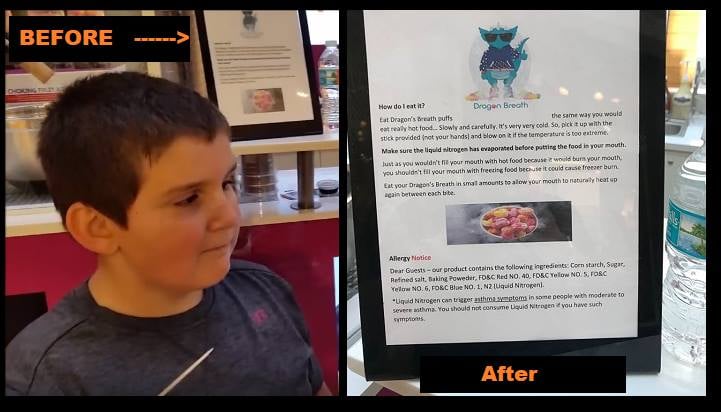