The following post was originally featured on Bugs, Dirt, & Mommy and written by Jenifer DeMattia, who is part of POPSUGAR Select Moms. 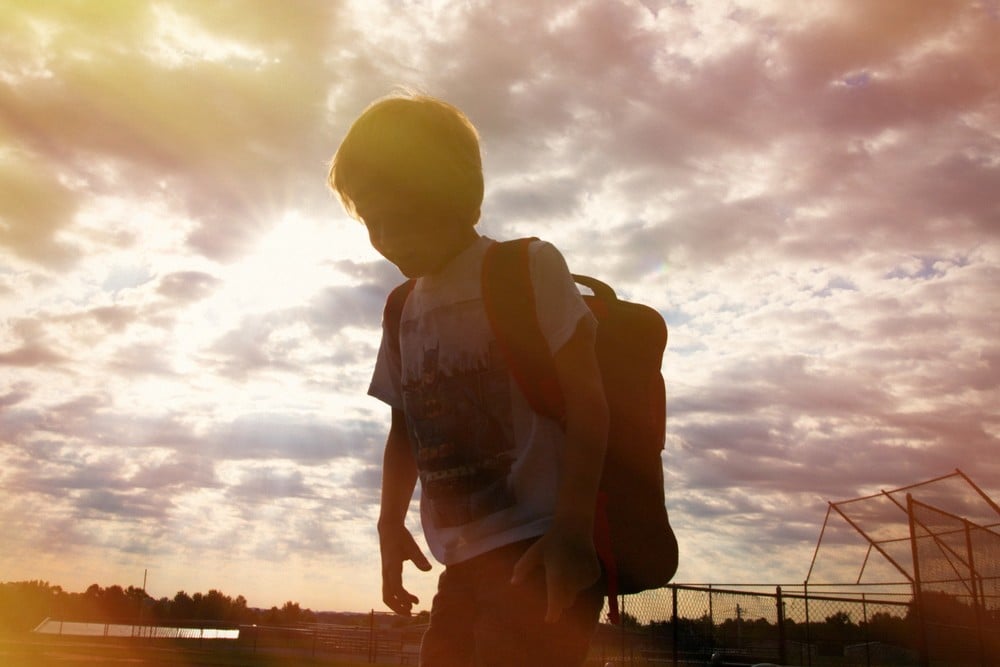 "You know your children are growing up when they stop asking you where they came from and refuse to tell you where they're going." — P.J. O'Rourke

The only thing that saved my grasping heart was the excitement he belted out as he put his skinny arms through the straps of his Avengers book bag. "Oh thank God, he's still a small boy." But as we approached the now massive building I couldn't help but feel that certain ping in my stomach, the one that always reminds me he can't do it yet because I don't really want him too. I frequently waver back and forth between letting him be his own person and diving full throttle towards the floor just to tie his shoes for him one more time. Elementary is a word defined as easy, basic, and even straightforward. The easiest part about the first day was the decision to use my arm to wipe the snot and tears off my face as I walked home from dropping him off. My son taught me that little trick. But uncomplicated, I think not. Nothing about parenting comes without complications, not even when someone agrees to watch your kid for six and a half hours every day.

When the double doors closed in my face with a theatrically loud thud I turned and looked at his brother in the stroller. Suddenly the two of us were like an old married couple with nothing to talk about but his brother or the weather. Every five minutes he asked where his brother was, and I told him to look at a cloud. Good thing he's only 2 and hasn't yet realized his mom must be crazy. Soon enough. I was so worried about my son's behavior but ironically I was the one who got in trouble on the second day of school. I had penetrated the first wall of defense but was quickly ambushed from behind by someone with a nametag hanging from her neck as I attempted a stealthy walk with my son to his classroom. The woman looked me in my eyes and knew. She nicely reminded me that I was only allowed to walk him on the first day and now I just leave him at the entrance.

But I have so many questions. And when my chatty son returns home he suddenly becomes silent. It's like his version of Fight Club. "Whatever happens in kindergarten stays in kindergarten." Is he listening to the teacher without arguing back in Angry Bird speak? Is he eating all of his lunch? Is he peeing with the door closed? If he's using a urinal, is he peeing with his shorts to his ankles like I have asked him not to do a million times? Are kids laughing at him because he can be a little intense when talking about playing Battle Wars? A game he made up but just assumes everyone knows about. Is he scared? Is he anxious? Is he being nice? Is the day too long for him? Am I crazy?

And so every day for the next however many days I will continue to leave him at the door and watch through the rectangular glass as my boy walks down the hallway hand in hand with another woman, no doubt another mom who has experienced the same moment as me. And I will grasp on to the crazy hope that every person inside that building sees my son, gets to know who he is, and treats him as they would their own. For a good portion of the day, I need to trust they will keep him safe and excite his mind. That they will see more smiles and inquisitive eyes than whining and tears, and that he will find a friend just as quirky as him.

My PTA check has been submitted and I will surely burrow my way through their fortress of a school, but this, my friends, is where it truly begins.

Never have my son and I been in a more separate place. A new world has opened up for him, a world where he gets to leave his parents behind for a bit and explore this new space. And for me, a new normal is also emerging. One where I have to learn to embrace the unstoppable force of a kid who wants to grow up as fast as he can, with no way of letting him know he's better off slowing down. So on the way back from dropping his brother off for his second week of kindergarten, the little guy and I stopped at the baseball field and ran the bases for a bit. I've decided I can't stop my boys from wanting to grow up, but I can teach myself to grow down. I showed my son how to make a grass doll, something I used to do at recess when I was in elementary school. And now that I think about it, elementary school did seem easy at the time. It did seem fun for me and I do have amazing memories. And the bottom line is, I think I just desperately want that for my son.

So what I have discovered from my son's first week at kindergarten is that we all did it. All the anticipation of this new beginning and now after only a week, it's like this is what we've always done. Such is life. The hardest part is always letting go of what we are used to. But after the initial first steps . . . it just becomes another layer of who we are. I have to keep telling myself that I will be ok because I will continue to get it wrong, and the same goes for my son. So I have decided to look forward to our failures. After all, it's the only way we'll learn.

Image Source: Jenifer DeMattia
ParentingBack To SchoolKindergartenSchool
Around The Web