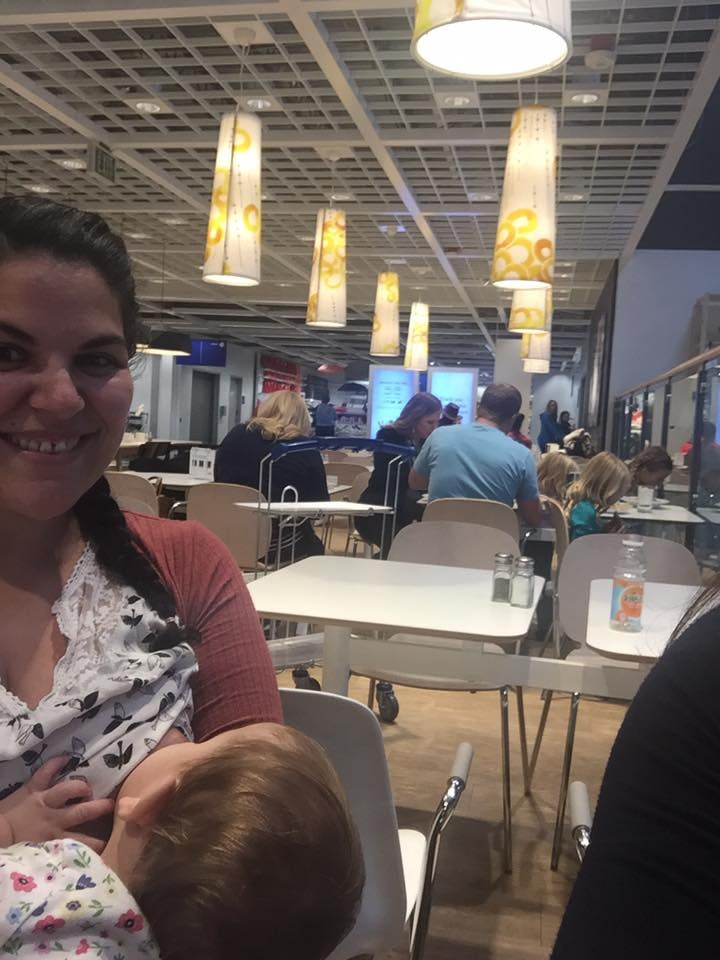 During a quick lunch at Ikea, Patty Fishback had a "When they go low, we go high," encounter as a result of breastfeeding her baby. Surprisingly, it wasn't a male or a childless adult who shamed the mom-of-three for feeding her baby in public, it was a fellow mother.

Patty was eating with her husband, sister, and two daughters when her 9-month-old began signing for milk. "So I did what many hungry nursing mothers do: I put her on my lap and began to breastfeed her while I continued to eat," Patty posted on the private Facebook group, Pantsuit Nation.

According to Patty, a pregnant mom walked by with her three daughters in search of a table and settled on the one directly next to her family. "I smiled at them and all three girls immediately began to gawk at me and the oldest one even pointed directly at me and loudly said, 'Ew gross!'" Patty wrote. "The mother looked at me, sneered, and hurriedly insisted that they go find a table elsewhere, all the while scoffing about my public display of 'indecency.'"

When the stranger's husband found his family at the new table, she pointed at Patty and began talking about her. "My sister noticed immediately and joked that she wished she had a baby to nurse with me in solidarity; my husband sort of looked as though he was braced for impact, knowing full well that I'm not one to shy away in such circumstances; and I brooded about what I wanted to say to the mother when we left and walked by their table on the way out," Patty wrote.

Instead of directly engaging the woman, Patty simply decided to continue nourishing her baby while also appreciating the fact that there are laws in place that protect her right to do so. "And as I walked by the judgmental table on my way out, I smiled again and made the conscious decision to take all three of my children (including my little nursling) to my local Las Vegas Women's March, in the effort to continue raising my children to be open, loving, accepting individuals who take the high road whenever possible."

Kid Activities
Disney Launched a Princess Hotline For Kids to Get Messages From Moana, Tiana, and More!
by Alessia Santoro 4 weeks ago