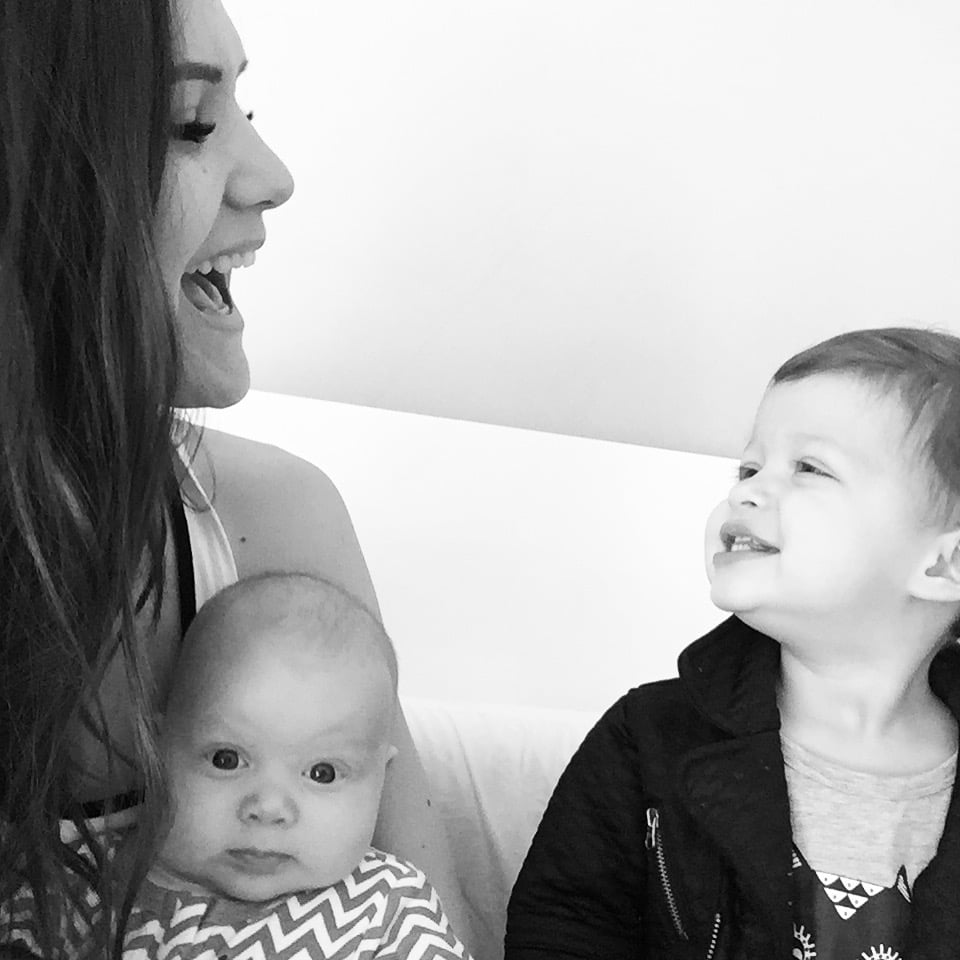 In Teagan Gambin-Johnson's "about me" section on her blog, Two Kids Raising Two Kids, the mom makes it completely clear that her mission is to "reach and connect with as many women as I possibly can," which makes the fact that she shared the deepest details of her experience with postpartum depression unsurprising. However, her thoughtful post — a part one that's to be continued in future — can benefit so many women who may not feel comfortable talking about their own experiences or don't know where to start.

Calling the Thursday afternoon when she realized her postpartum depression had hit a breaking point the "lowest point of my parenting journey to date," Teagan goes on to explain how she was admitted to a Mother and Baby Psychiatric Unit [MBU] — the scariest thing she's ever done — once she could no longer cope with her anxiety. Despite that initial fear, this experience is one she's now truly grateful for and feels the need to share with other women.

"Sitting here five months later, it's hard to pinpoint when it all started," the mom wrote in a post to her blog. Teagan then shares a bit of backstory on what life looked like after she and her partner, Nick, welcomed their fist child, Charlie. Because she was such a good baby who slept through the night and was always happy, their lives were filled with fun daily activities and Teagan found herself able to cook and manage her household in alignment with her "OCD tendencies and anxiety." However, once her son Cooper was born in 2016, that's when something shifted.

Cooper was also a good baby, but he was very typical of a "normal" newborn. I struggled to help Cooper get into a routine, because I was still trying to carry on with Charlie's daily activities too. At the same time, Charlie was going through a major developmental stage, and that, added with the arrival of her little brother, resulted in major tantrums and a massive change in Charlie's demeanour.

The adjustment to two kids was HUGE for me. I would try to leave the house and manage to get one kid ready, but by the time I had the other ready to leave, the first would have vomited or pooed or needed to change their clothes. By the time we got out, both were overtired and cranky. I felt like I was taking one step forward, and the kids would drag me five steps back. Life seemed very unproductive, and I began to feel unmotivated and guilty. . . .

I'll never forget one particular day when I decided to duck into Priceline after a morning at the gym. I had Cooper in the pram, but Charlie's attachment was still in the car so I let her walk beside me through the shopping centre. When we got into Priceline, Charlie ran an absolute muck. She was grabbing everything she could reach off the shelves and even pushed a display over! I couldn't control her while also trying to stay by the pram and Cooper, so I grabbed her into my arms and walked out. As I walked out of the exit she punched me straight in the eye, and I burst into tears! So with a toddler screaming in one arm and pushing the pram with the other, I managed to call Nick as I bawled my eyes out walking back to the car. I shoved Charlie into the car and slammed the door behind her.

I was shaking and couldn't stop crying, and kept telling Nick that I was scared to get in the car because I didn't want to be around Charlie. I felt so out-of-my-mind crazy that I was literally worried to be near her because I didn't know what I would do. . . . I felt like an absolute failure.

Teagan admits that before her PPD hit, her and the kids would have good days and bad, but even on the worst days, she would put them to bed and miss them, excited for the next day. Following the onset of her PPD and this incident with Charlie, Teagan felt an even deeper shift in her overall mood and attitude, especially when it came to her daughter. "It breaks my heart to say this, but I began to resent her," the mom admitted, sharing that she would see her daughter walk into the room every morning, look at her, and "feel completely numb."

Related:
Chrissy Teigen's "Open Letter" on Her Struggles With Postpartum Depression Is a Must Read

Leading up to her breaking point, Teagan described her days as being very isolated and emotional.

I didn't want to get out of bed. I didn't get changed out of my PJs. I didn't want to leave the house any more, I began to cancel on friends and I stopped replying to messages. I would call Nick in tears most days and beg him to come home from work. I didn't eat. I didn't sleep. I would yell and scream. I smacked. I would cry over anything – some nights I would lay in bed and cry myself to sleep, or even worse I would wake up in the middle of the night and just cry.

Nick didn't know what to do. I was treating him like sh*t, and he would put up with it to a point, but would eventually retaliate back at me, which would make it worse. I reached out to my family, but they didn't realise the extent of the problem. I felt so alone. I couldn't believe that this was what my life had come to, and I didn't want to live it. I wanted to run away. When I would cry at night I would think about getting in my car and just driving away.

It wasn't until Teagan texted her friend in the middle of the night that she felt there could possibly be relief from what she was feeling. She outlined for her friend what had been going on in her life, saying she felt everything was "broken," and received a candid "Well we're going to try very f*cking hard to fix it" text in return. The next day that same friend suggested the MBU. "It was hard to hear, but deep down I knew that what she was saying was true, and I was in desperate need of proper help," Teagan wrote.

After an appointment with a general practitioner who specializes in PPD, it was decided that the MBU was Teagan's best option, and though beds were limited, she received a call the next day informing her there'd be an open bed the following day. "I spent the rest of that day walking around like a zombie, packing my bags, and organising everything for the kids and Nick while I was gone. I was broken," she wrote. "The next day, Thursday 13 October 2016 at 2 p.m., I walked through the doors of a Mother and Baby Psychiatric Unit and I began the slow journey of dealing with my postnatal depression."

Related:
Why Having Postnatal Depression Actually Made Me a Better Mom

Although Teagan's first blog post on this subject ends there with a "to be continued," her words serve as an important reminder to the moms out there who may be having similar experiences: you are not alone, you don't have to feel "broken" forever, and there is professional help out there should you feel you need it.

Amanda Seyfried
Amanda Seyfried on How Women Are Forgotten Postbirth: "It's Grim, but It's the Reality of Motherhood"
by Kate Schweitzer 10/27

Halsey
Halsey Opens Up About Loving and Accepting Their Postpartum Body: "That Change Is Permanent"
by Chanel Vargas 10/11