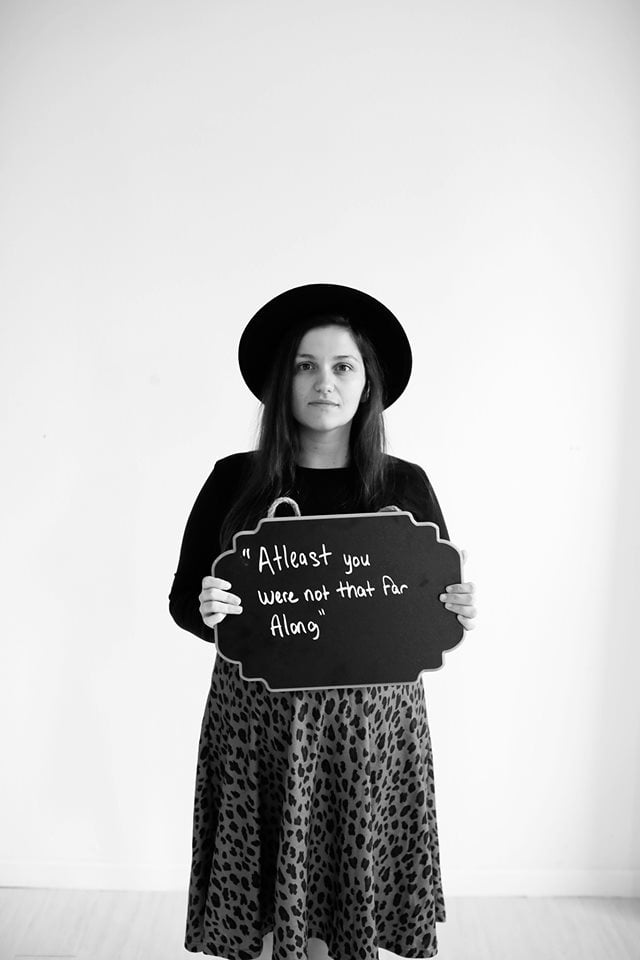 After having a miscarriage in December 2015, photographer Melanie Paterak from Atkins, AR, has experienced how difficult it can be to discuss loss. So when a woman contacted her to see if she'd be interested in creating a photography project that centered on pregnancy loss, she jumped at the opportunity to open up the conversation through a powerful photo shoot.

Melanie told POPSUGAR that she received a text with the photo shoot idea from a local woman who had suffered a miscarriage. "I told her we had also lost a baby," Melanie said. "She and I got on the phone the next day and immediately clicked. We worked back and forth for around a month planning this shoot, then put out a post asking other moms if they'd like to be involved."

After recruiting a handful of women, Melanie started the project and quickly realized that every person's experience was different. She gave each woman a chalkboard and asked each them to write something that their friends and family had said to them after their loss. As you can imagine, some comments were more helpful and validating than others. And after seeing these women be so open with experiences both negative and positive, she's encouraging other women to speak up about pregnancy loss.

Related:
Nobody Wants to Say It, but Miscarriage Gets Easier the Second Time Around

"My hope is that women who have been through loss will look at this and understand they're not alone," explained Melanie. "The title of this project was 'Positive Words.' We completely understand that during difficult times, sometimes people are at a loss as to what to say. Sometimes your heart may be in the best place with the best intentions, but in a place of grieving, we interpret things differently. We felt this project was important to show what stuck with us, both the positive and not so, and some women even shared their due dates of their rainbow baby and rainbow baby's birth."

Melanie plans to do a separate shoot revolving around the same topic, this time involving dads. Until then, she's enjoying every moment with her 1-and-a-half-year-old rainbow baby, Pierce. Read ahead to get a look at the incredibly powerful project.

Related:
This Mom's Photo Project on What It's Like to Lose a Pregnancy Is So Powerful
Previous Next Start Slideshow
PhotographyPregnancy LossMotherhoodRainbow Baby