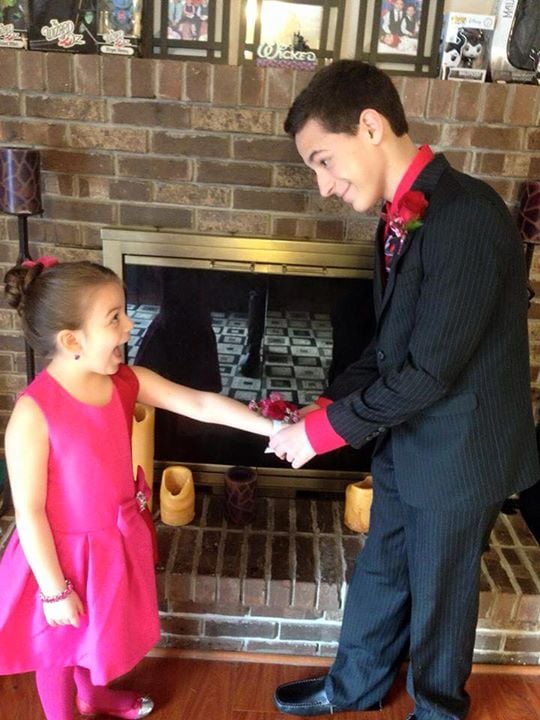 A mother's photo of her daughter getting ready for her school's father/daughter dance is tugging on the heartstrings of parents everywhere. The photo, which shows the girl's big brother placing a corsage on her wrist, looks like it could just be a family picture, but her mother's words are heartbreaking. Tricia Lanzi Santucci‎ shared the photo and story on NBC News's Facebook wall:

"This is my son and daughter. For the second year in a row, since she has been old enough to go, he has escorted her to their school's Father/Daughter dance. Their father was a police officer, killed in the line of duty in 2008. I had two boys at the time, and was pregnant with my daughter. I'm so proud of my son for stepping in and showing his little sister a great night. He is my hero."

Since being posted, the picture has been "liked" more than 400,000 times and shared more than 18,000. But it's the comments section, where other mothers are sharing pictures of their sons stepping in for the dances, that has people talking. Father/daughter dances have become a popular activity at both public and private schools over recent years, but for little girls without fathers in their lives, the dances can be devastating. Seeing how these big brothers have stepped up for their sisters is truly inspiring, and Tricia‎ is right — they're our heroes too!

Father's Day
My Dad Told Me to Make the Most of Life, and I Do My Best to Do So Every Day
by Jada Welch 6 days ago