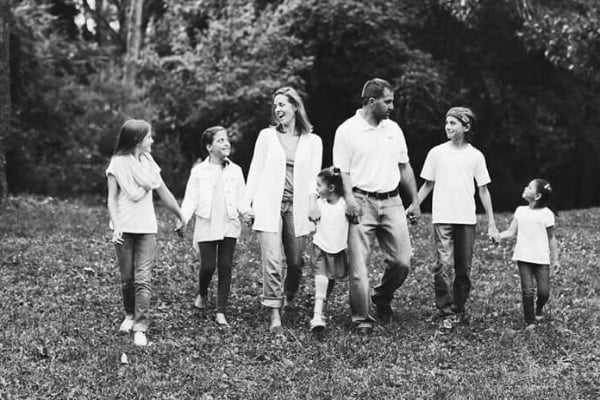 Kim and Phil Vaillancourt were already parents to two biological children when they started the process to adopt three little girls. Despite their growing brood, the couple was thrilled to learn the unexpected news that Kim was also pregnant. The entire family began looking forward to the baby's May due date.

On Christmas day, just two days after the proud parents went to court for the adoption ceremony, Kim was rushed to the hospital where she learned devastating news: both her life and the life of her unborn child were at risk.

Kim was diagnosed with stage four glioblastoma, a difficult-to-treat cancer, and quickly underwent surgery to remove two tumors that, according to her doctors, could have killed her. Since all five of her children were home from school for the holiday break, Kim would've never made the life-saving trip to the hospital over the nausea and headaches if it weren't out of concern for her developing child.

Now, the grateful family wants to give their baby boy, who they plan to name Wyatt Eli, the same chance to live that he gave his mother. Despite the fact that gliobastoma is known for rapid-growing tumors that typically reappear in a matter of months, Kim plans on postponing chemotherapy and radiation until two weeks after the birth of her son.

Even though these treatments are her best hope for survival, they would also harm her unborn child, which isn't an option for Kim. "The baby saved me. Now it's my turn to save him," Kim said to CBS News.

In the meantime, she goes in for MRIs every two weeks to look for new tumors and prays that the scans remain clean. Despite the high joys from her daughters' adoptions and the pure agony from her cancer diagnosis, the family is choosing to believe in miracles – not the median survival rate of 14 months that some doctors say could be a reality.

For updates on Kim's condition and to donate to the family, visit their Go Fund Me page.

Bindi Irwin
Bindi Irwin Re-Created a Sweet Moment From Her Parents' Pregnancy, and It's So Touching
by Yerin Kim 6 days ago