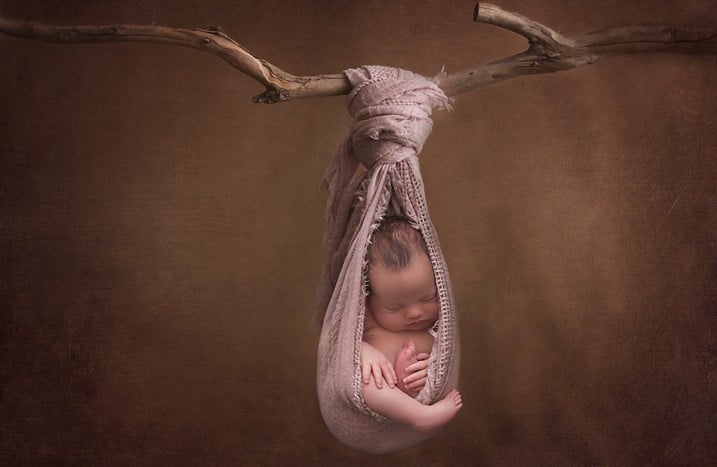 The "Secret" Trick Behind All Those Crazy-Impossible Newborn Baby Photos

Do you ever see a professional newborn photo and debate whether or not you should call Child Protective Services because it looks so dangerously captured while simultaneously adding it to your Pinterest board in the hopes that you'll be able to frame a similar snap of your own baby?

That's how I've often felt when spying those portraits of a sleeping, days-old baby hanging from a tree branch or being held high into the air by only the palm of a very precarious hand. Or curled up in a pile of ice-cold snow. Or nestled next to the belly of a resting mama deer.

How do these babies do it?!

Well, Australian photographer Tracey Smith is letting POPSUGAR readers in on a little secret: they don't.

Through clever camera tricks and Photoshop techniques that don't sacrifice a newborn's safety for a single second, Smith has created breathtaking images of babies in extraordinary poses.

But she is now sharing her behind-the-scenes process after seeing other photographers — and parents themselves — putting their tiny subjects in actual danger in an attempt to replicate those Instagram-famous shots.

"I'm saddened to see babies being placed into glass bowls, hung from branches without any safety measures, or being propped into buckets or baskets with no one nearby," Smith, who was a neonatal nurse for 20 years before becoming an accredited professional photographer, told POPSUGAR. "All of these scenarios scare me, that new photographers who haven't been adequately trained are putting babies at risk unnecessarily simply because they just don't know!"

She implores new parents not to seek out the cheapest photographer, or one that hasn't been properly vetted, in place of one who makes safety paramount: "You wouldn't just ask a friend's friend for someone to deliver your baby just because they've had one themselves, nor would you ask your neighbor's cousin's sister to cut your hair because they own a pair of scissors."

So, how do you ensure your newborn photographer is going to keep your bundle of joy safe? Ask if they do "composites," Smith recommends.

Here, she explains just what those are with five different awe-inspiring examples: