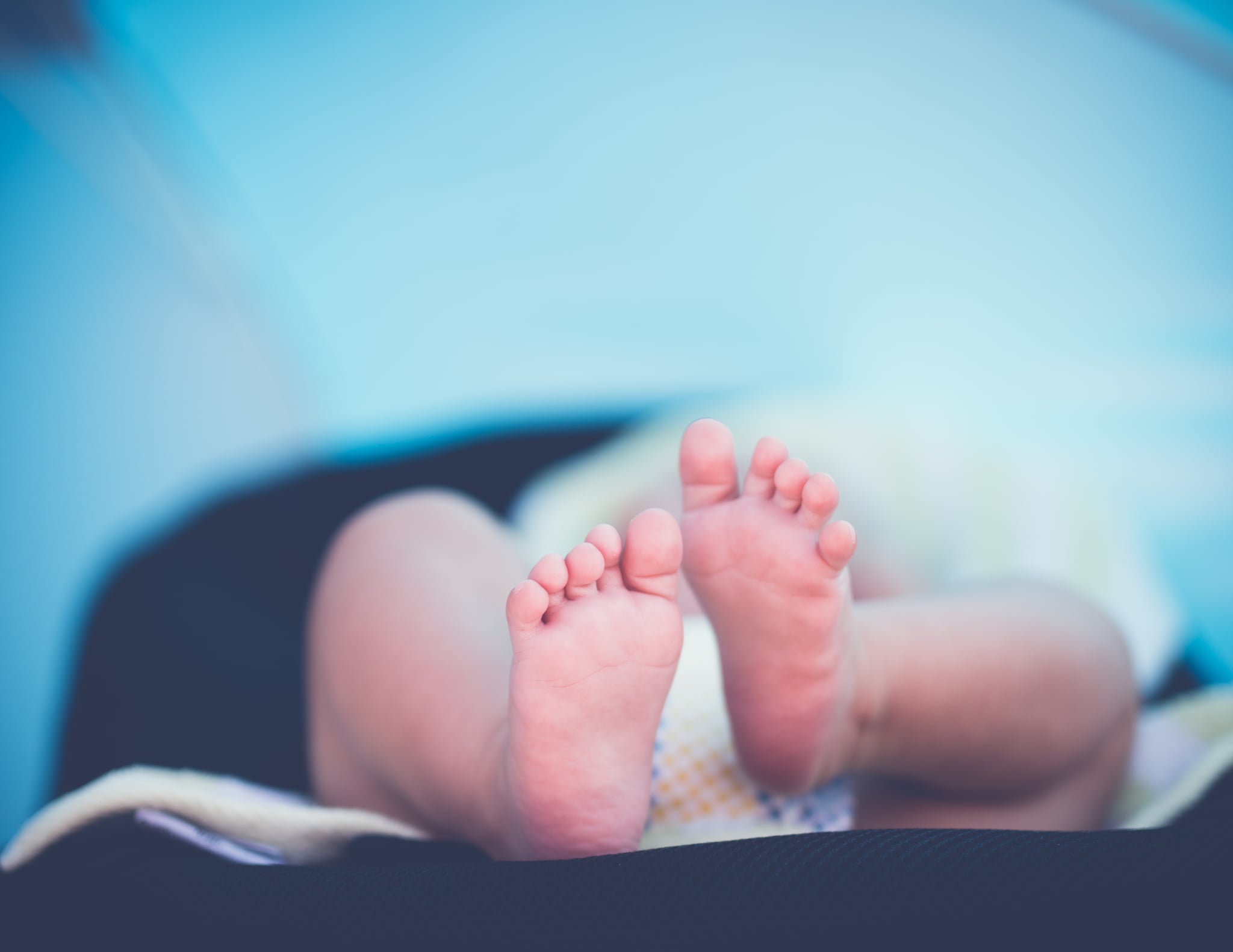 When my lower legs and feet started to swell in the last few weeks of my first pregnancy, my husband convinced me to call the doctor. I was hesitant — I didn't want to be one of "those" pregnant women who freaked out at every little twinge, and I figured it was just normal water retention — but to pacify my husband, I made the call. As it turns out, it was definitely the right decision. I was diagnosed with preeclampsia, a pregnancy complication that can be dangerous for both the mother and the baby.

My doctor monitored me closely for a week or so, but during one routine appointment, my blood pressure skyrocketed to an insanely high level. Since the only cure for preeclampsia is delivery, it was decided: an immediate induction, at 37 weeks, was an absolute necessity. Luckily, even though he came a little early, my baby boy was already weighing in at a healthy 8 pounds, 9 ounces. His lungs were developed. He didn't need any medical interventions due to his premature arrival.

There were just so many unknowns, and to a person like me, those unknowns brought on terrible anxiety.

Aside from the surprise of the induction itself, I was relieved at how smoothly everything had gone. As a first-timer, I had a ton of labor- and delivery-related worries. Pooping during childbirth topped the list, but at close second were the questions surrounding labor itself: Would I know when I was going into labor? Would my water break while I was walking around the grocery store or something? I had this terrifying vision of slipping down the snack aisle in a trail of amniotic fluid in front of horrified onlookers. There were just so many unknowns, and to a person like me — I like things orderly, OK? — those unknowns brought on terrible anxiety.

But my induction took those unknowns out of the equation, and though I was still scared (I mean, I was about to squeeze an 8-pound behemoth out of my nether regions), knowing what would come next helped tremendously. I was admitted to the hospital, hooked up to the monitors, and was administered Pitocin to get labor started. I knew exactly when it was coming. When my water broke, I was in bed with absorbent pads underneath me. And it helped me be as calm as possible considering the circumstances.

Related:
Things You Might Not Have Thought to Bring to the Hospital (but Should)

I didn't have preeclampsia with any of my three subsequent pregnancies, thank goodness. But every time, I asked my OB if induction was an option. Since my babies always tended to be on the plump side (8 to 9-plus pounds, respectively), and since I had been successfully induced without complications in the past, the doctors always gave it the green light. So I was induced three more times, each time at 39 weeks — just one week before my due date, always when the babies were fully developed and equipped for life outside the womb.

Induction of labor is a controversial topic, but in my situation, it was a godsend. As with my first delivery, it was comforting to know step-by-step what was going to happen — even more so since I had now been through it before. Since I had a specific date and time to be at the hospital, I knew exactly when to have my bag ready. I was able to make sure I was all showered and shaved. There was no urgency surrounding my check-in, and I was able to relax a little. Not only that, but it was a benefit as far as scheduling was concerned.

My husband worked a very demanding job with lots of hours, and he was able to make concrete arrangements. We lived a long distance away from our families — but knowing the date I'd be in the hospital allowed them to make plans to come help. My mother and mother-in-law came and cared for my other kids while my husband and I were bringing our newest addition into the world, and we brought the baby home to a clean house and a stockpile of meals. It was fantastic.

It isn't without its risks, of course, and if you'd rather go au natural than schedule your birth experience, I'm definitely not here to judge. For me, though, my inductions helped ease my anxieties — around labor and logistics both — and made my overall experience calmer and more enjoyable for everyone involved. And I'd do it again in a (physician-approved, hospital-scheduled) minute.