Getting around with the little ones has never been so convenient or easy. For Mom and Dad! https://www.tagabikes.com/shop.asp

A bicycle built for two takes on a whole new meaning once you see the Taga Bike-Stroller, a hybrid transportation device that combines a high-end toddler stroller with a bicycle. Inspired by the most obsessive of bicyclists, the Dutch, this Taga stroller isn't new. In fact, it's the same one the brand released nearly seven years ago. So why is the original video, first released back in May 2009, making the rounds this week?

It's anyone's guess, but we'd venture to say that today's new moms had never heard about this ingenius two-in-one product until now. The resurfaced video has 23 million views and counting, so millennials just might be second-guessing their recent jogging stroller purchases.

Curious about the Taga? The makers call the three-wheeled cargo bike "the most inspiring mode of transportation since the hot air balloon," and unlike a bike trailer or a regular child bike seat, little ones can ride right between their parent's arms.

"When you get to where you're going, toggle effortlessly to stroller mode to go shopping or pop in for a latte," the Taga site explains. "Then when it's time to go, toggle back to bike mode and continue the adventure. You'll pedal with the satisfaction of knowing Taga is a great form of exercise — and good for the environment, too."

What's more, the Taga can convert to a double-seat stroller with the purchase of an additional seat, and when kids have outgrown it, the stroller portion can be replaced with a giant cargo basket. The catch? It costs $1,495.

Think you'd like to take one for a spin? Check out some of the original promotional shots of the bike in action. 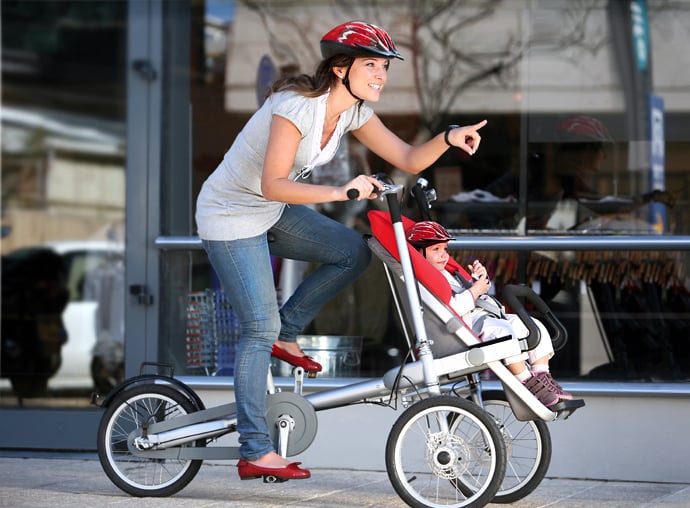 ParentingStrollersParenting Videos
Around The Web