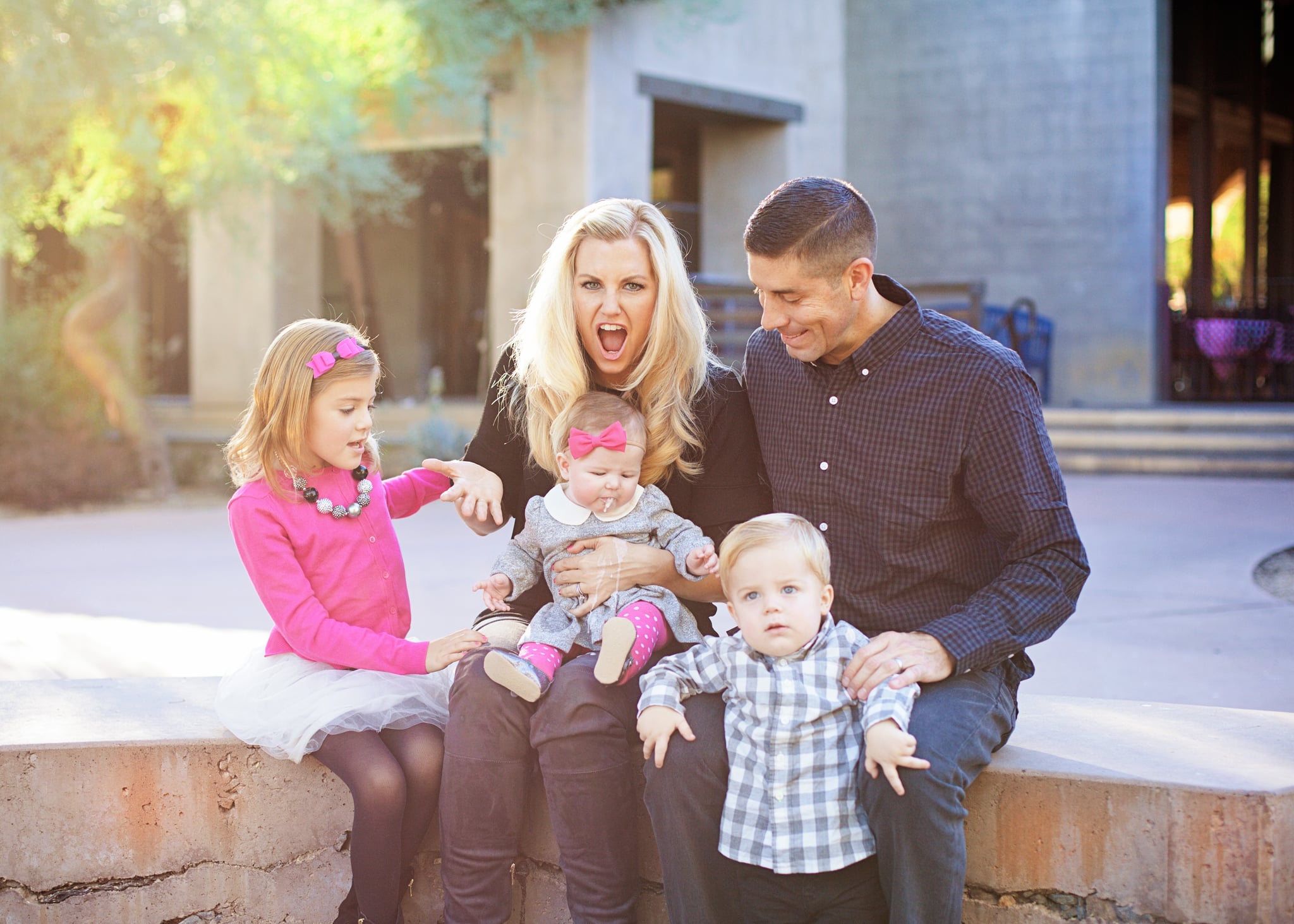 It is the most dreaded day of the year for moms: family picture day. The pressure to have the perfect shot on your holiday card sends most moms I know into a major panic attack.

Our family photos were scheduled for 3:40 p.m. on a Saturday in late October. The timing was perfect to allow for naps, baby feeding, and everyone in the house to get showered and dressed. The one thing I did not plan for was the Notre Dame football game, but more on that later.

The other thing I didn't plan for: weather. Without fail, it is well above 90 degrees in October in Arizona, yet we all still believe it will be cooler. It was exactly 96 degrees when my family of five loaded into our car wearing long-sleeved shirts, suede boots, tights, and sweaters.

We met our photographer at a grassy location — with about a dozen other families who all had the same idea.

We started out with individual shots of Peyton, my 6-year-old. She is a rock star and posed perfectly. She briefly complained that her tights were itchy, but I ignored her. One down.

My 18-month-old son, Brendan, was next. He was either terrified of the photographer or completely pissed about wearing jeans and a flannel shirt as the sun beat down on him. Whatever it was, my darling boy — on a normal day, he has a smile that could melt even the grumpiest of hearts — was stone faced. Trying to break his stare, my husband, my daughter, and I jumped feverishly up and down behind the photographer. We squeaked toys, we pretended to tickle him, and my daughter even did her famous crazy dance. Brendan refused to give in. 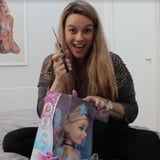 We moved on to a group shot. I realized I was so caught up in making both kids smile, I completely forgot about my 5-month-old daughter, Cameron (being the third child, I have to admit this happens more often than not). She was sitting in the stroller, cooing at her feet — where she could easily roll away or be stolen. I scooped her in my arms and we began assembling our family.

It was then that Brendan's apathy turned to rage, and the wheels completely fell off of our family photo shoot. Brendan refused to be held or stand. He arched his body backward and kicked his feet. I noticed he was wearing only one shoe. As he was screaming "NO!" and running away, Peyton began furiously scratching her legs and whining about her itchy tights.

I looked to my husband to help — he is Brendan's favorite person. I found him off to the side with his back toward me. I asked him to help get Brendan. He didn't respond. I asked again, in a much sterner tone. "Uh, yeah, sure, but let me just see the end of this drive first." He was streaming the Notre Dame game on his phone.

After much wrangling and bribing, Brendan finally calmed down and stood — emotionless — in between my husband's legs.

"This is it," I thought. "This is going to be the photo that is not only the cover to our Christmas card, but my Facebook profile picture, and surely perfect enough to enlarge on a giant canvas above our fireplace."

Related:
The 15 Moms You Meet During the Holiday Season

My angelic baby Cameron — who was perched perfectly on my lap — chose that moment to vomit all over my hands and legs. I screamed, which had a domino effect: Cameron cried, Brendan screeched, and Peyton scratched her legs. I tried to ignore it and regroup, but my son darted off after a ball into a dirt wash. My husband pulled out his phone.

I wanted to give up, go home, and have a drink. Preferably alone.

But I couldn't give up, because someone had the bright idea to include our extended family for group pictures. As I was wiping spit-up off my pants with the corner of Cameron's $45 J.Crew dress, my mom, dad, and sister's family of four arrived. 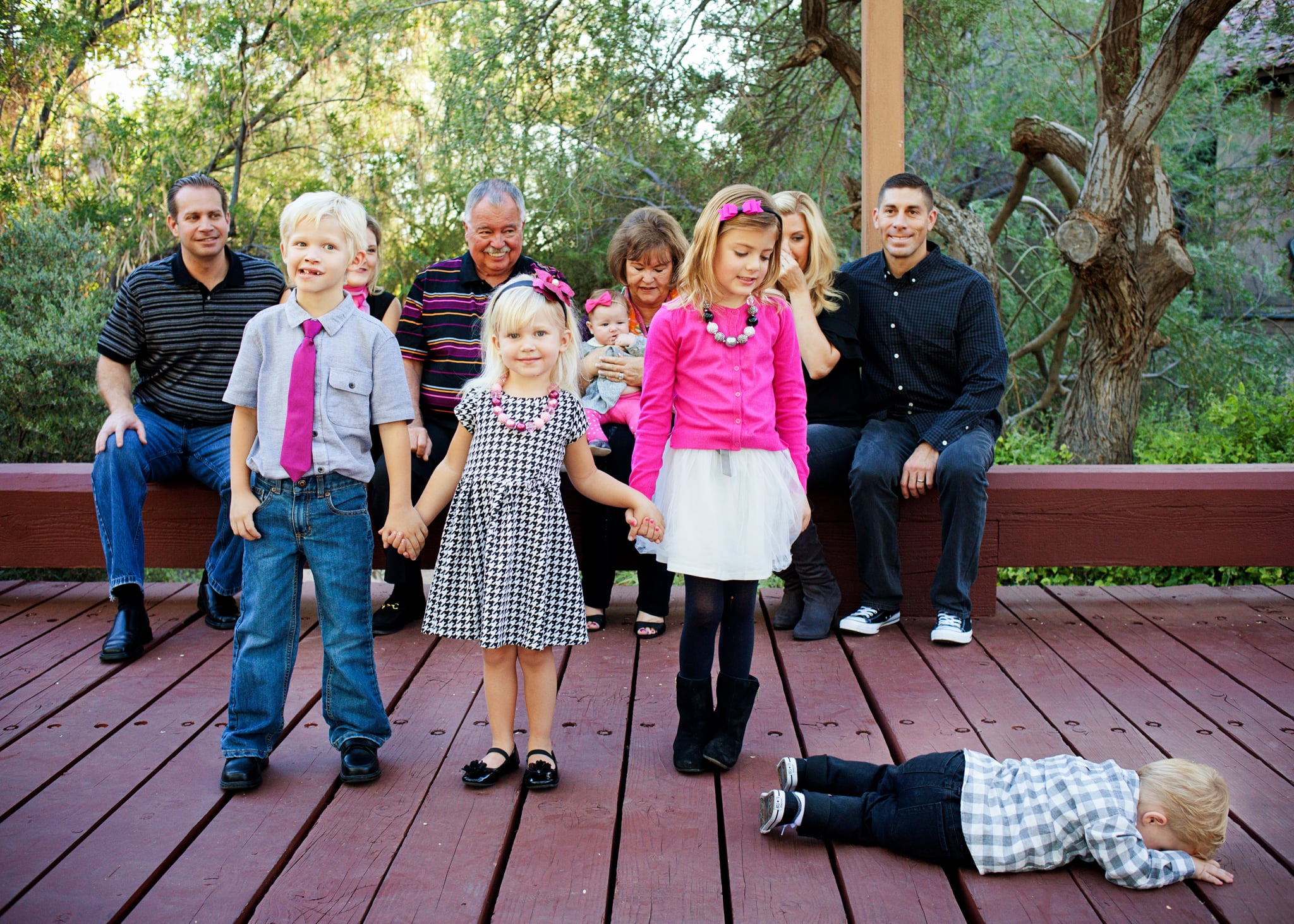 Brendan wouldn't give up on his efforts to make these the worst Christmas photos ever. He threw himself on the ground in protest — and buried his head on the floor. I did notice that somehow, his other shoe was back on. Cameron spit up again, this time on my mom. My husband shouted triumphantly that Notre Dame had just scored a touchdown.

The photographer was laughing hysterically at all of this. "These are going to be the best photos — ones you will cherish forever," she said.

I cursed her in my head and wondered how much extra she would charge to photoshop our heads onto another family's bodies.

We left after what seemed like three hours (it had been exactly 42 minutes since we arrived), looking like a scene out of a horror film. Peyton had scratched holes in her tights. Cameron was covered in spit-up, and her bow had slipped from her head to around her eyes. Brendan resembled Pig Pen from Peanuts and had a giant snot ball dripping out of his nose. I was exhausted, smelled like vomit, and had makeup melting off of my face. My husband was also dirty from chasing after Brendan, dripping sweat, and foaming at the mouth because the game was tied.

Two weeks later, the pictures were delivered to my inbox with a message from the photographer.

"You all have SO much to be thankful for. Look at your beautiful family. I hope you can look back at this one day and laugh about how full your lives are."

And I cried, because our family is perfectly imperfect. We have temper tantrums and pulled hair and untied shoes and spit-up on our clothes. But this is who we are, and I wouldn't change one thing about it.

Relationships
I Lived With My Ex After We Broke Up, and It's One of My Biggest Regrets
by Lexi Inks 20 hours ago