Use this as your guide for today and ALWAYS! #walkupnotout pic.twitter.com/GdKcwV9Mt7

On March 14, thousands of students across the US walked out of their classrooms at 10 a.m. local time to peacefully protest against gun violence for 17 minutes — one minute for each victim of the shooting at Marjory Stoneman Douglas High School on Feb. 14. In Jodie Katsetos's sixth grade classes, however, students were encouraged to "walk UP, not out." 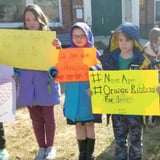 2 Fifth Graders Organized an Elementary School's Walkout, and What They Did Will Give You Chills

The photo has been shared nearly a million times since it was posted on the night of March 13, with its supporters boasting that this type of positivity is what schools really need to help end gun violence.

Though the intentions of the walkout are certainly positive, the intended message may not be received as well as we may hope. If we want developmental change, perhaps we should #walkupnotout. Believe in the immense power of love and kindness!
(Thanks for this, @kelly_fenn16!) pic.twitter.com/r7sU4zHgEU

But that mentality is so, so flawed.

The nonviolent walkout gave students too young to vote the chance to make a political statement by literally and metaphorically raising their voices to rally for stricter gun laws in order to end the systemic gun violence that has taken the lives of thousands of kids just like them. By motivating them against the walkout and instead asking them to simply be kinder to their fellow students, Katsetos encouraged her students to forfeit an opportunity to show the federal government that, like the shooting survivors in Parkland, they're going to fight for change even though they're too young to hit the polls.

Although we should all actively encourage our children to abide by the "golden rule," this movement insinuates that school shootings are the victims' faults for not being nicer.

What's more, this teacher just put on all of her students that if they could just be a bit nicer and more inclusive, those actions alone could help to end gun violence. But being kind doesn't make the gun laws change themselves, it doesn't make the guns circulating around the nation disappear, and it doesn't cure another child's potential mental illness. Although being kind should be a given, and we should all actively encourage our children to abide by the "golden rule," Katsetos's movement insinuates that school shootings are the victims' faults for not being nicer to a student with potential mental health issues who may make them feel uncomfortable or could already be violent in similar ways Nikolas Cruz was reported to be.

All Katsetos is accomplishing with this movement is, like Trump, avoiding the true issue at hand by deflecting and turning people's attention to something else — and she's gotten nearly a million people to buy into it. The question on Katsetos's whiteboard, "What can YOU do?" shouldn't be aimed at her innocent students, asking them to fix huge problems that are nowhere near a result of anything they've done, but at the federal government.

Related:
4 Things to Do When Talking to Your Kids About Gun Violence, and 1 Thing You Shouldn't

Response to #walkupnotout To imply that students and teachers aren’t kind enough already is infuriating. KINDNESS DOES NOT CURE MENTAL ILLNESS. Stop blaming the victim by stating we are not doing enough. #Enough

And this #walkupnotout trend going on is inaccurate. Because

A.) you should be nice in general
B.) it’s not going to stop us from being murdered in schools

1. Not every shooting is because a student has beef with his classmates. That guy at Sandy Hook was 20 years old and shot at kids in elementary school he absolutely didn’t know.

the #WalkUpNotOut thing is good-intentioned, but completely misses the point of what the school walk-outs are for—protesting government inaction to gun violence

honestly this #walkupnotout "movement" is just a BS excuse for NASCAR America to not participate in a legitimate movement and to shift the blame (once again) to something besides guns, in this case it gets shifted to the victims and anyone who disagrees is "part of the problem"

I am absolutely all for being kind to people and I'm a firm believer in the Golden Rule™️ but #WalkUpNotOut is not going to end gun violence. You're expected to be nice to people. What shouldn't be expected is a child coming into a school with an automatic weapon.