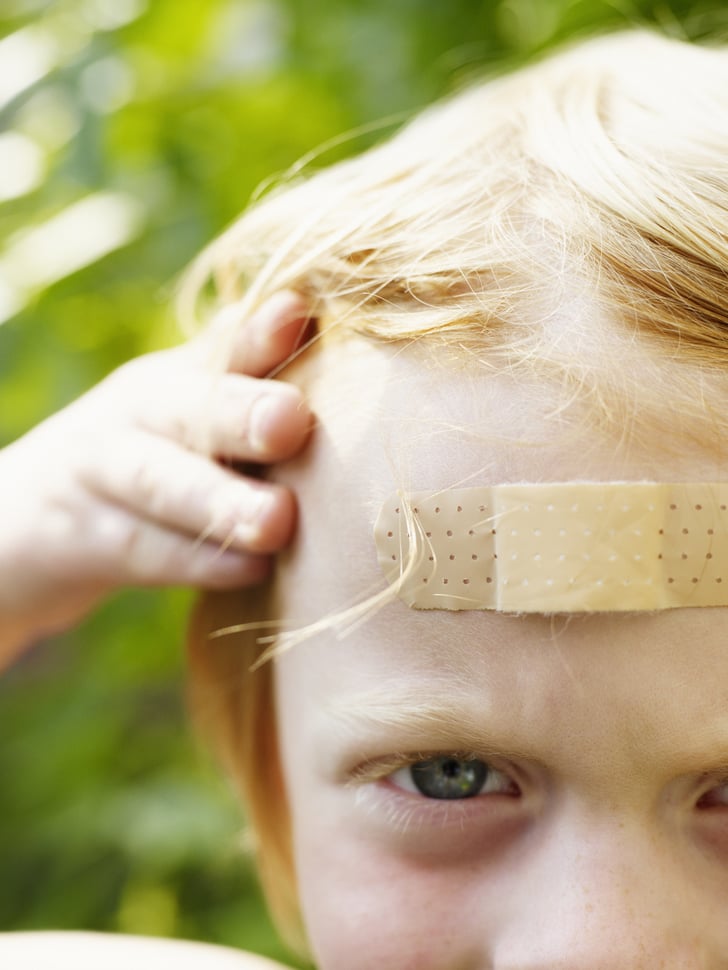 If you're a parent, you've probably done it. You've caused your child's accidental injury. Accidentally plowed into the kid who just moved underfoot. Walked into a doorway with your infant's head in the lead. You've fallen with a kid. Dropped a kid. Hip-checked a kid. Let them roll off the bed when you thought that couldn't happen. Thought you were playing a fun wrestling game until you realize they're crying. Pinched their thigh while trying to buckle them into a carseat. Bumped their head on the car while trying to get them out of the car seat.

I must be clumsier than the average parent, but nearly all of these things have happened to me while caring for children. One night while my daughter, age 1, was up teething, my husband put her back into her crib in the dark and she cried out. We thought she was crying for us. But in fact it was pain — when we woke up in the morning she had a giant black eye, because she'd fallen against the rail of the crib as he was putting her back in. It was a horrible feeling, though her injury was not serious, and she didn't hold it against us.

If you accidentally hurt your child, you will feel: intense shame, even panic.

Then, close on the heels of shame, you will probably feel a rush of adrenaline. While trying to assess the level of injury you gave your child, your body's fight or flight mechanism tries to tell you are a terrible parent and should give up now. Or maybe it thinks somebody else hurt your kid and you need to defend. In any case, this is disorienting. Use deep breathing to calm your own panic while trying to comfort your child. Don't quit just yet.

As your head clears, you'll feel guilt and confusion. How did this happen? I was just walking/reaching for the diaper/turning around. If you thought your nonmobile child was playing with toys and suddenly they were climbing up stairs, you'll feel very confused. The guilt is immense, especially if you deem it something that could have been prevented. But the problem with accidents and kids is that they are generally preventable — but only if you live in a perfect world. Instead, you live in a world of humans.

After guilt, there's acceptance. It is very hard to see your own child in pain and even harder to know or feel that it is your fault. If only I had been standing closer, etc. You will replay the event in your head many times and pretend different things happened. But all the while you are slowly accepting what did in fact happen and that you cannot change the outcome now.

If your child is not badly hurt, which in most cases, they're not, you can find closure and comfort in realizing that while accidents happen, most of them are not serious and your infant or child is not quite as fragile as you think. If your child has to visit the doctor or ER, or has a visible cut or bruise, your guilt will linger. You find yourself telling everyone possible exactly what happened and how, well, it was an accident. Once you realize most people understand that this happens to the best of parents, you can start to forgive yourself. Claim your own guilt. Don't let others shame you about being a better parent. You've already suffered. Your child is OK or on the mend. You don't need anyone telling you how to avoid future accidents, as that's all you've been thinking of since it happened.

You may even gain both liberation and confidence recovering from such an accident. My friend's child broke his femur when the father slipped on ice with him. Her toddler was in a hip cast for seven weeks in Winter. She said she had to get creative and ignore people's judgment about what sort of pants a casted toddler requires in freezing temperatures. She also said it gave her a lot of confidence, as a parent, to see that there were upsides to his temporary immobility. Her child's communication skills grew in that period, because he was limited physically. She said you adapt, and that giving yourself that authority, making the decisions as a parent, feels really good. Instead of lingering over the pain of what happened to their child, she and her husband used the event as a way to grow.

If you've weathered accidents with your child, you've may have suffered the reverse — when your child unintentionally hurts you. The physical intimacy and proximity of caring for children means that your bodies seem to develop shared gravity — you are so close to your child that this gravity can work against you.Twice in one week I thought my 2-year-old gave me a black eye. Once, she whipped a board book up over her head as I held her in my lap, and the corner of the book crashed into my eye socket. Then I bent down over her crib to hug her just as she bounced up off the mattress, sending her head into my cheekbone. OW. In both cases I just pretended it didn't hurt. But there are times when I instinctively react to the pain by saying, "Hey, you just scratched/hit/hurt me!" I try not to overreact, but I do try to communicate what is too rough, if the physicality seems intentional or explorative. In most cases, it's just proximity and timing.

If nothing else, being injured by your own child may remind you of your own strengths. When my friend's infant poked her in the eye, scratching her cornea, she knew something was wrong, but it took her a day to find an ophthalmologist. The doctor was shocked she'd made it a day without treatment. Most people can't stand this kind of pain, he told her. But mothers aren't most people.

Small Space Living
Living Alone During the Pandemic Taught Me About My Strength, My Priorities, and Myself
by Camila Barbeito 3 days ago