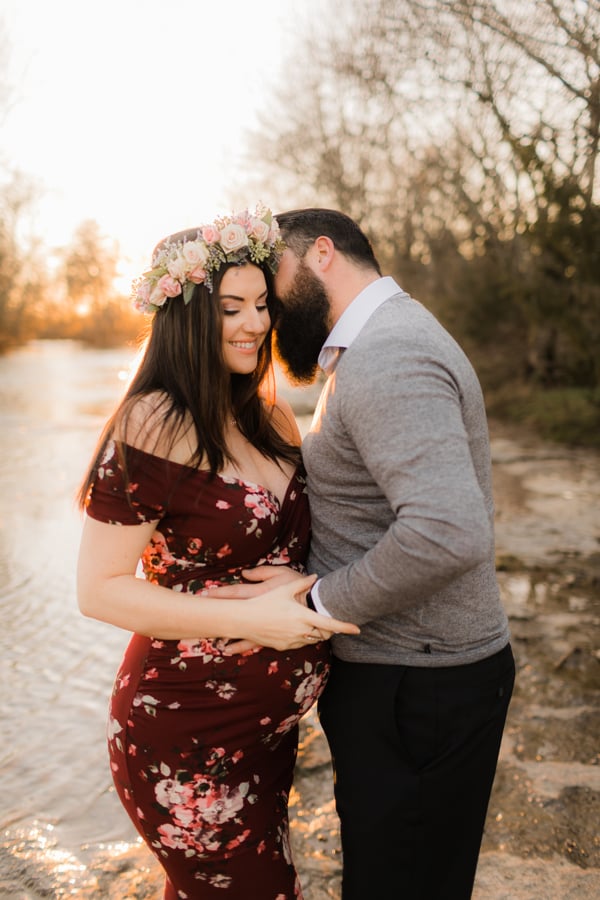 The first time someone inquired about my future family plans, I was a deliriously happy bride-to-be, immersed in the final weeks of wedding planning. "Do you guys think you'll be sharing baby news anytime soon?" an older colleague asked with a wink. "Oh, I think we plan to have lots of fun with each other for a while," I answered playfully, while scrolling through honeymoon inspiration on my phone. I had no idea at the time how wildly defeating that vein of questioning would eventually become.

It would be more than a year after our wedding day before my husband and I would decide to begin our journey to parenthood. But time would then start writing its own story — one we weren't prepared to live out. After dozens of disappointing pregnancy tests, and some badly needed breaks in between, it was four years until my eyes were met with a second line on the test. Those years would be filled with romantic cabin getaways, dreamy sunset beach walks, late-night cooking ventures with bottles of wine, and Saturday mornings spent laughing ourselves off of the bed. But there were also crushing moments of shame that I unpacked in secret.

"You've been married almost five years and you don't have any kids?" What she didn't know was that her interrogation came hours after I'd had a sobbing breakdown.

"Wait a minute. You've been married almost five years and you don't have any kids?" a friend of a friend asked me at a bachelorette party once, leaning into me, invading my space, her eyes widening as though she were examining a person with 2,000 heads. How unfathomable of me, right? What she didn't know was that her interrogation came hours after I'd had a sobbing breakdown in my bathroom at home after another negative pregnancy test. It had taken me 30 minutes and some serious MacGyvering to cover up the evidence with concealer.

While, in retrospect, I am certain she intended me no harm and would never have made such a comment had she known the dark waters I was wading through, all I could think at the time was that I wished she would mind her own womb instead of mine.

Related:
As Infertility Rates Rise, Money Will Decide Who Gets to Be a Parent in America

When the spell of infertility finally, unexpectedly broke itself, my husband and I were ecstatic to announce that I was pregnant. The congratulations poured out in droves — by way of phone calls, text messages, and social media. We were blown away by all who were buzzing with love and celebration for us. Interestingly, though, some of the well wishes were followed by pressing questions ranging from "Any luck you're having twins?" to "Are you guys planning on having more than one kid?" A month later, when we announced I was carrying a girl, the congratulations flowed yet again, but a few chimed in, saying, "Oh my God, you have to try for a boy next!"

Initially, none of those questions or comments bothered me at all. I'd tell them we were giddy in our state of impending parenthood, yet undecided about having another. But when my first trimester was plagued with flu-like cold chills, smell aversions, and nausea so severe that one morning I doubled over onto the grass in our front lawn after breakfast, gagging violently and crying out for mercy, I began to entertain the thought of stopping after one child. My answer shifted from "We aren't sure yet" to "We're starting to think this could be our 'one and done.'" I was surprised by those who seemed allergic to my answer. Although the majority of inquiring minds were lovely and supportive, some gazed at us in bafflement — as though unable to comprehend how we could possibly be satisfied with only one beautiful, healthy baby.

"No, you can't do that to your child. I can't imagine not having any siblings," one person said.

"You can't have just one! Every kid needs a companion," said another.

Related:
Don't Make Me Feel Bad For Having an Only Child

It struck me as strange. I was being exposed to a paradigm that was foreign to me — one where there exists an ironclad mentality that a family must look a specific way. I wondered, can't it be true that one child is enough for some? Why should the experience of having only one child be discounted — especially when there are women who are pricked with hundreds of needles and dole out their last dollar in an effort to love and raise one viable human?

A loving family is a loving family. It's no one's business to determine the ideal parenting path for another person.

I have difficulty understanding the multitude of stigmas in regard to family dynamics in general — from the number of children one has, to how and when said children are conceived. Whether had at 25 or 35, and whether conceived naturally, via surrogate or IVF, or secured by means of adoption or fostering, with a partner or solo — a loving family is a loving family. It's no one's business to determine the ideal parenting path for another person. There are a multitude of nuances involved with family planning — from finances to lifestyle preferences to career commitments. It's always those divvying out comments like "You can't have an only child" or "You need to hurry up; you're running out of time!" who have no plans of funding said children, and who have never curled into the dark corners of struggling to conceive said children.

I've noticed, too, that the defying of boundaries in regard to parenthood doesn't stop after having the children. There is pressure and shame about breastfeeding versus not breastfeeding, and about vaccinating versus not vaccinating, and so many more subjects. All are such personal decisions involving many implications — oftentimes beyond one's control. I think we shouldn't be so adept at imposing our personal ideals and values onto others. Who sent out the memo that someone else's family plan is another person's right to persuade or dictate? Almost 100 percent of the time, we are missing a world of pertinent information.

Related:
The 1 Question I Didn't Realize Was So Annoying — Until I Got Pregnant

Today, I stand in the final act of my pregnancy. In a matter of hours or days, this curtain will close and I will step into motherhood. The truth is, after departing the turbulence of my first trimester, the subsequent chapters have been heavenly. Still, despite having surrendered myself fully to every magical moment of feeling like a divine portal between the supernatural and the natural, I'm not convinced I wish to do it again. While we are ecstatic about our upcoming roles as daddy and mommy, my husband and I share dreams that may or may not be conducive to raising multiple children. We can't be sure. There are dreams of books to write, travels to be shared, personal growth to be cultivated, and adventures to embark upon. Some of these dreams have to do with only us as a couple, and some are for our daughter's well-being alone. All dreams are ones we don't need to explain to anyone but ourselves.

If my daughter is the only child we ever have, whether by our own decision or one nature makes for us, she will always be enough. I could never discount the awe and enormity of growing and sustaining her precious life for nine months. Even if I am never a magical portal again, I will not be any less of a mother to her than a woman who births and raises two, three, or 10 children. And I certainly won't make the decision about whether or not to give her a sibling based upon another person's ideal of what a complete family looks like.

Once our baby is born, and my husband and I cross over into the realm of parenthood, it is likely that we will see life through an entirely fresh lens. We may find ourselves desiring to expand our family further — or we may not. Regardless, the beautiful news is that we are allowed to change our minds, multiple times over if we wish, but no one else will ever be doing it for us.