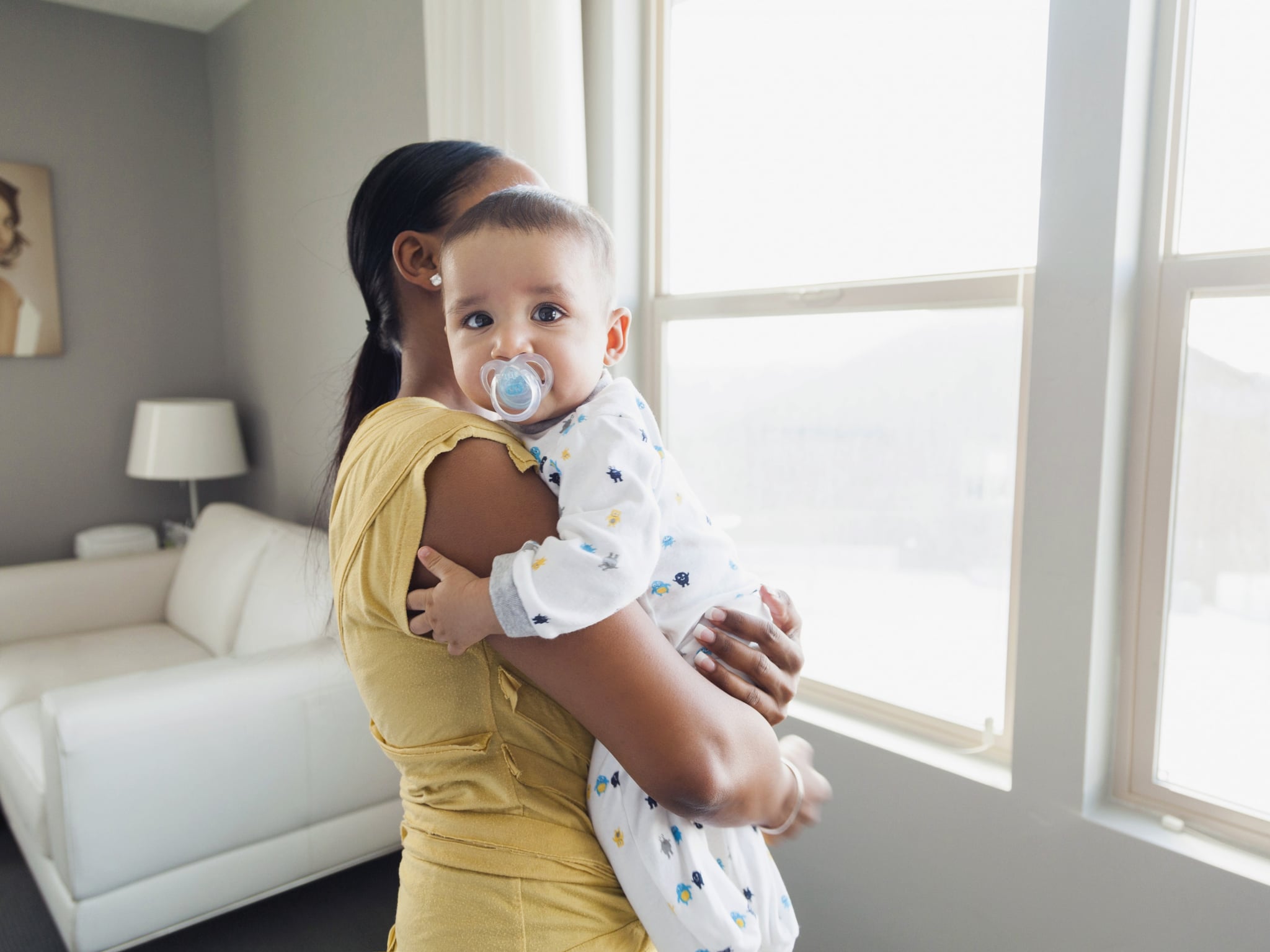 The number of sleep aids my husband and I bought when our first was born will tell you — despite Bradley classes and reading books and being the third of my siblings to have a child — how desperate we were for advice and predictable sleep. Our baby's ability to fuss and/or not sleep was something we were not prepared for. We adapted. We had a Baby Bjorn, and we perfected dancing and rocking and bouncing with a swaddled child. But that energy lasted only so long.

Things we bought in her first month of life: a crib wedge to prop her up for possible reflux and a $100 baby swing, which worked for about a week. We bought pacifiers and a warming pad; we bought a little sheep that made heartbeat noises, a white noise machine, swaddlers, and a ball to bounce her on. The noise machine was actually a vacuum track on an iPod, about 80 minutes long. Sometimes the track would end, and in the few seconds of silence before it began its repeat, she would wake up. We bought the Miracle Blanket. Really, what did we not buy? We put our own dirty t-shirts in her crib. We gave her gas drops. We burped her when nursing. We did the best we could, and then, when she was old enough to sleep train, the books demanded we get rid of the cheap tricks, such as the pacifier. Impossible.

Some of the things we purchased were the result of advice — everyone else who had done it wanted to tell us what worked for them. Have you tried this? They'd say. None of them worked, of course, though we needed those pacifiers. But it was a quick lesson in the things people, the Internet, and books tell you about your supposed child and their magical ability to learn how to sleep, eat, or nurse, or what have you. Sharing. Potty training. Biting. Making friends. Toddler discipline. Now that I have children, I think I understand the clichés and the advice wringer a little better. But I often wonder, why is so much parenting advice so bad? Is it ill-timed, too general, or a trap for vulnerable parents? Here are a few things that smack on truth but often, in the sometimes chaos of figuring out your kid, will lead you astray.

Sure. My husband and I learned the hard way never to empty the dishwasher in our apartment while baby slept. We whispered after dinnertime. But then, say, you let them nap for 20 min in the car after 3 p.m. and that 7 o'clock bedtime is more like . . . 10 p.m. So screwed. If my children happen to take late, too-long naps, I wake them.

It sure is. Except when they don't need the calories and could be sleeping, and a pacifier, a soothing Dad, or a few minutes of crying is a whole lot better.

Potty Train During a Three-Day Weekend

We all want to believe this one, but it is so, so not true. Just because your kid is wearing underwear and uses the potty three days in a row does not mean they've got the hang of it.

Sleep When the Baby Sleeps

This is a killer for new moms. If you're home alone, which many new moms are, you are the person doing the laundry, preparing food, and cleaning. While I have vacuumed with a baby strapped to me, most of these things get done while baby sleeps. Maybe you'd like to take a shower. Not only are naps hard to practice, but you also get to feel like a failure for somehow not getting enough sleep. If only you would take people's advice!

Talk It Out — AKA Reason With Your Toddler

This one could work, as long as you understand that your young child is not actually a reasonable person. Sometimes giving them endless choices or deflecting their misbehavior is a poor substitute for consistent discipline, such as a time-out or NO.

Give It Time — AKA They'll Grow Out of It

Unless they don't, and by not confronting the problem behavior, you now have a kid whose behavior remains disruptive and is no longer age appropriate.

Don't Do Time-Outs in the Crib

Actually, when your toddler is having a tantrum, sometimes this is the only safe place, and it's calming, too.

That Tooth Will Fall Out on Its Own

This all depends on how much tolerance you have for rotting teeth.

This basically consigns moms to choosing chores over fun. The nature of play is really group work, especially until a child is 4 or 5. There are other ways to teach independence. Don't miss out on enjoying your kids.

What are your advice fails?

Family Life
It's So Ridiculously Easy to Make Your Own Bubble Wands — Here's How!
by Hedy Phillips 14 hours ago

Family Life
After Becoming a Special Needs Parent, I Needed to Relearn How to Fit In With My Friends
by Jaclyn Greenberg 3 days ago

Parenting
We're Not Ready to Get Too Close to Friends and Family Yet, and It's Causing Tension
by Jennifer Torkelson 5 days ago