Dancing With the Stars went Disney on Oct. 14, and Queer Eye's Karamo Brown took the opportunity to dedicate his samba with partner Jenna Johnson — to "I Just Can't Wait to Be King" from 2019's The Lion King — to his two sons, Chris and Jason.

"The Lion King is one of my favorite movies. It makes me think of my sons," Karamo told Jenna in the behind-the-scenes footage that was shown before his samba performance. "I became a dad in 2007. There was a stack of papers on my doorstep for back child support and I realized I had fathered a child when I was 15 years old with my last and only girlfriend."

He continued: "So I got custody of my kids with the support of their mother when my son [Jason] was 10 years old and I adopted his little brother [Chris] when he was 8. Overnight I became a father of two. I've raised my kids as a single father for many years, and recently I've included my fiancé, Ian [Jordan], into their lives. They call him Pops, and I'm Dad."

Both Jason and Chris appear in the behind-the-scenes clip, Karamo introducing them to Jenna while wearing a Simba headband. "I got you all stuff as well, because you're both my little Simbas," he tells them. Chris told the cameras, "Having Karamo as a dad is really amazing," while Jason added, "He's so supportive, he's loving, he's one of the best people to have in your corner." 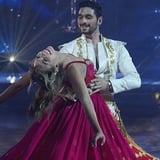 In the clip, Karamo shares why The Lion King in particular is such a special movie for him as a dad. "As a father, watching The Lion King, you start to think about what your kids could be going through and the pressures they're under. And you just want them to feel good and know that they can be king one day. To have kids, to see them grow, to help guide them, is just probably my greatest joy in the world. I didn't always have the best relationship with my father and so I always wanted to be a great father for my sons . . . My sons are my world, and so I'm dedicating this song to let them know that they're great — I love you, and you'll be king one day soon."

Eve
"We Finally Get to Tell Everyone!!!" — Rapper Eve Is Pregnant With Her First Child
by Chanel Vargas 5 days ago