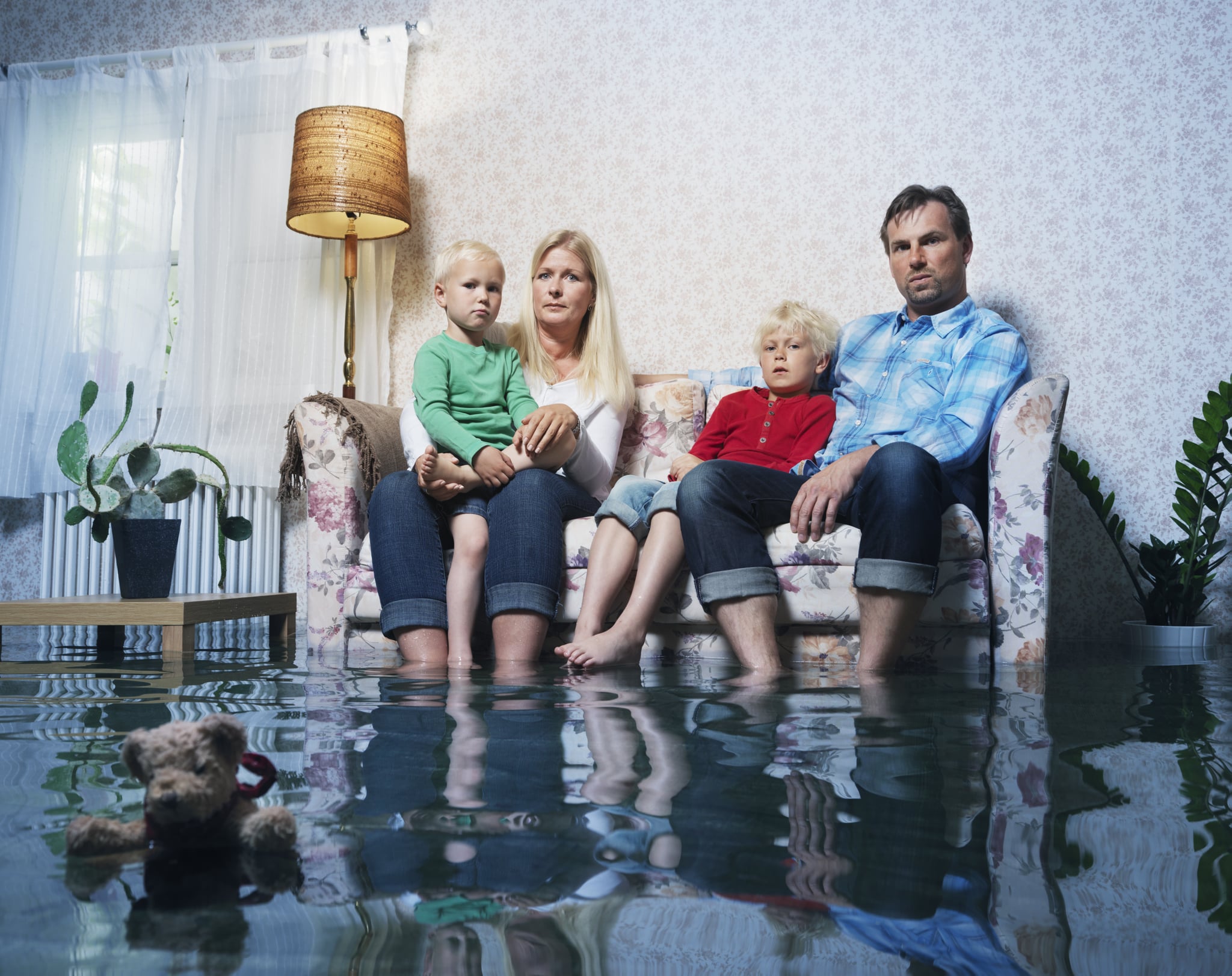 Within the past few months, our globe has seen record-setting heat waves, droughts, wildfires, and hurricanes that have caused unprecedented flooding and power outages. Natural disasters are becoming more commonplace, and according to a new study, four in five Americans live in areas that has experienced at least one in the past three years. And more than half live in areas that have experienced severe encounters. Although findings from the Potential Energy Coalition show that 60 percent of Americans are concerned about climate change, only 14 percent talk about it. Even fewer actively do anything about it.

"It's overwhelming to think about," Soraya Sutherlin — a certified emergency manager with more than 13 years of experience helping families, cities, and states better prepare for emergencies — told POPSUGAR. "And you don't want to think about it either, right? You're not the most popular person at the dinner table when you're bringing this stuff up. Plus, it's hard to prepare for things that we don't feel we have the resources to adequately address, so we put it off."

She said parents, especially, avoid preparing for disaster because — while it is hitting the news cycle with more frequency than ever before — it's still low on their list of imminent things to worry about, especially now when many are dealing with COVID-related childcare issues on top of the day-to-day grind of keeping babies fed and napped.

"Parents are actually a lot more prepared than we think we are. As parents, we're constantly anticipating the needs of our children — of what can possibly go wrong. Small disasters happen all the time."

"But parents are actually a lot more prepared than we think we are," Sutherlin, a mom of three, said. "As parents, we're constantly anticipating the needs of our children — of what can possibly go wrong. Small disasters happen all the time. What if they have an accident or spill something on their shirt. You're going to need diapers and wipes, and so you're already preparing for all the things that could happen. So, if you're in that mindset, you're already halfway there. Try not to think of a natural disaster as this gigantic elephant in the room that you have to tackle all at one time."

She often tells families who feel overwhelmed to not overcomplicate the concept of emergency preparedness: "Simplify it. Look at your basic family and what your needs are. If you approach it in a way that's digestible, parents can actually end up feeling empowered."

The one thing she wants parents to avoid at all costs is putting their heads in the sand. "You might not reside in a region directly affected by earthquakes or tornados, but every 24 seconds, there's a house fire in America," she said of the No. 1 most common disaster, followed by flooding. "We're all vulnerable to both of those no matter where we live. Those disasters can happen, and for many more of us, they will. You can't control them. But what you can do is mitigate the disastrous consequences they will have on your family by being prepared."

Sutherlin — who, in partnership with leading preparedness brand Judy, wrote the recently released A Kids Book About Safety — outlined for POPSUGAR the three high-level steps parents can follow now to feel less hopeless and more empowered. What's more, each one takes fewer than 30 minutes.

Related:
The 2 Things Parents Can Do Now to Prepare Their Kids For If They Ever Get Lost

1. Know Just the Top 3 Risks in Your Area

It's OK if you don't actually know what the top potential disasters are in your area — it's really easy to find out.

"We have more control over our fates than we realize."

The Federal Emergency Management Agency (FEMA) has a national risk index, which is an interactive map that provides an at-a-glance overview of your local risk for up to 18 natural hazards based on annual losses, social vulnerability, and community resilience. Sutherlin recommends pinpointing the top three and then researching how to respond in each.

By having this baseline knowledge or just a few targeted scenarios, "disasters then become predictable," she said. "We have more control over our fates than we realize."

She also recommends downloading the FEMA app and signing up for local alerts, by zip code. That way, you can get notifications for everything as universal as thunderstorms and extreme temperatures to site-specific events like avalanches or volcanic eruptions.

2. Get an Emergency Kit — But Then Supplement It Having an emergency kit is key, but most people only go so far as purchasing a premade one.

"We look at emergency kits and we're like, 'Oh yeah, I've got all the big stuff. I've got the bandages, and I've got all of the things I might need for a major emergency,' but the basic things that we need for our kids aren't there," Sutherlin said, advising parents physically add other family-specific essentials to their kits. Children's Advil, breakfast bars you know they'll eat without fuss, and pet food qualify. She even suggested supplementing kits with calming items, like a coloring book and markers. "When thinking about emergencies, we don't always have to think about that big, life or death extreme. Disasters can take emotional tolls on humans, so it's not just the physical aspect to prepare for. At the end of the day, what do you need as a parent to get through this? Is it a bottle of wine that you need to be putting in your emergency kit?"

Another tip for parents of little ones: consider storing a baby carrier near your kit, even if you don't ordinarily use it.

"How many kids do you have and can you physically carry them?" Sutherlin asked. "Baby carriers are a great option because they're weighted for up to 65 pounds. I kept one for years well after I stopped wearing my babies because if I ever had to evacuate, I'd want to be as hands-free as possible, and this way, I could put one on my back, carry the other, and hold the oldest one's hand."

3. Have a (Rough) Plan That You've (Actually) Practiced

This is the step most people skip. It's too overwhelming, or it requires more time and attention than they have at the moment, so they put it off. Something Sutherlin wants parents to remember is that having "a plan" is less about the plan itself than the process of developing it.

"Fear will always trump every other emotion in an actual disaster, so being able to think through them before they ever happen, in a nonscary way, is essential," she said. "When adults — and even children — are a part of the process, you give them the ability to face the situation without fear, which gives them better odds of surviving the crisis without harm."

"Fear will always trump every other emotion in an actual disaster, so being able to think through them before they ever happen, in a nonscary way, is essential."

"If it's a wildfire, if it's a house fire, if it's an earthquake, what am I going to do first?" Sutherlin said, using her own situation as an example. "Am I OK? I'd check to make sure I'm OK, and then what am I going to do? I'm going to check on my kids, especially the younger kids, like 2 to 3 years old. I can teach them to stay where they are. Since I'm in California, I'm teaching my kids, 'Hey, listen, if there's an earthquake, you stay in bed. If it's the middle of the night, Mommy will come to you. I will come to you. You stay where you are. Do not try and come to Mommy.'"

The 2-Minute Timer
She also advises setting a timer to practice a sudden evacuation.

"Set a two-minute timer," she said. "If you had to get out of your house in two minutes, what would you grab? How quickly could you do it? Where would you go, how would you get out?"

The first time she timed herself, she got outside and didn't have shoes. She also forgot to grab her car keys. Only after that trial run did she and her partner walk through their house and identify how to make it more successful. "It's never going to be a perfect science, but by talking it out, we had a better idea of what we'd do, so we don't have to think about it from square one in the middle of the night with alarms blaring."

The 0-5-30 Rule
In addition to the two-minute timer, Sutherlin follows the 0-5-30 rule, which essentially means having a general idea for what you'd do if you had no time, five minutes, or 30 minutes, which may be the case if you've just gotten an alert about a tornado watch, for instance.

"If you have no time, you just get out," she said. "But if you have 30 minutes, it's helpful to come up with a shortlist of what you are going to start gathering. Go through your typical day and think about what you absolutely need to survive a week outside your home. 'OK, I use this, this, and this.' And also, consider what cannot be replaced."

She noted the five Ps — people and pets, prescriptions, papers, plastics, and priceless items — as a solid starting place. Plastics refers to credit cards and cash, and priceless items are photos or mementos that aren't digitized or a computer that has all of that stored on its hard drive. For papers, that means important documents that would be a pain to replace, like birth certificates or passports.

"What are the things that you'd need to have to reestablish your identity and your residency?" she said.

"Disasters can happen, and for many more of us, they will. But what you can do is mitigate the disastrous consequences they will have on your family by being prepared."

It will certainly be a time-intensive project, but Sutherlin recommends organizing those items as best you can now. "Get those things ready ahead of time," she said. Keep some extra cash and copies of important documents in your emergency kit, for example, or print off a checklist with locations of items to reference in the event of such an emergency.

Because in a true emergency, you won't ever be able to grab everything, Sutherlin also suggests proactively taking a video inventory of your home for insurance purposes. "Walking through your house with your phone," she said, so it can serve as a guide when it comes time to recall what all you owned and what the value of it was.

"If all of this feels intense, remember, it's about the process," Sutherlin said. "The process of knowing your risks, of purchasing a kit, of developing a plan. Because you're now empowering yourself to realize you have the tools to face different types of situations without fear."