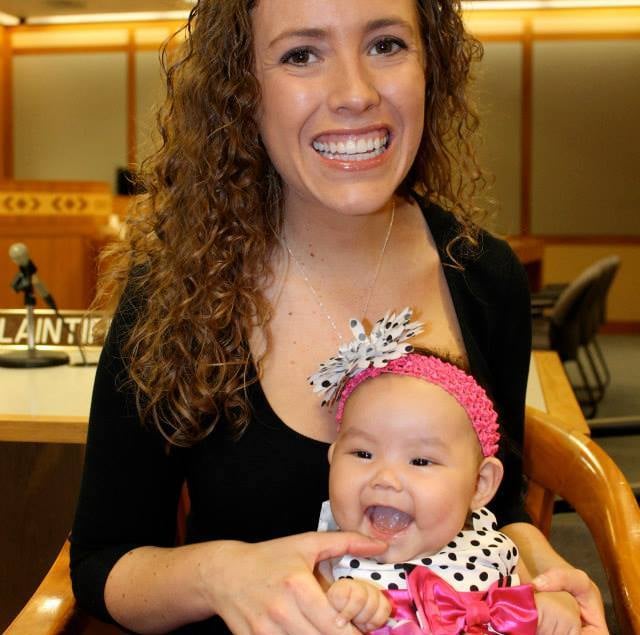 At 6 years old, my daughter still likes to crawl into my lap and be held like a baby. "Just one more time," she says, looking up at me with puppy-dog eyes. "Tell me about my adoption day just one more time."

It's one of her favorite stories, the day we became a forever family. The sentimental part of me likes to believe she enjoys hearing it because it's such an important part of our family history. But the truth is, she mostly likes hearing about how, at 3 months old, she pooped through her diaper and all over her fancy adoption-day dress midproceedings, causing everyone in the courtroom that day to burst into laughter as she was passed back to aunties for a cleaning. The judge lightheartedly refused to shake any of our hands after that.

It's still one of my favorite memories and one of the best days of my life. A day my daughter and I celebrate every year with big adventures and dedicated mommy-daughter time. Her adoption day is treated with bigger fanfare in our house than even her birthday or Christmas.

My daughter and I have an incredibly close bond. We have since the moment she was born. It's always been pretty effortless and natural. A bond I simply can't imagine would have been any stronger if she had been borne from me instead of her other mama.

Related:
My Mom Died When I Was 6; Now My Stepmom Is Showing Me How to Love My Daughter

Don't get me wrong, if I could somehow manipulate time and space and alter that history to save both her and her other mama the pain involved in that separation, I would. If I could make it so I was the one to protect her from conception, the one incurring the stretch marks and labor pains, I would take that on in an instant.

Still, it's a bond you probably couldn't have told me I would one day have when I was first diagnosed with infertility. Back then, I was 26 years old and single. I'd developed complications after donating my eggs to two different infertile couples. So not only was I being told I had likely lost my ability to ever carry a child of my own, but I also had to live with the fact that losing my fertility had been the cost of helping others achieve their dreams of parenthood. It was a bitter pill to swallow at a time in my life when I felt like I was losing the one thing I wanted most from my future: the chance to be a mother.

It took me years to heal from that loss. And at first, I was indignant at the suggestion that I should one day adopt, as if that would be the salve for all my tears. It seemed so utterly dismissive of what I was going through; such an oversimplified solution offered by people who, in most cases, had conceived on their own just fine and never considered the option of adoption for themselves. I grew so angry at this suggestion that for a while there, I claimed I would never adopt, so content was I to live in my misery instead.

But as I healed, and as the years passed from my initial diagnosis, my heart eventually began to change. And about six months prior to my 30th birthday, I decided to pursue my foster care license, with the goal of fostering, and eventually adopting, older girls in the system. My daughter, adopting an infant — that was never the plan. And yet, she turned out to be the best surprise I was ever given.

I knew there were countless people in this world hoping to adopt a healthy newborn. As a single woman, I assumed I'd never be able to compete in that playing field. And I didn't even really want to. I'd grown up lost and confused myself and come to realize I had something to offer older girls who may be struggling with some of the same feelings of being tossed aside that I'd dealt with in my youth.

But then, I met my daughter's other mother by chance just a week before finishing my foster certification. She was a young mother with three kids at home and a deceased husband, pregnant with a baby she was convinced she couldn't care for. We were introduced through a mutual friend who thought I might be able to help her with connections to figure out her options. And that was my plan entirely. I even tried to help her find ways to keep this baby she was carrying.

But once she was in my arms, I suddenly knew: all the pain and tears of infertility had led me to this.

But just a few minutes into our first conversation, she asked if I would take that baby instead. I scoffed at first. "I'm sure we can find a couple who will take her, if that's what you really want," I said. But she remained firm, asking again a few hours later and meeting me for lunch the very next day. A week after our initial introduction, when I should have been attending my final foster care class, I was in the delivery room instead as our daughter was being born.

It was an outcome I had never planned for. One I had never even hoped to imagine might one day come true. But once she was in my arms, I suddenly knew: all the pain and tears of infertility had led me to this. And I wouldn't have wanted it any other way.

Related:
Our Fertility Journey Has Put Me Through So Much Pain, but I've Learned a Lot

"I don't know if you believe in God," my daughter's other mother said to me during one of our first conversations. "But He's telling me it's supposed to be you. You are supposed to be my daughter's mother." I was speechless at the time, unsure how to even respond. But all these years later, I can't help but think she may have been on to something.

I didn't understand at the time. Infertility felt like the worst thing to ever happen to me, one more heartache in a lifetime of hard events and losses. I couldn't figure out why this was being taken away from me too, when all I'd ever wanted was to be a mom.

But now I get it. It was because I was supposed to be her mom. The little girl who has become the love of my life was always meant for my arms. It's an outcome I don't think I ever would have considered or pursued if not for losing my own fertility first.

Which is why I now recognize infertility as being one of the best things to ever happen to me. Because it led me to her, the daughter I wouldn't trade any biological baby for.