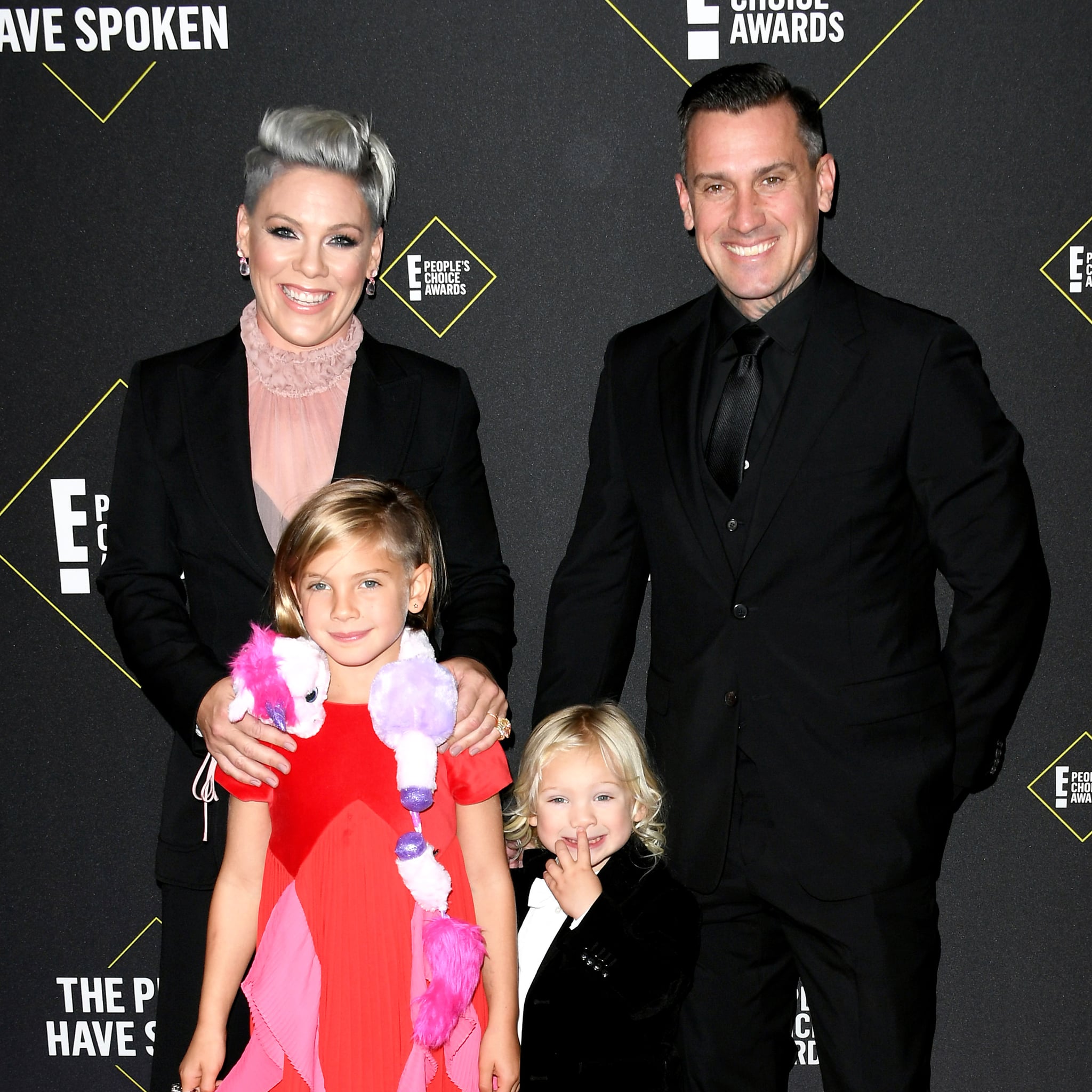 Pink recognizes how her fans see her, even if it's not exactly accurate. At one point in her new Amazon Prime Video documentary, Pink: All I Know So Far, she is futilely trying to discipline her then-toddler son, Jameson, for hitting her during bath time.

"Everyone always says, 'I love Pink because she never takes any shit,'" she remarks to the camera as Jameson, fully ignoring her, dances around the room. "I eat shit for breakfast."

It's a scene parents can fully relate to, even if they aren't selling out stadiums or belting out hits while performing jaw-dropping aerial stunts.

That's why the footage from 2019's Beautiful Trauma World Tour is so captivating. It shows what it's really like for Pink (real name: Alecia Beth Moore) to travel the world with two young children — daughter Willow, now 9, and Jameson, 4 — alongside her husband, former motocross racer Carey Hart. She reveals what it's like to be a mother who "takes all the oxygen out of the room," why Carey's patience is what holds their unit together, and what she hopes will happen when her kids eventually realize who she really is.

Read on for Pink's eight most moving quotes about parenting from All I Know So Far:

"For a lot of moms, when they become moms, they stop touring — because you can't imagine being able to do both. The only way I can justify dragging my family all over the world is that we're making memories together. I want it to be worth it. I want tour to be perfect for every person who walks through those doors with a ticket in their hands, but I also want it to be perfect in my kids' minds. And I kill myself to do both."

"Part of the joy I get out of parenting is watching him be a parent. I knew he would be a fantastic dad, but he's way better than I thought he'd be. He's incredibly patient. Otherwise how could he be with someone like me for this long? He steers Jameson in completely the wrong direction — it's unsafe, it's unsmart. He hurts Willow's feelings every single day, but he is a great dad and he's consistent, and he always shows up. He always says yes. When I'm exhausted and I don't want to do something — I don't want to play in the dirt, I don't want to play with trucks — he's like: 'Yep, whatever you want to do, I'm there.'"

Pink on the dynamic between Willow and Jameson . . .

"Willow told me that she feels invisible around Jameson. Broke my heart. Two-year-olds get more attention than 8-year-olds. That's just the way it is, because at the end of the day, 2-year-olds are helpless little psychopaths and they're narcissists and it's developmentally correct for them to be that way. It doesn't help with Jameson commanding that much attention. Willow was never like that when she was his age. For five and a half years, it was just her and I, and having him was like ripping a Band-Aid off — or ripping off a limb, more like. It's been hard for her the whole time, it's never been easy for her. I did tell her, at one point, 'Well, your mother is a performer who takes all the oxygen out of the room and then in comes your brother who's the mini version of me. How could you be anything but invisible?'"

Pink on the gift she plans to give Willow one day . . .

"Jameson is a walking, breathing, naked loose screw, and he is as equally committed to his anger as he is to his joy. In that way, he's also like me. But he scares the shit out of me."

Pink on the benefit of taking her children on the road . . .

"I worry about taking them on the road and them not having a normal life, but I look around at the people we're surrounded by . . . we have culture around us all the time, and it's all people who are incredibly passionate about what they do, and they get to be around these people all day long. That's what my kids get to see. Every room they walk into, they're like, 'Wow, there's another person following their dreams.' That's more of an education than I got."

Pink on the greatest thing her mother ever told her . . .

"Before I became a parent, I didn't want to be a parent, because I didn't want to have the kind of relationship that my mom and I had and I was terrified of it. . . . The thing that surprised me the most was that I really loved being a mom. My mom said to me — it was one of greatest gifts of my life — she said to me when Willow was 4, she looked at me with tears in her eyes and said, 'I just never knew parenting could be this enjoyable until I saw you do it.'"

Pink on her children discovering who she really is . . .

"My kids have never seen me as anything other than this. They grew up with the hotels and the jets and the never having to worry about things like money and safety. I'm their mom, I'm their friend, but one day they're going to see through all of it. They are going see through the act. They're going to see through the strength and they're going to find the truth underneath, I hope. They're going to discover little Alecia, who is still hiding in here and who is still learning how to heal. I just hope they have the grace and the heart to accept my mortality and to accept that I'm human like them. Then they'll have their own kids, and so the cycle continues, all of it. The multigenerational pain, sure, but also the damn beauty of it all."