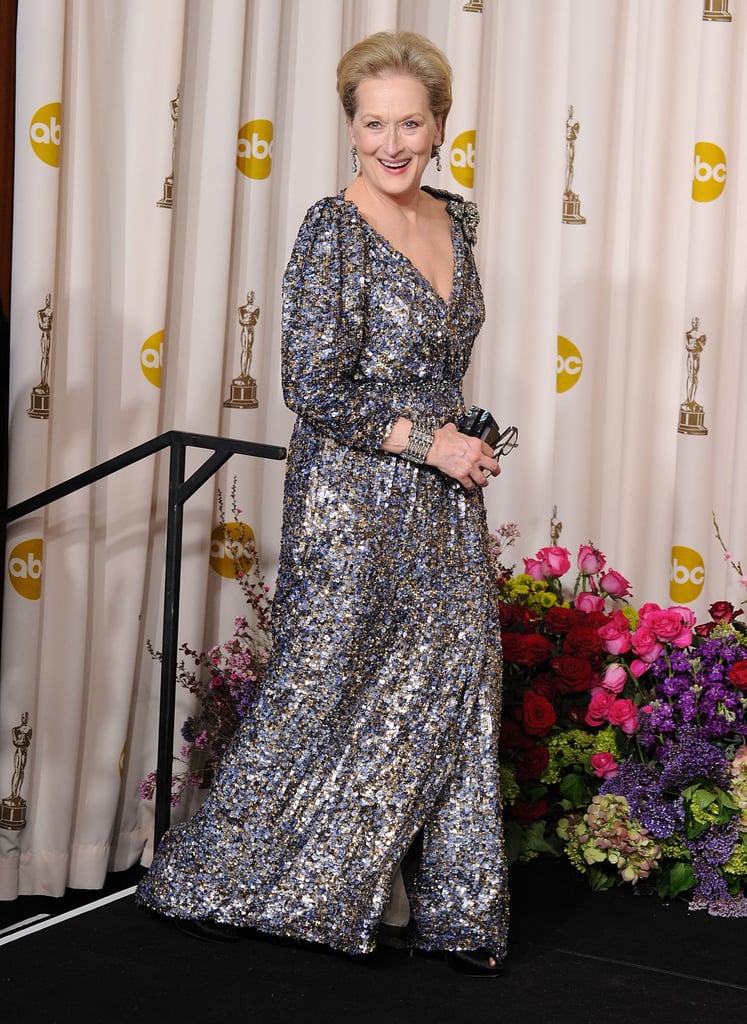 And Who Could Forget This Stunning Number From the 2013 Oscars?

Update:
Meryl Streep quickly walked the red carpet at the 2017 Oscars, making an appearance on stage in a custom Elie Saab gown that she accessorized with Fred Leighton jewels and a Charlotte Olympia clutch.

Update:
After statements were released by both Meryl Streep's stylist and the Chanel brand about the drama surrounding Meryl's Oscars dress, Karl Lagerfeld and Meryl themselves are speaking out. Karl regards the events as a "misunderstanding," saying:

"Chanel engaged in conversations with Ms. Streep's stylist, on her request, to design a dress for her to wear to the Academy Awards. After an informal conversation, I misunderstood that Ms. Streep may have chosen another designer due to remuneration, which Ms. Streep's team has confirmed is not the case. I regret this controversy and wish Ms. Streep well with her 20th Academy Award nomination."

Meanwhile, Meryl seems to be on the fence about accepting this as an apology and generally uncomfortable about the hype built around her appearance at the Oscars:

"In reference to Mr. Lagerfeld's 'statement,' there is no 'controversy': Karl Lagerfeld, a prominent designer, defamed me, my stylist and the illustrious designer whose dress I chose to wear, in an important industry publication. That publication printed this defamation, unchecked. Subsequently, the story was picked up globally, and continues, globally, to overwhelm my appearance at the Oscars, on the occasion of my record-breaking 20th nomination, and to eclipse this honor in the eyes of the media, my colleagues and the audience. I do not take this lightly, and Mr. Lagerfeld's generic 'statement' of regret for this 'controversy' was not an apology. He lied, they printed the lie, and I am still waiting," Meryl said.

Update:
Meryl Streep's stylist, Micaela Erlanger, spoke to The Business of Fashion, detailing the process of selecting Meryl's Oscars dress along with her own beliefs about monetary compensation when it comes to red carpet dressing:

"As a stylist working with a nominee for any major event, it's industry standard for designers to propose gown ideas and sketches — some custom, some not depending on the occasion. In the case of Chanel's submission, which was presented with full knowledge that Ms. Streep and I — her stylist — were having conversations with various brands, we were shown sketches of a dress from their most recent Couture collection. Although [it was] an exquisite gown from the existing collection, we decided to go in a different direction, with another designer. At no point were there any conversations regarding monetary compensation. Nor were any other brands considered based on their willingness to pay for placement. This is not how my company operates and is very much a practice in conflict with Ms. Streep's personal ethics. Any reports or quotes stating otherwise are a complete fabrication.

Update:
We reached out to Chanel, who released the following statement in regards to Meryl Streep's original request for an Oscars dress:

"Chanel engaged in conversations with Ms. Streep's stylist to design a dress for her to wear to the Academy Awards, with the full understanding that she was considering options from other design houses. When informed by the stylist that Ms. Streep had chosen a dress by another designer, there was no mention of the reason. Chanel wishes to express our continued and deep respect for Ms. Streep."

Original Post:
Days before the Academy Awards on Feb. 26, Karl Lagerfeld claimed that Meryl Streep abruptly turned down the gown he was in the process of making for her. Not only that, but the Chanel creative director also accused Streep of allegedly choosing a gown from a designer who was going to compensate her in return.

According to Lagerfeld, the venerated actress had reportedly requested an embroidered gray silk gown from Chanel's latest Couture collection. She did, however, ask that some alterations be made to the neckline. As Lagerfeld was in the process of customizing the dress, he said he received a phone call notifying him that Streep would instead be wearing a gown from a designer who was going to pay her.

In an interview with Women's Wear Daily, Lagerfeld explained, "I made a sketch, and we started to make the dress." He then said he received a phone call from one of Streep's representatives who said, "Don't continue the dress. We found somebody who will pay us." He additionally insisted that Chanel never pays celebrities to wear their designs. Lagerfeld then snuck in one final dig when he said, "A genius actress, but cheapness also, no?"

While Lagerfeld is sticking to his story, a member of Streep's team is saying otherwise. In a statement to The Hollywood Reporter, the representative said the claims are entirely false. Adding, "It is against [Meryl Streep's] personal ethics to be paid to wear a gown on the red carpet."

We may never be able to get down to the bottom of this one, but we at least learned a little bit about what Streep might wear on the Oscars red carpet! Since she originally chose a gray silk gown, it's likely that she'll end up going for a similar option from a different designer, of course. In an attempt to narrow down our prediction, we rounded up gray gowns that the actress has worn through the years, as well as a similar piece from Chanel's aforementioned couture collection.