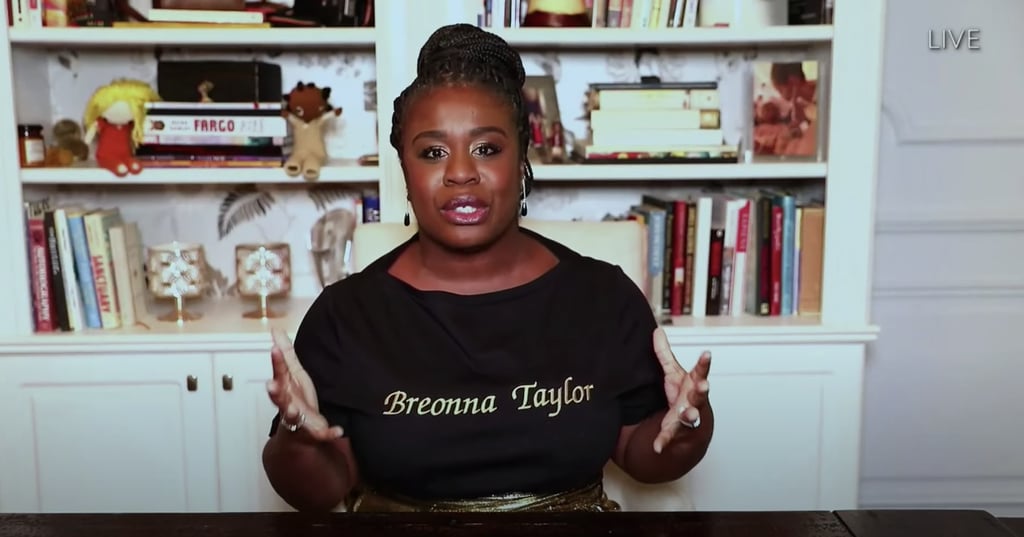 On Sunday, Sept. 20, multiple celebrities showed their support for the racial-justice movement at the 72nd annual Primetime Emmy Awards, both in their acceptance speeches and in the outfits they chose to wore. Celebrities like Regina King and Uzo Aduba wore shirts honoring the memory of Breonna Taylor, and actors like Sterling K. Brown and Yvonne Orji put their own empowering twists on their awards-night outfits.

Killing Eve star Sandra Oh also wore a custom bomber jacket made by KORE (Keeping Our Roots Eternal) that features the words "Black Lives Are Precious" embroidered in Korean. She paired the look with W.Rosado Pearl ID earrings, a necklace, and a matching embroidered face mask. Watchmen writer Damon Lindelof also made a powerful statement with his "Remember Tulsa '21" T-shirt, which referenced the 1921 Tulsa Race Massacre, a racist attack on Black residents of Tulsa, OK, by mobs of white residents.

During the show, celebrities also pointed out their disinclination to celebrate during a period of such great social and political unrest in the US and urged viewers to vote in the upcoming presidential election. See their outfits inspired by the fight for racial justice here, and find out what you can do to support the protest for racial equality at home.