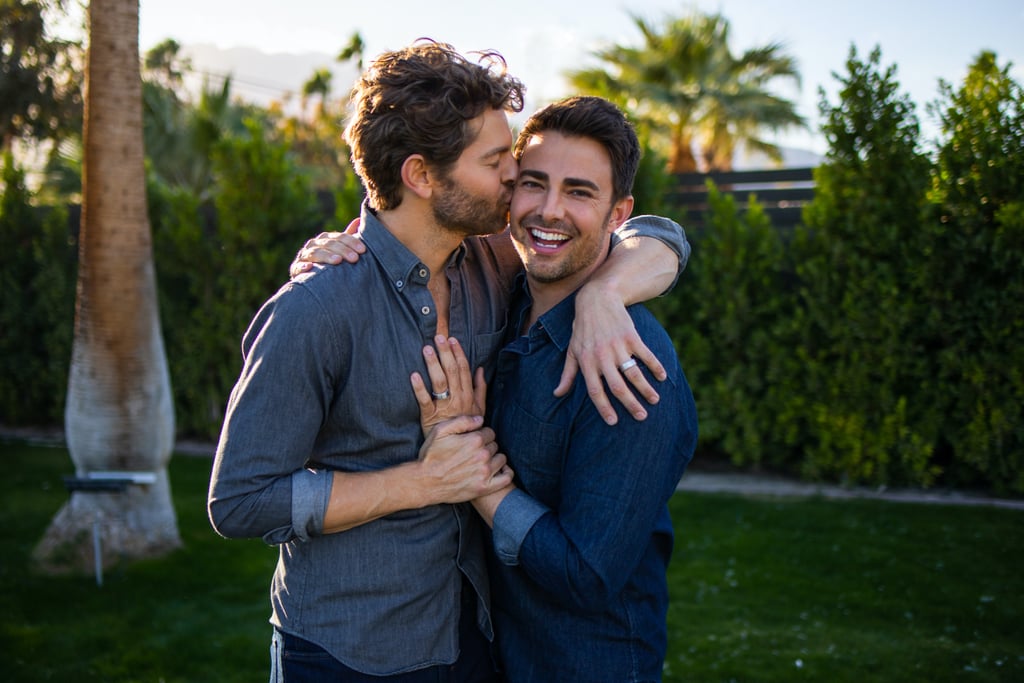 Mean Girls actor Jonathan Bennett, who plays Aaron Samuels in the iconic film and stars in The Christmas House, is engaged! His partner of three years, TV host Jaymes Vaughan, proposed in a romantic backyard setting over the Thanksgiving holiday, and the video of their celebration (which you can see below) is sure to bring about one of those "I'm not crying, you're crying" moments you'll want to share with all your friends — or just rewatch on repeat for hours.

Jaymes worked with Kay Jewelers on creating a ring design that's special to the couple not just because it's personal, but because it offers up a unique idea for other LGBTQ+ couples dreaming up engagement rings. The bands, which have a brushed satin finish, are lined with diamonds on one side, made to be worn outward while Jonathan and Jaymes are engaged. Once they're married, they plan to flip the rings so the diamonds are facing inward.

It was important Vaughan work with Kay Jewelers because of the company's ongoing support of the LGBTQ+ community. "I told Kay I had an idea to create something not only for our special moment, but something other LGBTQ+ couples might be inspired by for their rings too. The idea of the ring in general is really special because at its core it's symbolic. It's symbolic of the union between two people and its symbolic of what the relationship is to those two people," he told People. Jaymes even plans to talk openly about the sentiment behind the design process on Kay's social platform The Union, which provides engagement advice.

Kay sent along a detailed shot of the custom rings that you can see up close ahead. But first, enjoy the stylish shots of Jaymes and Jonathan getting engaged in head-to-toe chambray denim, watch the film, and dry your eyes so you can actually see the simple, meaningful ring design in all its glory.