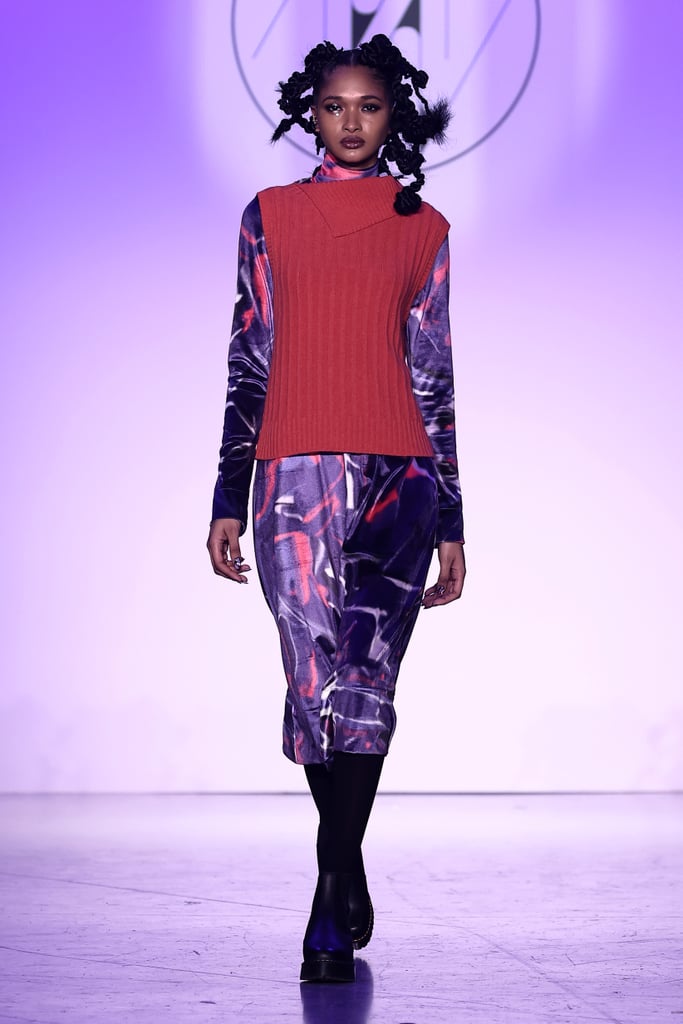 Marrisa Wilson's NFT Designs Are Straight From the Future

On the second-to-last day of New York Fashion Week, the gallery at Spring Studios was transported into the future. Drenched in red and purple light, models sporting braided updos, NFT bomber jackets, and skirts in digital prints danced down the runway. It was the Marrisa Wilson fall 2022 show and the designer's debut presentation on the Fashion Month calendar.

Raised in New Jersey by Guyanese parents, Wilson knew her fashion show would be different. Where models appeared stoic and even solemn at other NYFW shows, Wilson encouraged her cast to "turn up [their] energy" and show up as their authentic selves, she told POPSUGAR backstage. That materialized in an extra sway of the hips, a twirl before disappearing into the wings, or a powerful pose struck in full view of the photographers. Their confidence was palpable.

And while the clothes were wearable — colorblock turtlenecks, printed skirts, knit vests — the beauty look felt straight out of an Afrofuturism photo shoot. Locs and braids were fashioned into intricate styles — some pinned up, some flowing freely — while the shimmery makeup would fit right in on "Euphoria." "It's how I incorporate my essence and culture into all the collections," Wilson said.

The color palette was rooted in Pantone's color of the year, Very Peri, with touches of red, black, gray, and brown. One of the most compelling designs was a purple blazer with a single black lapel: a wardrobe staple that Wilson somehow made exciting and special again.

The bomber jackets, which featured phrases like "Power On!," will become a staple for celebrities looking to show personality with their street style looks. ("I feel like Rihanna can work this jacket with her baby bump," Wilson said.) Each jacket featured a thumbprint that unlocked access to an NFT (nonfungible token) of Wilson's fashion illustrations.

"I know you've seen what a lot of these NFTs look like, and they are auto-generated and [have] editions of hundreds or thousands, but I wanted to incorporate my craft," she said. "I still believe in old-school fashion illustrations, and that's part of my process." It was a peek into the future as Wilson envisions it.

Read on for the inspiration behind her collection, her career highlights, and her thoughts on the state of Black representation and inclusivity in fashion.