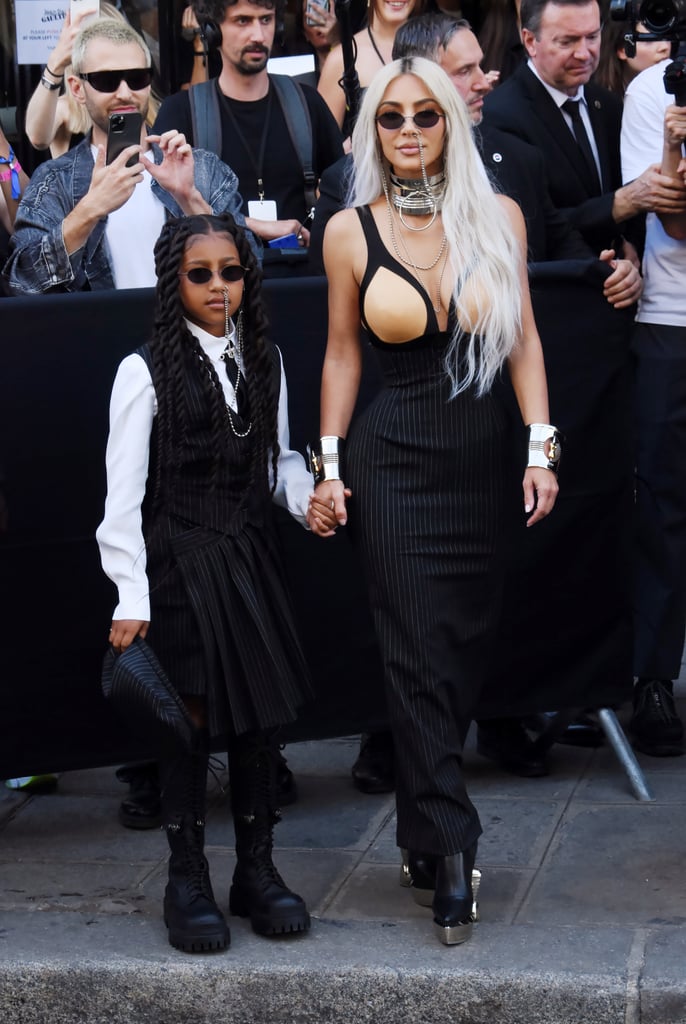 Likely influenced by her father Kanye West's personal style, North West is taking the fashion scene by storm with oversize silhouettes and edgy details, like leather jackets and chunky combat boots. She may be young, but she's already displaying a strong fashion aesthetic. Of course, it helps to have the assistance of expert stylists who can source designer pieces. At Paris Couture Fashion Week, the 9-year-old joined her mom, Kim Kardashian, and her grandma Kris Jenner for several public appearances, further proving she's a formidable fashion force in her own right.

First, she made a case for varsity jackets, wearing a cobalt-colored, oversize Pastelle jacket that she just might have swiped from her dad's closet (he wore it on stage at the 2008 American Music Awards). The outerwear piece — which was part of Kanye West's discontinued streetwear line — combines a deep-blue top half and light-blue bottom half for a striking colorblock moment. It also features the Pastelle label in bright yellow on the left side, red zippers on each side, and matching leather shoulder pads. North West paired it with black baggy pants and Balenciaga's Hardcrocs sandals for a fashion-forward look. On the accessory front, she reached for a pair of blue square sunglasses, a mini Balenciaga City bag, several silver rings, and a beaded necklace.

Later that day, West traded her dad's outerwear for another oversize number, this time a bedazzled black denim jacket. She wore a black T-shirt underneath but appeared to have stuck with the same pants and footwear. She then swapped the blue sunglasses for futuristic-looking black ones. The following day, West attended the Balenciaga couture show in an equally cool outfit, sporting a long-sleeved graphic T-shirt paired with ripped black jeans and her go-to Balenciaga platform sandals. This time, she accessorized with a sparkly black Balenciaga Hourglass bag, plus a few necklaces and the sunglasses from the night before.

The same day, West turned the cobblestone streets of Paris into her own personal runway when she and Kardashian arrived at the Jean Paul Gaultier couture show wearing coordinated pinstripe outfits and matching nose rings. The fashionista embraced steampunk style in a pinstriped vest and skirt, complete with a white collared button-up and black tie, a matching beret, and knee-high combat boots.

Ahead, take a closer look at the young style icon's latest ensembles and shop some of her exact designer items.

Street Style
The Top 8 Street Style Trends of the Season, as Seen on Fashion Editors
by Mekita Rivas 13 hours ago