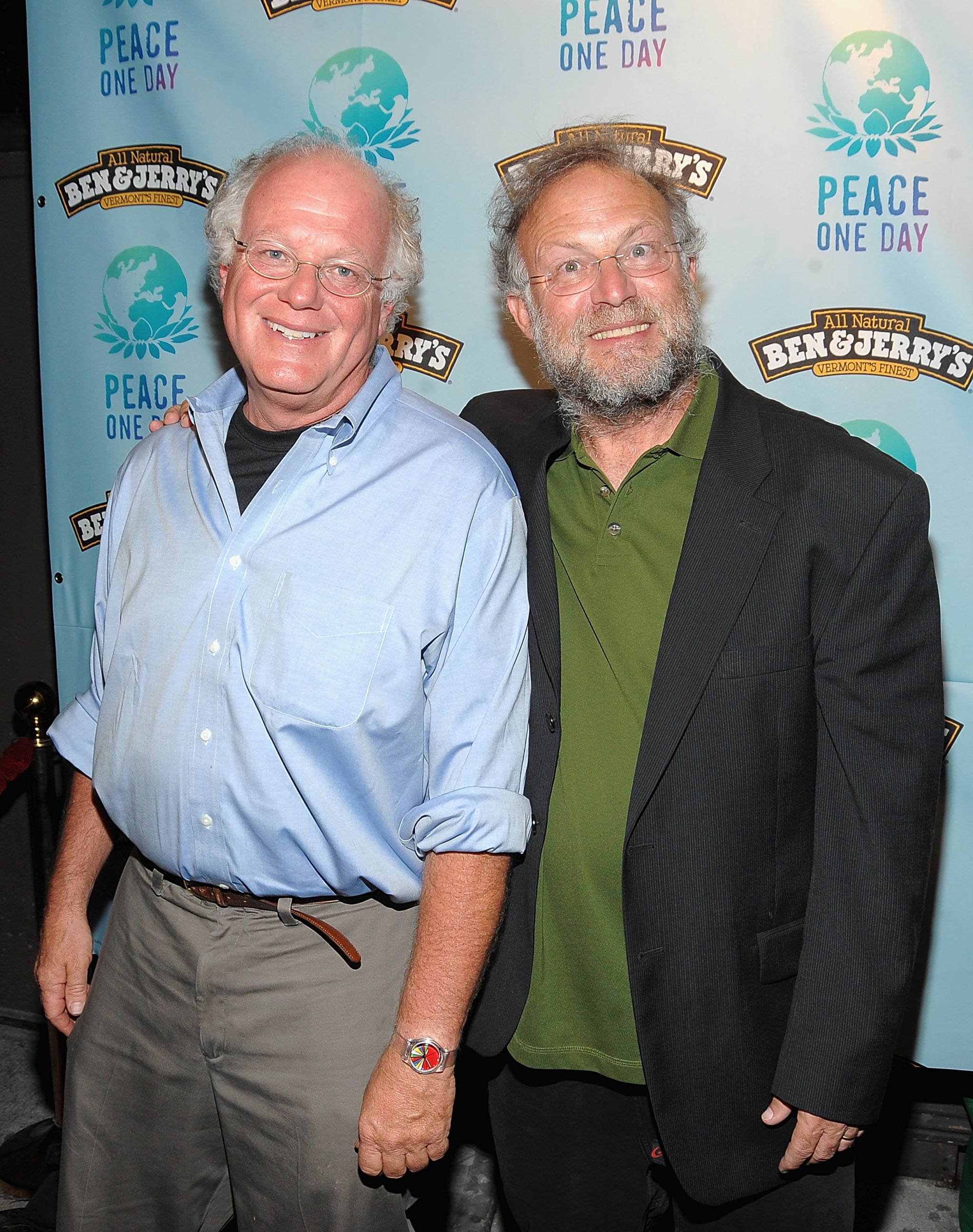 If you didn't already find Ben Cohen and Jerry Greenfield, the founders of Ben & Jerry's, utterly charming, spoiler alert: you're about to. Yesterday, the duo revealed many exciting tidbits in a Reddit IAmA, including how they settled on the iconic brand's name, what a Ben & Jerry's baby is, and, most excitingly, that new Core flavors will hit freezer shelves next week.

Reddit user Clarkson2207: How did you guys come up with the name?
Ben Cohen: I was thinking we should call it "Josephine's Flying Machine." . . . So anyway, it was a really stupid idea, which is what Jerry said, and we realized it was traditional for an ice cream parlor to call itself by the names of the owners. And then the question was: should Ben or Jerry come first? We decided that the E sound belonged at the end, it just rolled off the tongue better. Because of that, we made Jerry the president of the corporation. I don't know what I was. Subcommander president?
Jerry Greenfield: And the pint containers, you might notice, have a photo of Ben and me. When the ice cream first came out, the photo pretty much covered the entire lid of the container. And over the years, the size of it has been getting progressively — now it's about the size of a nickel, I think, and in no time at all, we should be down to the size of a dime.

Reddit user adisobedientavocado: What is the best reaction you have ever seen because of your ice cream?
BC: Well, it was the woman who came up to me and said "I call one thigh BEN and the other thigh JERRY."
JG: I like it when people come up and talk about how they have Ben and me in their freezer, as if our little heads are stuck inside their freezers!

Reddit user Dani_California: . . . Having been recently pregnant and a huge fan of your products, I think you should create a joke flavor pairing like pregnancy pickles ice cream. Mmmmm.
JG: You know, I've heard many stories about pregnant women sending their husbands out on late night ice cream runs. And they have a particularly specific flavor that they want. And husband might end up going to three or four different stores to try and find that flavor. Obviously, it is VERY important to find the particular flavor a pregnant woman wants. Ben, at one time, thought of setting up a program whereby there were certain stores that would have ALL Ben & Jerry's flavors — all the time. "AFISAAT." All Flavors In Stock At All Times. It obviously is a brilliant idea that Ben & Jerry's has not seen brought about. But that would solve a big problem for many pregnant women and their doting significant others.
BC: Also, here in Vermont, there's a phenomenon known as "Ben & Jerry's babies." They come out REALLY big. Those are babies from moms who have eaten a lot of Ben & Jerry's ice cream during their pregnancy. And the babies come out very robust.

Reddit user Frajer: What puts a flavor in the flavor graveyard?
BC: It doesn't matter if I like the flavor or if [Jerry] likes the flavor — if not enough people buy it, it goes bye-bye.

Reddit user RecycledAccountName: I have one very pressing question. You guys are based in Vermont. Vermont is the United States' largest producer of maple syrup. Where is the maple syrup infused ice cream? I didn't forget about the Maple Blondie Limited Batch you guys put out a few years back. That stuff was delicious and I still think about it before bed occasionally. Any thoughts to bring this flavor, or another maple syrup concoction, back into my life?
JG: It's a fantastic question. Ben & Jerry's has made many flavors flavored with maple syrup over the years, dating back to when we first opened in a homemade ice cream parlor in 1978. And, uh . . . there is this idea that people have that because Vermont produces so much incredible maple syrup that the natural thing is to put it in Ben & Jerry's ice cream, but unfortunately very few people purchase those flavors. It is a DELICIOUS concoction. I personally LOVED Maple Blondie when we were making it. But the marketplace has spoken, once again!
BC: Well, in the early early days, I was the ice cream delivery person. And in the early early days, we had a Vermont Maple Walnut ice cream. It was a flavor. And nobody ever bought it, and I'm wondering Why is there this flavor and I finally did a promotion one time, at the State Capitol House, and I discovered the only people who eat Maple Walnut are politicians. I think they're just trying to prove that they're really Vermont-y or something!

Reddit user MayorCrab: Waffle or sugar cone?
BC: Well, waffle has two meanings — like homemade made there right in the store? Definitely that.
JG: I gotta go with a waffle cone also. It's got the texture. It's got the crunch without being brittle or splinter-y. And you can shove a LOT more ice cream into a waffle cone than you can on a sugar cone.

Recipes
No Bonfire, No Problem: These Air Fryer S'mores Taste Like Exactly Like Summer
by Lauren Dana 4 days ago