Nothing's more romantic than a recipe made by the one you love, and this chili recipe is no exception. The Kitchy Kitchen shares her fiancé's intense chili recipe that is near and dear to her heart. Plus it's crazy tasty, so enjoy! 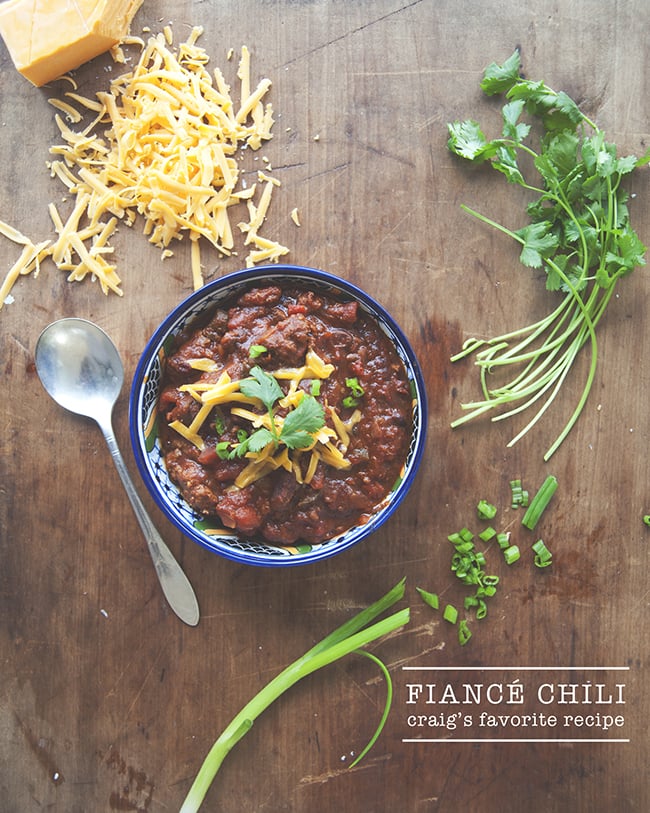 Craig, my fiancé, is obsessed with his chili. He's almost as obsessed with "the back video" (a youtube video featuring a variety of stretches to help strengthen your lower back), and I'm pretty sure I'm number three on that list. Fourth is whiskey and indie rock – tied. Fifth is arguing with his brother, Eric, over "Top Five" lists. But hey, he REALLY loves his chili and back video you guys, so I've made my peace with this arrangement.

Here's the deal: Craig and his friends concocted the perfect chili recipe in business school. They slow roasted and ground up the chilis themselves, let it simmer for a million years, served it with homemade cornbread, and when the Business School Chili Cook Off was over, they were the obvious audience favorite. But then . . . the judge went with the team that paired their chili with a whiskey (foiled, by his fourth favorite love!). LAME. WAKE UP JUDGE. WAKE UP AND SMELL THE CHILI. Sorry, I take Craig's chili very seriously.

For good reason too: it's intense, rich, and definitely spicy. Like – very very spicy. Hence I edited the recipe to say "up to 4 jalapeños" instead of Craig's overly confident "4 jalapeños." It's also very easy to make, and perfect for a crowd – or one very hungry Craig. I love this chili, I love my man, I hope you love it too! Just the chili though, Craig's all mine. No take-backs. 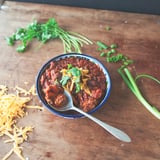 Image Source: The Kitchy Kitchen
RecipesChili
Around The Web