I was in one of those deep holes on YouTube when I came across a music video that started off as a series. A diner in the middle of nowhere, with the TV on the news channel, highlighting a "massive immigration" across what seemed to be the US-Mexico border, and a beautiful waitress handing the check to a man sipping on his coffee.

The man gets upset because he's not done, and the waitress doesn't seem to understand English that well. Another waitress steps in and tells the man he can have the coffee on the house if he just leaves now. Music starts. Seems familiar, but I can't quite figure out the song.

Flor de Toloache, Latin Grammy winners and the first and only all-women Mariachi group, begin singing. It hits me. This is Juan Luis Guerra's "Quisiera" reimagined with some Mariachi elements, but keeping it as a ballad. I was intrigued. "Quisiera" is one of Juan Luis's modern classics, released in 1998 as part of his album No es lo Mismo Ni es Igual and the quintessential love ballad that to this date still brings couples together.

Juan Luis Guerra Was Honored at Premios Billboard, and Hell Yeah, He Deserved It!

Not only was Flor de Toloache killing it, but the story in the video also involves the two waitresses developing feelings for each other. This was the perfect combination of Latinx and LGBTQ+ power, and just when I thought things couldn't get any better, the camera pans to a corner table, where a dapper man wearing an all-white suit and pink handkerchief is sitting down.

After a closer look, I realized it was John Legend. "Oh sh*t!" I thought, "Is he going to add some English verses now?" But no. John Legend began singing in Spanish. With perfect pronunciation, the sexiest voice, and incredible confidence that had me melting on my couch. 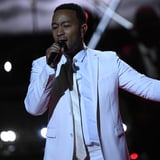 How could this man be so perfect? To be honest, now that I know he can sing more than one verse in Spanish, I want him to translate all of his songs. If it's even possible, he actually sounds better in Spanish. I can't deny I started getting all sorts of hot flashes because the whole thing was just so damn sexy.

Then, I looked at the date when the video was released. It said December 2019. "Wait, what?" I thought. How was this not publicized, shared, and posted all over social media? The measly 30K views don't do this masterpiece justice. So, because I believe in sharing the great things we come across in this world, I'm sharing the video with you so you can feel all sorts of fuzzy feelings like I did and add this track to your sexy playlists.

John LegendMusicMusic Videos
Around The Web

Nicole Richie
6 Times Nicole Richie, aka Nikki Fre$h, Proved She Was Born to Be a "Trap Star"
by Monica Sisavat 1 hour ago

The Voice
The Voice: This Rihanna Cover Was So Intimate, Nick Jonas Wasn't Sure If He Should Look Away
by Kelsie Gibson 7 hours ago