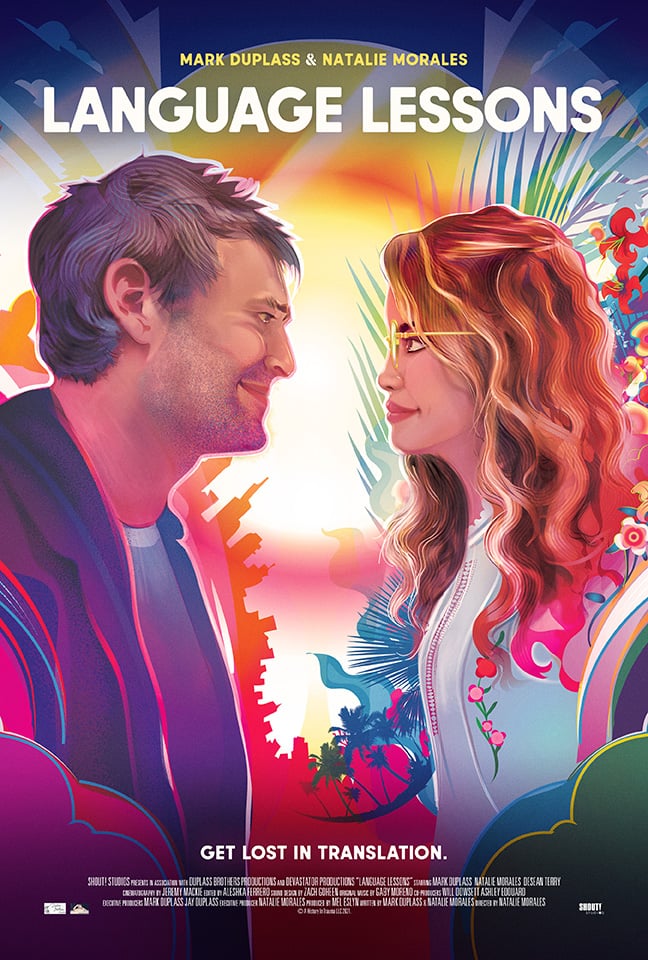 Opening in select theaters nationwide on Sept. 10, Language Lessons is the perfect embodiment of Cuban American Natalie Morales's signature style. It's got her cunning wit and equally smart ability to empathize. Morales directed, cowrote, and stars in the film alongside Mark Duplass (The Mindy Project, The One I Love). The plot (spoilers coming) follows Morales as Cariño, a Spanish teacher hired to give Duplass's Adam two years of language lessons. When the unthinkable happens, the two strangers find themselves relying on their budding friendship, despite their differences in gender, class, ethnicity, and geography.

At its core, Language Lessons is a film that asks us to take better care of others and ourselves. And with Cariño as half its cast, it has particular lessons for us Latinas, dramatizing our best and worst wellness practices. Watching it, I was struck by how this touching, funny film packed so many takeaways about mental health without ever feeling preachy or overly sweet. I'm planning to try to learn from Cariño's example, instead of figuring out everything the hard way (or worse, repeating the same mistakes again and again). Feel free to join me — here's what I picked up:

On the face of it, it doesn't seem like Cariño and Adam should be friends. He's rich and white and a bit clueless about how having all that money changes his life, while Cariño literally works for him. She's in another country and has to explain stuff like how she can be a bilingual Latina who studied in the States but now lives in Costa Rica. Plus, there's the whole men-and-women-can't-be-friends thing.

But they do end up as friends, and their friendship turns out to be super valuable, perhaps even life-saving. And there's an important lesson for us there: friendships can sprout in unlikely places, and they're not trivial. I don't think it's a coincidence that Americans have fewer friends than ever before, and we're facing a mental health crisis. We need friends, outside of our romantic relationships and families. We need folks who don't need us: that is, not in the way a partner, parent, or kid does. And I'm glad Language Lessons helps show us what that looks like and why it matters.

We all know the "negative" way of dealing with our problems: picking fights with people who have nothing to do with what we're struggling with or even drinking too much. And even though we know acting like this won't solve anything, it's a pretty human response. I'm guilty of it. But we shouldn't normalize these behaviors just because they're common. If we do that, we risk forgetting that they can actually make whatever we're dealing with worse. It's hard watching Cariño drink too much, lash out, and close down, if only because there's nothing like watching someone make a mistake you've made to bring up all those cringey feelings of regret and shame. We have to find better ways of handling our problems. Self-destruction isn't the answer.

Knowing Yourself Is So Crucial

Adam and Cariño start out as strangers and only interact through a screen for the vast majority of the film. They also come from very different places, and Adam, in particular, brings some of the false assumptions that come with that. His imagination fills in the blanks about Cariño, often reaching the wrong conclusion (like she must be the victim of abuse).

But Cariño never lets Adam's ideas about her define her, despite her lower status level. She's very clear on who she is, faults and all, and she never gets confused about it. I think that's what makes their friendship possible. It's easy, sometimes, to get wrapped up in someone else's idea of you. But if you do that, you can't form a real relationship with that person — it's all just fantasy. By consistently asserting herself, Cariño never lets Adam encroach on her; she doesn't become resentful, his relative power doesn't drown out her voice. Instead, they literally build a common language together, and that's a beautiful outcome of knowing yourself.

We Need Each Other

I like to rely on myself. I'm not sure if that's personal or cultural, but I do know a lot of strong Latinas who, like me, aren't particularly interested in asking anyone for help. That's a terrible strategy, though, and not a good way to go through life. In Language Lessons, Cariño tries to go at it alone. She doesn't want to talk with Adam about what's going on in her life, about her fears, needs, and own experience with loss, despite his honest and repeated offers to help. But that doesn't get her very far. She's clearly not getting the support she needs, and eventually, her problems bubble up, resulting in her drinking too much, revealing things she later regrets, and becoming combative and closed off. But she doesn't stay stuck there.

Language Lessons has a happy ending, and it's Cariño admitting she needs help and then getting it. May that be a lesson to us all. I can't think of a more important one.

Identity
2022 Has Been a Dangerous Year For the LGBTQ+ Community. Here's How We Can All Help.
by Nayanika Guha 15 hours ago