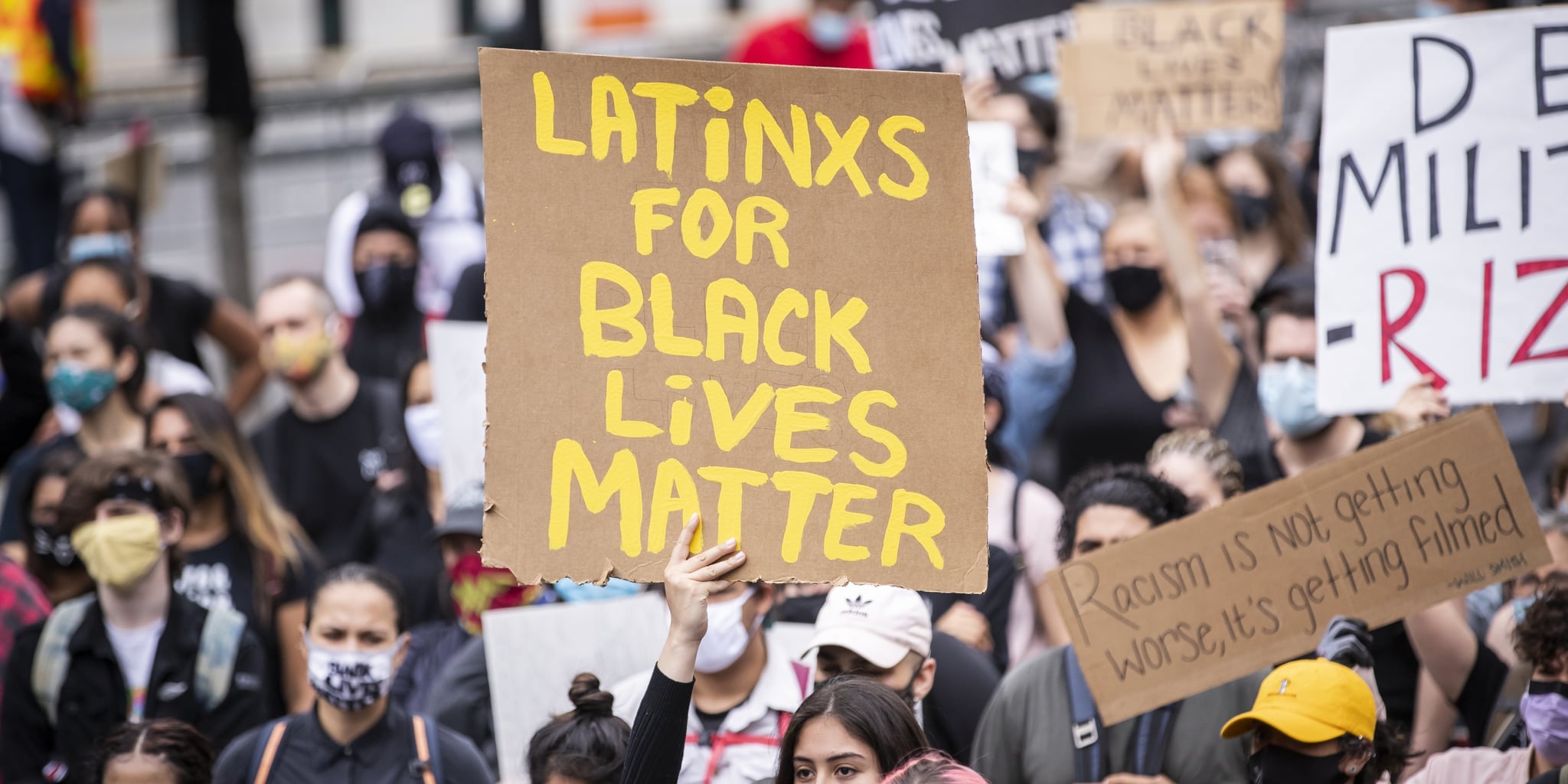 As a Latina in the US, I find it frustrating when I hear fellow non-Black Latinx downplay Black Lives Matter. Not only because a lot of us come from countries where our African heritage is imminent, and the Black men and women who have died as a result of police brutality look just like our tío, our prima, or even our brother, but also because what happens to a minority group ultimately affects us, too. While we might never understand the level of police brutality the Black community is experiencing, we understand discrimination, and we understand fighting for our rights. Furthermore, the outcome of these protests will be beneficial for other communities as well, including ours.

The history of this country backs me up. If it weren't for the civil rights movement, Latinx in the US wouldn't have the rights and privileges we enjoy now. While many of us see it as a fight by Black Americans to end discrimination against Black people, the movement also made strides toward equal rights for other underrepresented groups as well.

If we're getting specific, we can mention Oliver Brown, who, encouraged by the work of the National Association for the Advancement of Colored People (NAACP), filed a class-action suit against the Board of Education of Topeka, KS, in 1951 after his daughter Linda was denied entrance to Topeka's all-white elementary schools.

In the lawsuit, Brown claimed that schools for Black children were not equal to the white schools and that it violated the "equal protection clause" of the 14th Amendment, which holds that no state can "deny to any person within its jurisdiction the equal protection of the laws."

Brown's case was combined with four other school-segregation cases and taken to the Supreme Court, and in 1954, the Brown v. Board of Education of Topeka case ruled unanimously that racial segregation of children in public schools was unconstitutional.

While it took years — and other manifestations — to fully enforce the end of racial segregation in schools across the country, the ruling had a positive effect in brown communities that had been forced to send their kids to the so-called "Mexican schools."

No one — including Black people and other minorities — could be denied service simply based on the color of their skin. Discrimination by employers and labor unions was banned as well, and as a result, the Equal Employment Opportunity Commission was created.

A year later, two important changes took place: the Immigration and Naturalization Act of 1965 and the Voting Rights Act of 1965. The Immigration and Naturalization Act of 1965, also known as the Hart-Celler Act, eliminated immigration based on the national-origins quota system and provided for preferences to be made according to categories, such as relatives of US citizens or permanent residents, those with skills deemed useful to the United States, or refugees of violence or unrest.

These changes to the US immigration policy happened thanks to the growing strength of the civil rights movement, and eventually, between 1965 and 2000, the highest number of immigrants to the US came from Mexico (4.3 million), with Cuba — where people were fleeing the communist regime — and Dominican Republic sending between 700,000 and 800,000 people each over this period.

Meanwhile, the Voting Rights Act of 1965 applied a nationwide prohibition of the denial or abridgment of the right to vote on account of race or color. No more poll taxes, literacy tests, and other bureaucratic restrictions that would deny not only Black people but also other minorities of color the right to vote.

Six years later, the Equal Credit Opportunity Act was enacted, making it unlawful for banks, retailers, bankcard companies, finance companies, and credit unions to discriminate against any applicant on the basis of race, color, religion, national origin, sex, marital status, or age — provided the applicant has the capacity to contract.

We Latinx have Black Americans to thank for helping us find our space in this country, and now it's our turn to show up and support, because the outcome of these protests will also benefit the way we're treated, as history has shown.