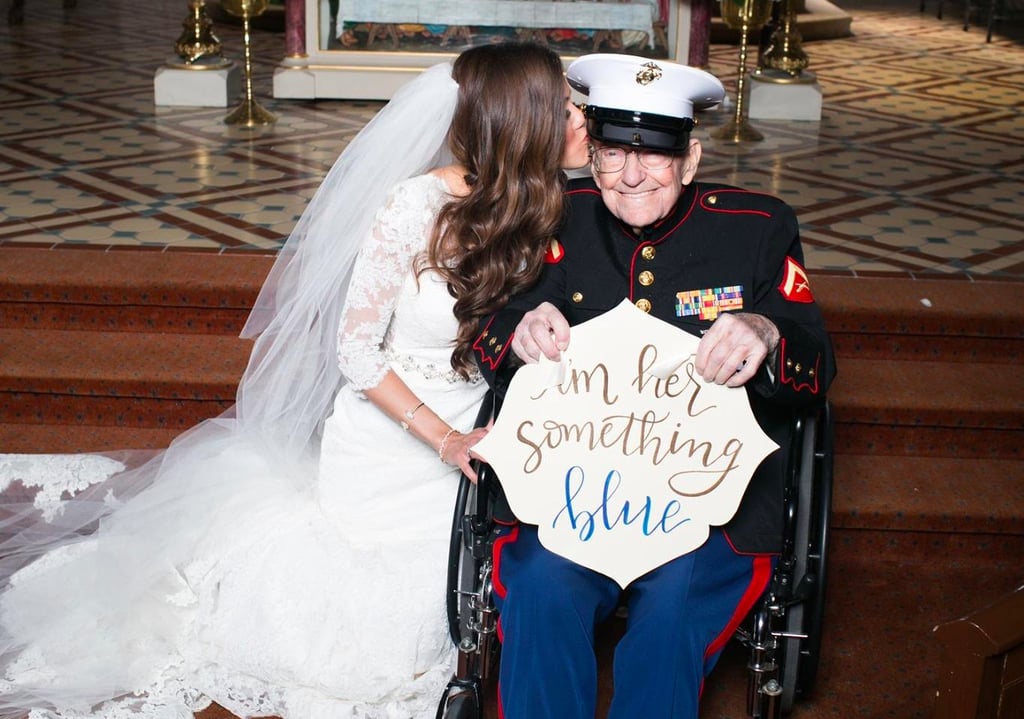 "Something old, something new, something borrowed, something blue." We've seen brides incorporate everything from fun shoes to family heirlooms as their "something blue," but Ali Ferrell from Cape Girardeau, MO, included her 92-year-old uncle instead. Bill Eblen, a US Marine Corps sergeant during World War II, fell ill with pneumonia and wasn't sure whether or not he'd be able to make his niece's wedding.

"'When we first got engaged, I knew that I wanted to include Uncle Bill in a special way," Ali told KFVS 12.

When the nurses asked Bill what his goal was, he responded, "'I want to be something blue in your wedding.'" He took his recovery seriously during his extended stay in rehabilitation and was able to go down the aisle and stand beside Ali at the altar.

"There wasn't a dry eye in the church when he was escorted down the aisle in his dress blues," Ali wrote on Facebook. "It was such an honor to have him serve as my "Something Blue" on my wedding day and a memory that will last a lifetime."

Grab some tissues and see more photos ahead!

Previous Next Start Slideshow
WeddingWedding TraditionsTouching Stories
Around The Web

Kobe Bryant
Vanessa Bryant on Managing Her Grief: "My Girls Help Me Smile Through the Pain"
by Murphy Moroney 21 hours ago

Wedding
This Couple Had to Cut Their 200-Person Wedding Down to 18 People, but They Did It With a Smile
by Haley Lyndes 3 days ago

Wedding
This Couple Ditched Their Georgia Wedding Plans For a Mountain Elopement in Colorado, and They Wouldn't Change a Thing
by Haley Lyndes 3 days ago