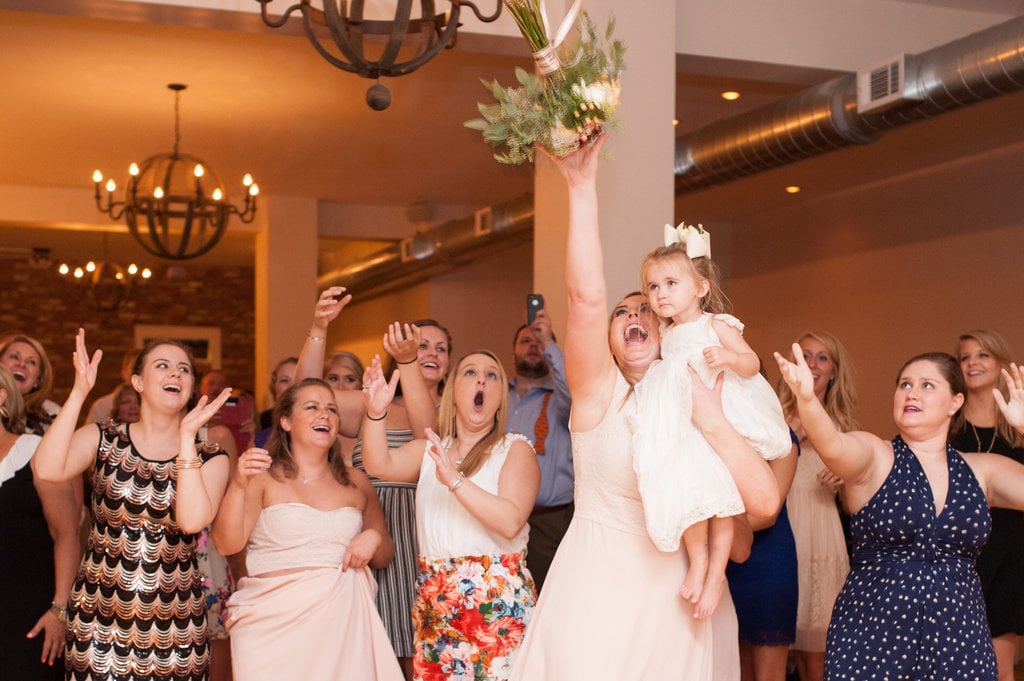 The first wedding I ever went to, I was a toddler, and I remember that halfway through the evening, all the women at the party gathered on the dance floor, tapping their toes and standing beside each other elbow-to-elbow, their smiles turning from beams of excitement to pouts of competition. I didn't understand what was going on until all of a sudden my eyes turned up toward the sky and I saw a tightly wound-together bouquet of well-smelling flowers fly through the air. Their hands reached up toward the sky and their hips shoved each other aside.

A heap of them wrestled on the floor, their heels digging into each other's calf muscles, until finally, one lady in a red-rose-colored knee-length dress stood up, with her hair all over the place, raising the bouquet high up in the sky.

When I was a little bit older and watched this happen again and again at weddings, I began to ask questions. What does one get if they catch the bouquet? Why do these women look as though the bouquet of flowers is a free Prada bag being tossed in the sky? Is it true that if you catch it you're really the next one in line to get married?

Most people answered these very different questions in the exact same way, with a laugh and a pat on my back.

But when I was a bridesmaid for the very first time, I found myself on that dance floor, vying for my chance to catch the magical bouquet of peonies. Much to my surprise, when the flowers were up in the air, I somehow caught them. I didn't push, I didn't shove, I just reached my right arm up and I grabbed it.

Standing in the middle of the dance floor, while everyone cheered, and my mom cried because this to her was a sign that her perpetually single daughter was now granted some luck in the love department, I decided to find out more about this wacky tradition.

Here are four truths about the bouquet-catching tradition.

The bouquet-catching tradition started back in medieval Europe, when single wedding guests viewed the bride's dress a symbol of good luck, so they would chase her and rip a piece off a piece of her dress. When wedding dresses became something that brides spent more money on, they would throw other objects as a distraction. The bouquet, later on, became the traditionally thrown object, since flowers symbolize fertility.

2. Most Single Gals Are Against It

Perhaps when you're young and the dance floor is packed with other fellow single women, it's a fun activity to try and be the one who catches the bouquet. But as you get older, and all your friends get married, and you find that it is just you and one other person on the dance floor, you start to roll your eyes when the DJ announces it's time for the bouquet toss or, like I recently did, you hide in the bathroom until the whole process is over.

It turns out that only19 percent of women were for the bouquet toss and 81 percent were against it.

3. It Can Get Violent

Think weddings are all about celebrating love and enjoying a stiff drink at the open bar? They are until it comes time for the bouquet toss. Then things can get pretty violent. Many injuries occur during this time, some by accident and some on purpose, since catching the bouquet is still a very competitive moment.

4. It's a Replaceable Tradition

Nowadays, instead of asking the single women to come together and catch a bouquet that indicates to them the idea that they will be the next to marry, oftentimes modern brides are swapping this tradition out with something more lighthearted and fun. One idea is to play a fun song and ask for all friends to come to the dance floor to celebrate together (single and non-married friends together).

Wedding
2020 Wedding? Add a Chic Face Mask to Your Wedding-Day Outfit
by Simrin Purhar 3 weeks ago