In Escaping Reality, tragedy and a dark secret forced Laura at a young age to flee all she has known and loved to start a new life as Amy. Now years later, her past catches up to her again. While on the run, Amy meets Liam Stone, a captivating billionaire recluse, who takes "tall, dark, and handsome" to a whole new level. He sweeps her into a passionate affair that pushes her to her erotic limits. Liam wants to possess her until all she craves is him. But is Amy too broken to submit? Don't miss the first book in the sexy, suspenseful new The Secret Life of Amy Bensen series from New York Times bestselling author Lisa Renee Jones. 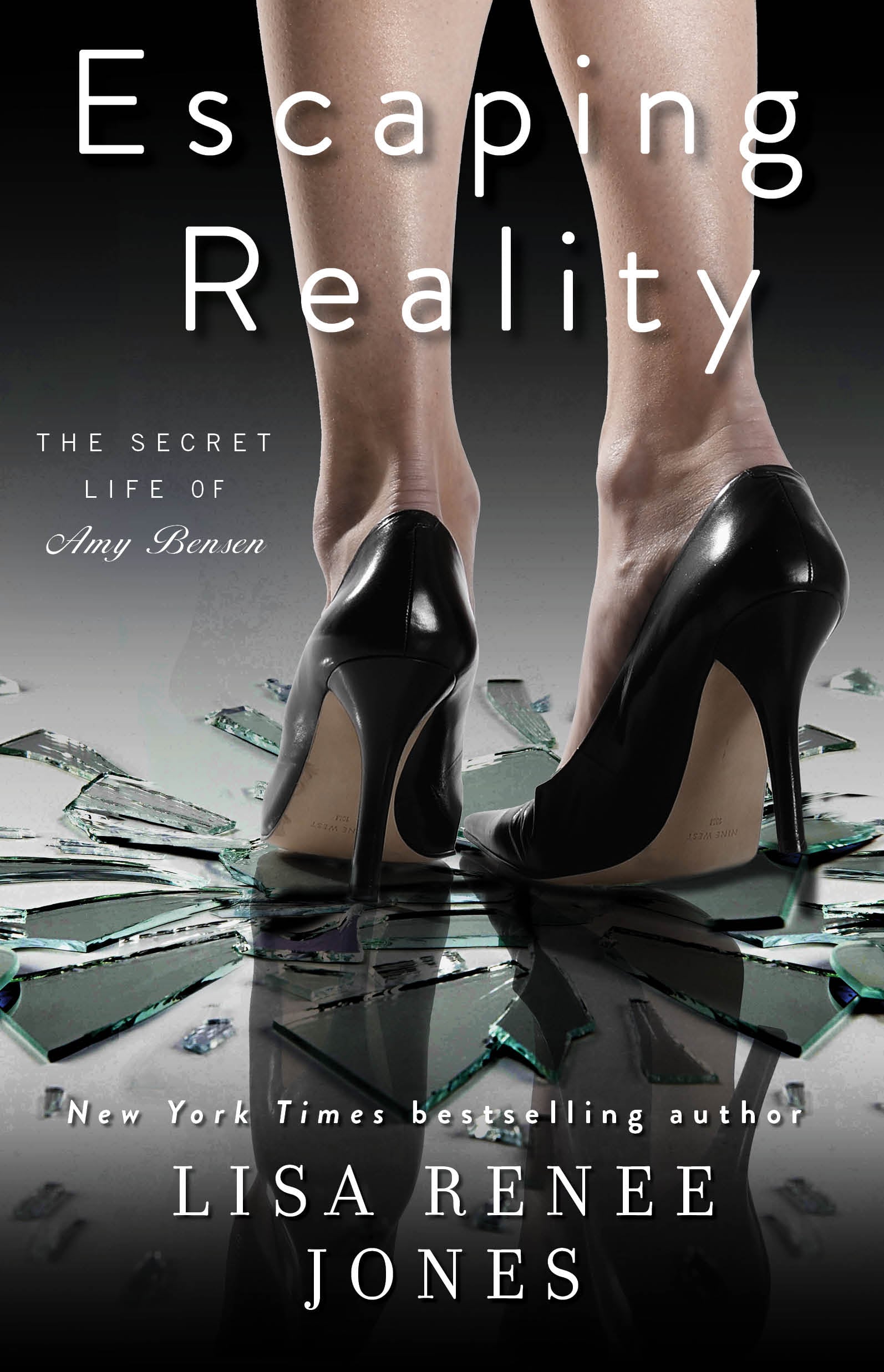 Setting the iPad aside, I press my fingers to my throbbing temples. It's almost comical that I actually thought Liam could be my handler. He has far more to occupy himself with than me, and I really don't know why he's hovering around me at this point. Well, unless he just wants to have sex. It's certainly on my mind, and maybe I should just have a one-night stand and let Liam take me away for a few hours. Whatever awaits me will still be there tomorrow. It might even stop me from melting down.

So why do I feel so let down that this thing with him isn't more? I can't have more. I went into the apartment to get rid of him, and when he comes back I should pretend I'm not here.

But when a knock sounds I jump to my feet and rush to open the door, nearly swallowing my tongue with the impact he has on me. The man does a pair of faded Levi's and a T-shirt as right as they can be done. And he does it while looking at me like I'm dinner and he's going to lick me off the plate.

"Done with your research?" he queries.

"Yes. I read your Wikipedia page."

"You're rich, talented, and why are you at my door again?" And why am I not sending you away?

"Because you haven't invited me in."

"You sure don't seem like a recluse to me."

His lips quirk and before I can blink he's advanced on me, his hands coming down on my shoulders, his big body crowding into the apartment.

My nerves prickle. "Don't do that."

He closes the door, pressing me against the wall, his powerful thighs encasing mine. "Do what, baby?"

The endearment does funny things to my stomach, and so does the solid wall of his chest beneath my fingers. "Mock me when I say your name."

"I assure you, I'm not mocking you. I told you how hot it makes me when you say my name."

I'm so not skilled at this flirtatious word game he's playing, so I resort to what I do well. "I didn't invite you in."

"No?" he asks, his eyes alight with amusement.

"No." And while I'm out of my league with a man this experienced and incredibly sexy, his playfulness takes the edge off.

"Well," he says, his voice holding a hint of mischief, "I prefer privacy when I kiss you. We recluses are like that."

My nerves shoot to the sky. He wants to kiss me. I want him to kiss me. "You're no recluse," I accuse, wondering how Wikipedia got that so very wrong.

His eyes darken, narrow. "Then how would you describe me, Amy?" he asks, and again his voice is low, gravelly. Affected by me. The idea is exciting and frightening.

"Demanding," I say, as breathlessly as I feel.

A soft groan escapes him and his hand caresses my backside, pulling my hip against his, his thick erection pressing into my belly. "I've wanted to taste you since the moment I saw you in the terminal," he murmurs, his breath a warm, wicked seduction against my mouth.

"Feel free to do it again," I whisper, with unusual boldness. But then, I've never had anyone as tantalizing as him to inspire me.

"I'm going to do a whole lot more than kiss you, baby," he promises, and his mouth covers mine, his tongue once again pressing past my lips, and I feel the lick between my thighs, in the deep throb of my sex. I've never felt desire like this, and I like it far too much to let anything interfere. This one night is for me, I think—and the thought is liberating.

He cups my face and kisses me softly, and I feel myself relax inside. This is what gets to me—the way he's so tender, yet so dominating. It works for me. He works for me. So does the way he's trailing kisses over my jaw, teasing my neck, then my ear. "Until then," he says, all velvet and seduction, "I'll be fantasizing about the moment when the only thing wrapped around me is you."

My sex clenches, slickness gathering on my bare thighs. No woman knows what she's been missing until she has a man like Liam say such wicked things to her.

He leans back, his blue stare probing, intimate. "Have you ever been bound before?"

I laugh and the sound is nervousness personified.

He doesn't laugh. His hands frame my face. "And you let me tie you up." There's a husky rasp to his voice that tells me he's affected by this realization.

His hand reaches behind me, cupping my backside, and he pulls me to him. His shaft settles between my thighs, and I soften instantly against him. "And I'm just barbaric enough to like being the first in many things."

He said something to this effect before, and it's just as arousing now. "You seem to have a bit of a liking for the word teacher."

He caresses up my back and closes his hand on the back of my head, pulling me to him, his cheek finding mine, his voice low and raspy as he murmurs, "I haven't even begun to start teaching you, Amy. We haven't even begun to go where I plan to take you." He drags his lips over my jaw and his mouth lingers a breath from mine. "You trusted me with your body by letting me bind you. I'm going to make sure you don't regret it. That's step one, baby."

His sensual purr on "baby" does funny things inside me, and his lips begin to trail over my jaw, teasing me with the promise of a kiss that I hope soon will follow. And it does. His mouth finds mine, a feather-light touch, a lick of his tongue. I moan with the barely-there, teasing taste of him.

"I like those little sounds you make," he murmurs, rewarding me with another brush of his tongue against mine.

I moan again, ultrasensitive to all that he does to me. He finally deepens the kiss, taking me to that sweet spot where only he exists. This is what I want; to be lost in him. I arch into him, craving that connection. Seeming to answer my plea, Liam moves forward, cradling me more fully on his lap, and his hands are all over me, teasing me, driving me wild. The need to touch him spirals through me and I tug at my hands, but there's no escape. There's only the growing ache of need inside me.

His lips leave mine and I reach for his mouth, only to be denied by the bindings on my wrists. "Untie me. I need to touch you."

"What are you thinking about right now?"

"The first thing that comes into your head. Don't censor it, just say it. Now. What are you thinking of now?"

"Ripping the tie off my arms."

He lowers his forehead to mine and his hands brush my breasts, tease my nipples. "And now?"

Get Escaping Reality here, and check out more great content on XOXO After Dark:

Books
12 Best YA Books of January 2021, Including the Latest From Angie Thomas
by Sabienna Bowman 2 days ago

Netflix
Have You Noticed All the Jane Austen References in Bridgerton? Here's a List
by Katy Fabrie 2 days ago