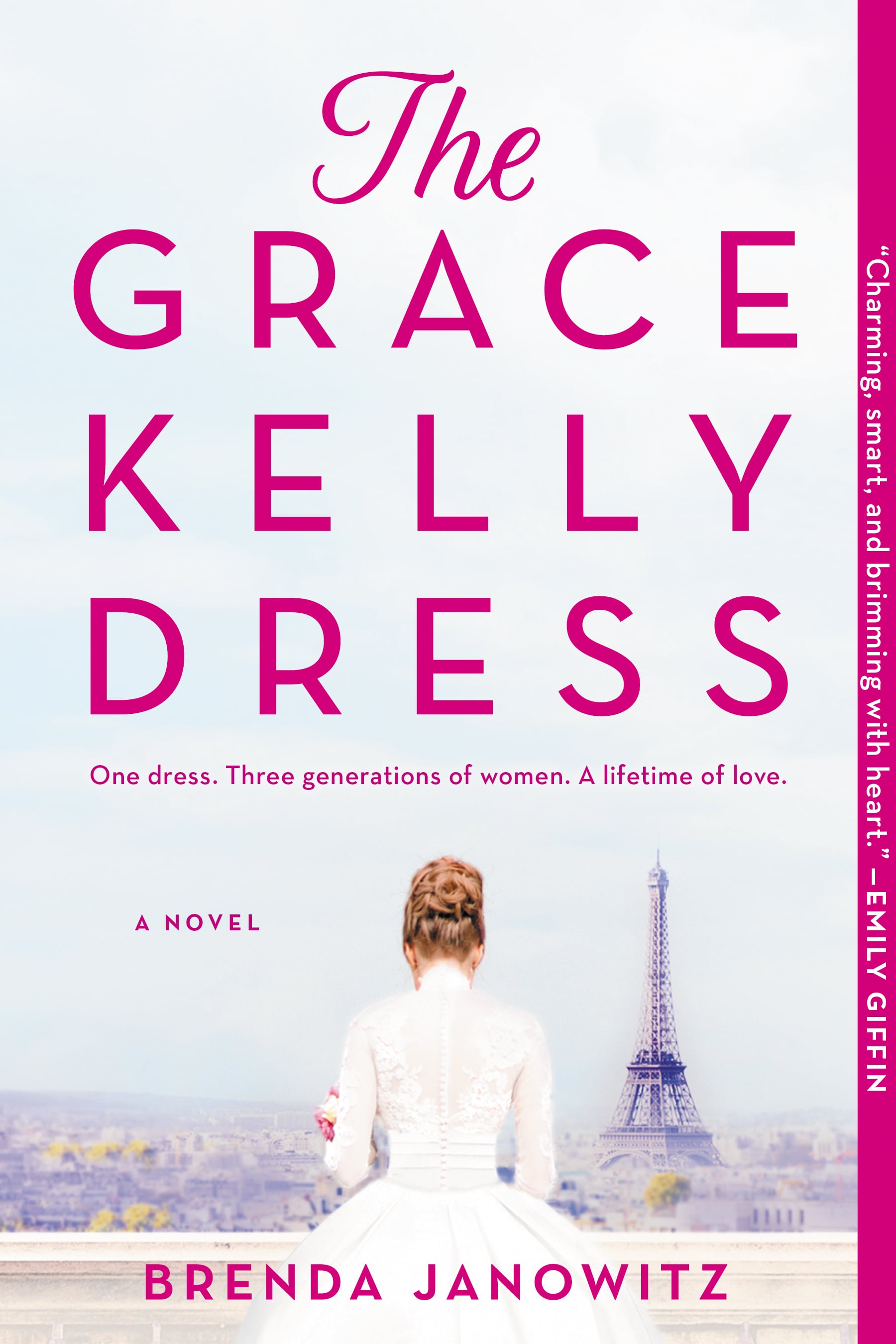 New York-based novelist Brenda Janowitz, author of The Dinner Party and Recipe For a Happy Life, is back with another page-turner, and we have an exclusive first look! In addition to being the Books Correspondent for POPSUGAR, Brenda's work has also appeared in The New York Times, USA Today, The Washington Post, Salon, Redbook, and The New York Post.

Life-affirming, heartwarming, and timeless, The Grace Kelly Dress is about the importance of tradition, new and old, and the power of a dress to fulfill even the most impossible of dreams. Here's a little more about the novel:

Paris, 1958: Rose, a seamstress at a fashionable atelier, has been entrusted with sewing a Grace Kelly-lookalike gown for a wealthy bride-to-be. But when, against better judgment, she finds herself falling in love with the bride's handsome brother, Rose must make an impossible choice — one that could put all she's worked for at risk: love, security, and of course, the dress.

Sixty years later, tech CEO Rachel, who goes by the childhood nickname "Rocky," has inherited the dress for her upcoming wedding in New York City. But there's just one problem: Rocky doesn't want to wear it. A family heirloom dating back to the 1950s, the dress just isn't her. Rocky knows this admission will break her mother Joan's heart. But what she doesn't know is why Joan insists on the dress — or the heartbreaking secret that changed her mother's life decades before, as she herself prepared to wear it.

As the lives of these three women come together in surprising ways, the revelation of the dress's history collides with long-buried family heartaches. And in the lead-up to Rocky's wedding, they'll have to confront the past before they can embrace the beautiful possibilities of the future.

The excerpt below is set in 1982 in Long Island, New York. The mother of the seamstress is trying on her mother's Grace Kelly replica dress in anticipation of her own upcoming wedding.

The mother of the bride, as a bride herself
Long Island, 1982

She loved the dress. She loved the veil that went with it, too, though she wasn't sure if it could be salvaged. It was showing signs of age, its edges curling and tinged with brown. But that wouldn't dull her excitement.

Today was the day she would be trying on her mother's wedding dress. Even though Joanie had tried it on countless times as a child — it was a favorite rainy-day activity with her mother — today felt different. She was engaged, just like she'd dreamed about ever since she could remember. When she tried the dress on this time, it was for keeps. She was completely in love with the dress.

"Let me help you get it on," Joanie's mother said, her French accent coming through. It was always more pronounced when she was feeling emotional. With her American friends, Joanie noticed, her mother always tried to sound "American," softening her accent and using American expressions. But when they were alone, she could be herself. Let her guard down. Joanie knew exactly who her mother was, and she loved her for it.

Her mother handed Joanie a pair of white cotton gloves and then put on her own set. The first step in trying the dress on, always, so that the oils in their hands wouldn't defile the fabric. She laid the large box on her bed and nodded her head at her husband, her signal to give them privacy. The door closed to Joanie's childhood bedroom, and she and her mother were alone.

The white cotton gloves were cool and smooth on her skin. Joanie opened the box slowly. So slowly. It was sealed with a special plastic that was supposed to keep it airtight so that the dress would not oxidize and turn yellow. She and her mother laughed as they struggled to set the dress free. The last time she tried the dress on was the summer before her sister died. It was after Michele's death that her mother brought the dress into the city so that it might be cleaned properly and preserved for just this day. At the time, Joanie hadn't understood the connection between her sister's sudden death and her mother's tight grip on family heirlooms, but now, a year into her psychology degree at NYC University, she understood. It was so hard to hold on to things that were important to you, things that mattered, and preserving her wedding dress, this memory, was her mother's way of taking control of something. It was something she could save.

The dress was just as beautiful as she'd remembered. Crafted from rose point lace, the same lace used on Grace Kelly's iconic wedding dress, it was delicate and classic and chic and a million other things Joanie couldn't even articulate.

"Go on," her mother said, holding the first part of the dress — the bodice with the attached underbodice, skirt support, and slip — out for her to take. As a child, it had thrilled Joanie to no end that the wedding dress her mother wore was actually made up of four separate pieces. It was like a secret that a bride could have on her special day, something that no one else knew.

"I couldn't," Joanie said, hands at her side. Knowing how carefully preserved the dress had been, what the dress had meant to her mother, it was hard for Joanie to touch it. She didn't want to get it dirty, sully its memory. "It's just so beautiful."

"It's yours now," her mother said, smiling warmly. "The dress belongs to you. Put it on."

Joanie kicked off her ballerina flats, and her mother helped her ease the bodice on. Joanie stood at attention as her mother snapped the skirt into place, and wrapped the cummerbund around her waist. Joanie held her hands high above her head, not wanting to get in the way of her mother's expert hands, hands that knew exactly where to go, fingers that knew exactly what to do.

"You ready in there, Birdie?" her father yelled from the hallway, impatient, his French accent just as strong as the day he left France. Joanie always loved how her father had a special nickname for her mother. When they first married, he would call her mother GracieBird, a nickname of Grace Kelly's, because of the Grace Kelly-inspired wedding gown she wore on their wedding day. Eventually, it was shortened to Bird, and then over time, it became Birdie. What would Joanie's fiancé call her?

Joanie inspected her reflection in the mirror. Her shoulder-length blond hair, recently permed, looked messy. Her pink eye shadow, which had always seemed so grown-up on her sister, made her appear tired and puffy-eyed. But the dress? The dress was perfect.

Her mother opened the door slowly, and her father's face came into view. His expression softened as he saw his daughter in the wedding dress. She walked out into the hallway, towards him, and she could see a tear forming in the corner of his eye.

She turned to her mother, about to tell her that Daddy was crying, when she saw that her mother, too, had teared up. Joanie couldn't help it — seeing her mother and father cry, she began to cry as well. She could never keep a dry eye when someone else was crying, least of all her parents, ex-pats from Europe who hardly ever cried.

"And look at us," her mother said, her hands reaching out and grabbing for her husband and daughter. "All of us crying like little babies."

All three embraced — carefully, of course, so as not to ruin the dress.

Her father kissed the top of her head. "Give us a twirl."

Joanie obliged. The dress moved gracefully as she spun. Joanie curtsied, and her father gently took her hand and kissed it.

"I know what you're thinking," her mother said, her voice a song.

"What?" Joanie asked absentmindedly, while staring at her reflection in the mirror. She knew the first thing she'd change — the sleeves. The dress needed big, voluminous sleeves, just like Princess Diana had worn on her wedding day.

"Or I should say who you're thinking about," her mother said, a gentle tease.

"Who?" Joanie asked, under her breath, twirling from side to side in front of the mirror, watching the dress move.

"Your fiancé," her mother said, furrowing her brow. "Remember him?"

"For sure," Joanie said, spinning around to face her mother. "My fiancé. Yes. I knew that. And, yes. I was." But the truth was, she had completely forgotten.

Books
Around The Web