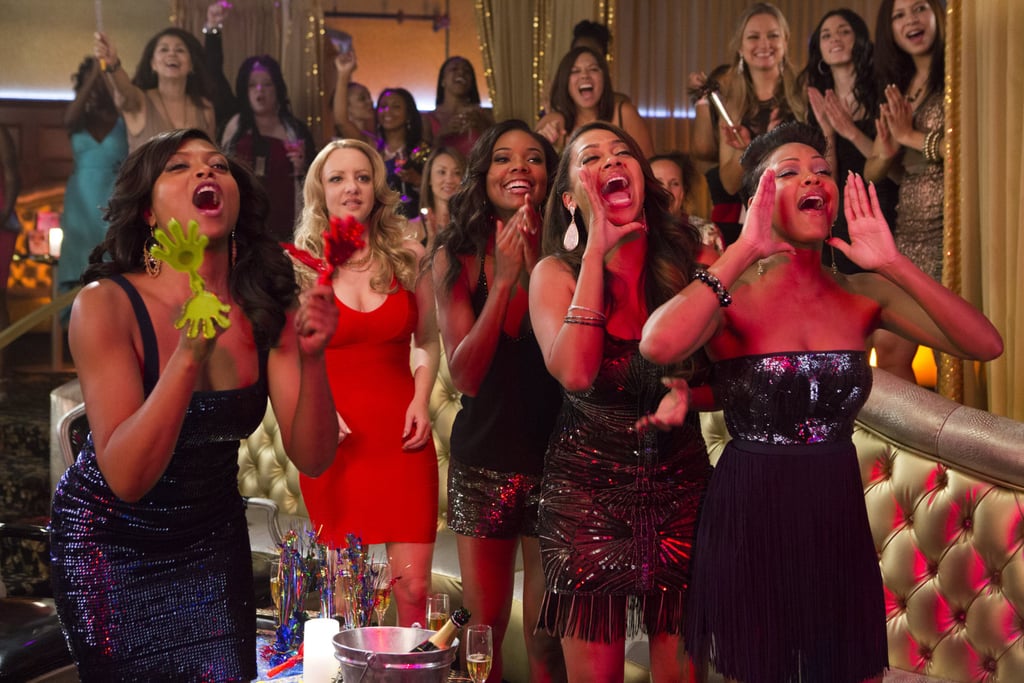 Who doesn't love going to a gay bar? Gay bars are fun and great and wonderful — but when a gaggle of bridesmaids ready to party in some penis hats walk in, things can get tricky. Because try as some might to reduce these spaces to unnecessary drinking venues, gay bars are important political zones where pride thrives. As the Pulse tragedy has pointed out, gay bars are historically safe spaces for LGBTQ persons to be themselves in a nonjudgmental environment.

That's exactly why the vibe of a gay bar can get tense when a group like a bachelorette party enters, en masse, claiming the space for their own. As gay comedian Drew Droege wonderfully explained, it can turn not cute, fast. Why? Because the history of our spaces gets rewritten by straight people and it just feels wrong. Look: it's always great to have straight or cisgender people at gay bars or in queer spaces. I love that we can come together to celebrate each other! So, I'm definitely not saying that you shouldn't have a bachelorette party at a gay bar. It's just that, if you do, you should be sensitive to the space. And how can that be achieved? Here are five pieces of advice to help you fit in fine.

1. Bring a queer friend with you (but don't force a queer acquaintance).

There's a reason people traveling to other countries employ a tour guide: the same can be said of bringing along a queer cultural mediator. By including a close LGBTQ friend in your party, you illustrate to others in a gay bar that, yes, you have been vouched for, and you are cool with us. This person will guide you and should be an integral part of your night because of their friendship and expertise. But if you don't have a close queer friend? Go it alone: don't force someone you barely know who is gay or lesbian, etc. to "be your gay." That will be uncomfortable for everyone — plus your person will probably bail as you've abused the relationship just to gain "authenticity."

2. You might be queen for a day — but this ain't your queendom!

This is important and has been written about again and again and again: just because you are a bachelorette party does not mean you own the space. This can be said of any bar your party rolls into, but it is especially true at gay bars, where the party around you was designed without you in mind. When a bachelorette party enters, there is a power shift. People get defensive and claim their territory, so, when you try to demand music and drinks and dancing, the response you will get might literally be the boot.

To avoid the boot, do as queers do and break the cultural rules that bind: try being a subtle bachelorette party! Forgo the crowns and sashes and penis party favors in lieu of regular clothing and cocktails. Being dressed up in bachelorette gear radiates pheromones. It screams that you are at a gay bar for a Disney-esque experience, or to gawk at the crowd like they're animals in a zoo — and no one wants that. As Dan Savage Tweeted a few years back, bachelorette parties are a form of straight pride. Remember: most people at gay bars weren't even legally allowed to wed until very recently. The more you keep that in mind, the better.

Every gay bar is different. Some will welcome you, others will begrudgingly allow access, and some will exercise their policy against bachelorette parties — a policy West Hollywood's The Abbey famously instated. To avoid this, call ahead and find out a bar's deal. The venue and the clientele will appreciate the respect and you might get some insider information. For example: is it a theme night? Do I need to bring anything? Are there acceptable women's restrooms? These are things to know before you arrive because — if it is a combination leather night/drag show and the women's room is a toilet without a door, you probably want to know so you can wear leather, grab a wad of dollars, and pee before you arrive.

Regardless of the who or the what or the why, a group of straight women at a gay bar will never not stick out. And, be it by a drag queen or a snappy bartender, you will get razzed for being you. Why? That's how gay culture is: we invented shade and reading to cope with being made fun of our entire lives! It's how we communicate — and you are not excused from the fun because you are straight and cisgender.

If you want to throw away this advice, that's cool. I will leave you with this, though: when entering a gay bar, you are in the minority and are representatives for the straight community. When we LGBTQ people leave our homes and safe spaces, we carry the baggage of representing our community. As Dave Holmes said, "We have all needed to read the room, to think about how we present ourselves to the world."

This, friends, is what it feels like to be different based on your sexuality. Don't let your people down.