National bestselling author Karin Tabke has a special holiday treat in store for readers: the Hot Cop Box Set, the first three installments in her sizzling Hot Cop series packaged together. In Jaded, cynical detective Jase Vaughn meets his match in Jade Deveraux, the sultry proprietress of a high-end gentleman's club. And in Skin, feisty Francesca Donatello needs the sexiest man on the planet to launch her magazine — and undercover cop Reese Bronson proves just the thing. These are men in uniform like you've never seen them before . . . 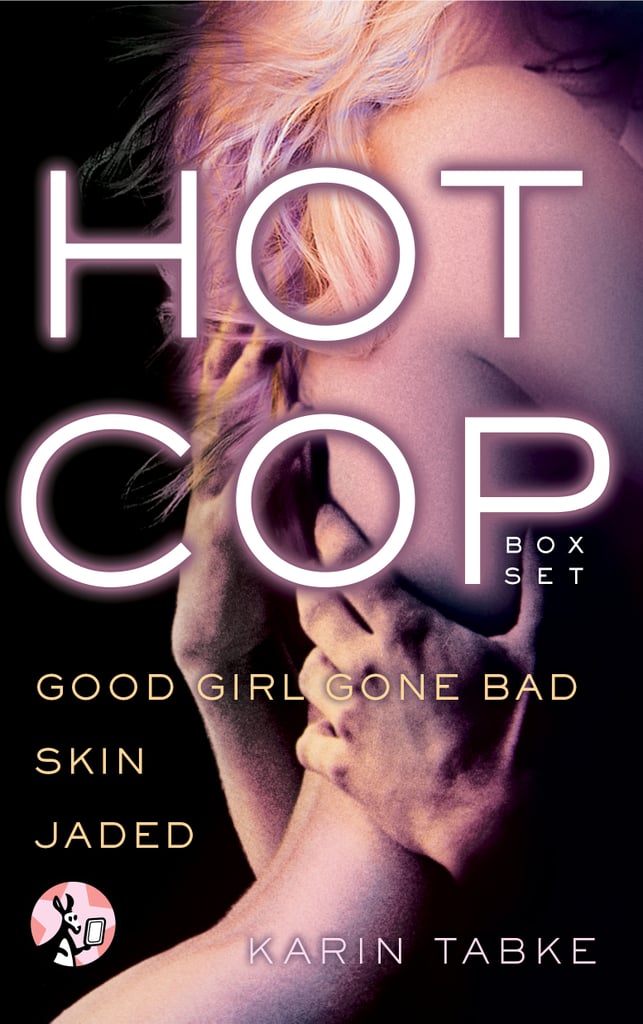 "Well, Detective, did you dig up all of our dirty little secrets?"

Jase stood to his full height. In her strappy high heels, she stood almost nose to nose with him. She smiled and cocked her head to the side. In a fluid sweeping gesture she pushed her wave of black hair behind her shoulders. "What are you thinking, Detective?"

Jase grinned wider. "I was just thinking how good those heels would feel digging into my back."

He had to hand it to her. She didn't flinch. She was a cool one. Instead, she trailed a fingertip down the front of his fitted black shirt and pressed close to him. The tips of her breasts brushed ever so lightly against the linen of his shirt. The contact sent a shot of blood to his dick. He curbed the impulse to slip his arm around her waist and draw her closer to him. Not to ravish, but to savor. She smelled so damn hot, and her skin he knew was on the searing side of warm. He bet she would melt beneath him.

"Detective, isn't it inappropriate for a police officer to proposition a suspect?"

He leaned in closer, and her nipples dug into his chest. "I never said you were a suspect."

"No, you didn't, but I can see the wheels turning in that cop head of yours." She reached up on her tiptoes and pressed her face close to his. In a quick move, she nipped at his bottom lip. "It's too bad, Officer."

When she retreated, Jase's hand slid around her waist, just as he had wanted to do moments before. Her body stiffened. He yanked her against him. "If you can dish it out, my little prick tease, be prepared for some payback." He swept his lips across hers in a hard kiss before letting her go. She grabbed the chairback next to her. Her wide eyes spoke the truth. He'd shocked her. He grinned, and swept her with a hot gaze, his eyes settling on her hard nipples. He'd stake his retirement it had been a long time since she'd had a man. His body heated up at the prospect of being the one to tune her up. But caution cooled his blood.

She was, at this juncture of his investigation, shaping up to be his prime suspect.

Not to be denied the stellar hot shots she knew she could get, Frankie reached up to the top of the doorjamb and felt for the key. Dismayed when she didn't find one, she checked every jamb in the condo and came up empty. Had he removed them, suspecting she might try to get in? Or God forbid, had he caught a case of shyness? Refusing to believe that, and more determined than ever, she dug through her purse for a bobby pin. Instead she found a large paper clip. It would do. She pulled it straight and inserted it into the small hole in the knob. It clicked and she smiled triumphantly, turning the knob.

She opened the door to the hot, steamy bathroom, the thick air swirling around her. The semi-steamed shower doors did little to hide the man on the other side. What she saw set her body on fire.

With his head back and his eyes closed, ever so slowly his big hands rubbed the creamy lather across his chest, moving slightly upward as he slid across his pecs. His dark brown nipples hardened beneath the soft friction. His hand slid lower, across the hard tautness of his belly. Steadying her breath, Frankie raised her camera.

Reese's hand slid down to his burgeoning cock. His body flinched when he wrapped those long fingers of his around the thick shaft. His chest expanded when he caught his breath. Frankie's own breath echoed in her ear. In a slow, rhythmic slide he began to pump.

A heaviness filled Frankie's body, blood rushing to fill every capillary she possessed. Her hips rocked in silent approval with his. When his back arched, her back arched. Frankie bit her bottom lip and held back a cry of pleasure. For the first time in her life she understood what "in heat" actually felt like.

Her legs felt like waterlogged sacks of sand, making it hard for her to take a step closer. The sound of the pulsing water covered the low click of her camera. He was turned slightly away from her, unable to see her taking shots of him—unless he turned around. She gave no thought of being caught. All that mattered was the shot.

She watched, through her lens, spellbound as his hand pumped faster. Her heart rate accelerated and she licked her lips; her hips keeping their own subtle cadence. He was truly a magnificent specimen of a man. She'd been a fool to have considered another model.
Pressure built at the apex of her thighs.

His hoarse voice called out her name. Frankie gasped, unable to keep the sound from escaping. Her hips jolted simultaneously. Heat flashed across her skin. Her blood vessels opened and filled. Her body throbbed.

If she didn't get out of there, she'd break her cardinal rule.