From New York Times bestselling author Alice Clayton comes this Cocktail series novella. Simon and Caroline are back for another round of baking, banging, and big life changes. As they watch their best friends Mimi and Ryan tie the knot and Sophia and Neal get ready to bring a little one into the world, Simon and Caroline suddenly find themselves thinking about their future — possibly as Mr. and Mrs. Wallbanger and Pink Nightie Girl. Read two sexy excerpts from Last Call before its release on Jan. 6!

For more on this sexy romance novella, visit XOXO After Dark! 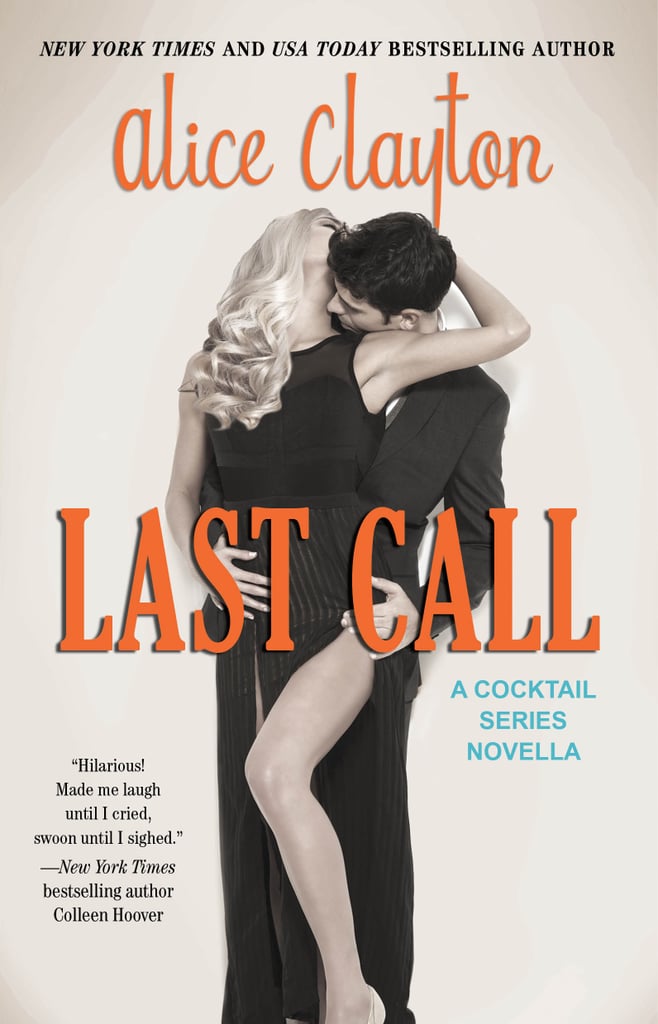 "Have you ever watched waves and wondered, what if one wave wanted to go in another direction?"

"Watched waves, yes. Thought about assigning intelligent thought to waves? Nope. Can't say that I have." He looked more closely at me. "But now I'm curious. What thoughts do you think these waves are having?"

"It's not the waves, per se. Just . . . the idea that they have no choice. They have their path, and that's it. All roads lead to the beach."

"What a terrible road," he teased, and I socked him.

"You asked for my thoughts; these are my thoughts. I didn't say they made any sense—they hadn't gotten to that point yet," I said, and he held me closer.

"The panic on your face when you thought someone was asking about us getting married. Now you're out here worrying about waves making different choices. Not that hard a leap to make. It's not like I just met you, you know."

I could feel him smiling against my neck, and if it was possible for me to hold him tighter, I wasn't aware of it.

"What if I were the one asking it?"

"Wait . . . what?" I asked, lifting my chin and looking up at him. In the moonlight, his eyes were the deepest blue, and fixed solidly on me. Studying me, looking for a reaction. "You're not asking me to—"

"I'm not panicking. I'm perfectly calm," I answered, then showed him my best facial tic.

"You're asking me how I feel about marriage in general, or marriage with someone specific in mind?"

I leaned back to look at him, his hands still on my waist. "I think marriage in the general sense is something I'm in favor of. I also think there's something to be said for the saying 'if it ain't broke, don't fix it.' It seems to be working for Chloe and Lucas. On the other hand," I said, sliding my hands up his arms to link behind his neck, "I think marriage with someone specific in mind is also something I'm in favor of—although it would depend on who the someone specific is, of course. Is there a candidate?"

"Possibly," he answered, beginning to slowly reel me back in closer to his chest. "Very possibly."

"Is he tall? Witty? Charming? Impossibly good looking?" I asked.

"Yes. All of those things." He nodded, looking very serious.

I smothered a laugh, rising on tiptoe to press a very loud kiss just below his ear. "You tell this potential fiancé of mine that if he wants my real answer, he has to ask to the real question. Until then, this is all chitchat on a balcony. And I've had enough chitchat for one evening."

"How about sex on a balcony?"

"See, now that sounds more like it." I grinned as his hands slid down my back and around my bottom, pressing me into his hips. As his lips met mine, slow and unhurried, I thought about kissing this specific man for the rest of my life. How could anything possibly be better than this? Simon and me, about to be naked and sexy—could anything top this?

And then I had a vision of this moment happening sometime in the future, but instead of Simon unbuttoning my shirt, he was untying my corset. And instead of sliding my jeans down, he was slipping a blue lacy garter down my thigh. And instead of calling me Nightie Girl as he licked a path from my belly button south, he called me wife.

If he was at all surprised by how aggressive I was with him on the balcony, he didn't let on. He simply enjoyed it. Twice. Three times . . .

"I'm getting in the shower, babe, if you want to join me. You know, for conservation's sake only. No ulterior motive at all." I laughed silently to myself as I heard his steps quicken, and I slipped in before he got to the bathroom. I stood under the spray, eyes closed, letting the warm water sweep down over my tired muscles. I heard him enter the room, heard the sound of his shoes kicking off, heard the sound of his belt buckle jingling, heard the slide of denim moving down down down and then hitting the floor. I heard the shower door creak open on the other side of the steam and I smiled underneath the spray, raising my hands to my hair and arching backward in a very specific way. I was tired, sure. But I was never too tired for his hands and his mouth and his everything else he had to offer. So I arched. And waited. And arched some more. And still, waited. I peeked out from underneath the water, and he stood there. His eyes poured over my skin, his mouth set . . . and tense.

"Babe?" I asked, leaning forward to wrap my hands around the back of his neck, just as his hands slipped around my waist, fingers digging into my skin. "You okay?"

Water poured down over both of us, wetting his skin, sliding against mine as the steam created a little puffy cloud of our very own. The shower disappeared, the world disappeared, and in the middle of that world it was just me and my Simon. His lips parted, one stream of water trickling down, wetting his lips and making them irresistible to mine. But before I could bring my mouth to his, he spoke.

A statement. Not a question. It came again.

"Marry. Me." His eyes burned into mine.

I breathed in, my ears ringing. My pulse sped up, my heart raced, I was trying to remember exactly what breathing meant. I was wet, and I was gasping.

"I want you. I want that, what they had today. I want it all, and I want it with you. I want you, want you to be my wife. I've got a ring, I'll give it to you right now if you'll say yes." With every word, his hands tightened on my hips, desperate, crazy, longing. "I had this all planned out, so much smoother and romantic and everything you deserve. But my head's been spinning since yesterday, when I saw my best friend steal a van to go meet his new family. And all I want, all I've ever wanted, is exactly that. Exactly you. And when I walked up those stairs, and heard the shower go on, and knew you were in here all naked and wet and waiting for me, I knew I couldn't wait another day, another hour, another minute, without asking you to be my wife. So. Marry. Me."

He knelt. Christ on a crutch, he knelt on the shower floor, where he had knelt countless times before . . . ahem . . . took my hand, and repeated those words again. Finally, with a question mark at the end.

And in that moment, I realized all the worrying, all the hand wringing and wonder ponder, all the thoughts about who says what's right for a couple, and when is it too soon, and when is it the right time, and if it ain't broke don't blah blah blah. F*ck all that noise. It wasn't about what was right for other couples, it was about what was right for us. Simon and me. Because when Wallbanger kneels down and asks you to be his wife, it's not really something you need to think too long on.

Funny thing about getting proposed to in a shower. You can't tell which is water and which is tears.

Sometime later, he carried me to our bed, took a ring from his bedside table, and slid it onto the fourth finger of my left hand. It was shiny and sparkly and perfect and beautiful and looked amazing when I was clutching his backside as he pressed into me again.

"Believe it, babe," he murmured, rolling us both so that I was perched on top of him.

"Wrong." He sat up underneath me, driving deeper into my body. "I'm the lucky one." I gasped, he groaned, and my hips went wild.

Yeah, I got rolled over for that one.

Sex
I Lost My Mom 2 Years Ago, and My Grief Killed My Sex Drive
by Adele Stewart 1 week ago