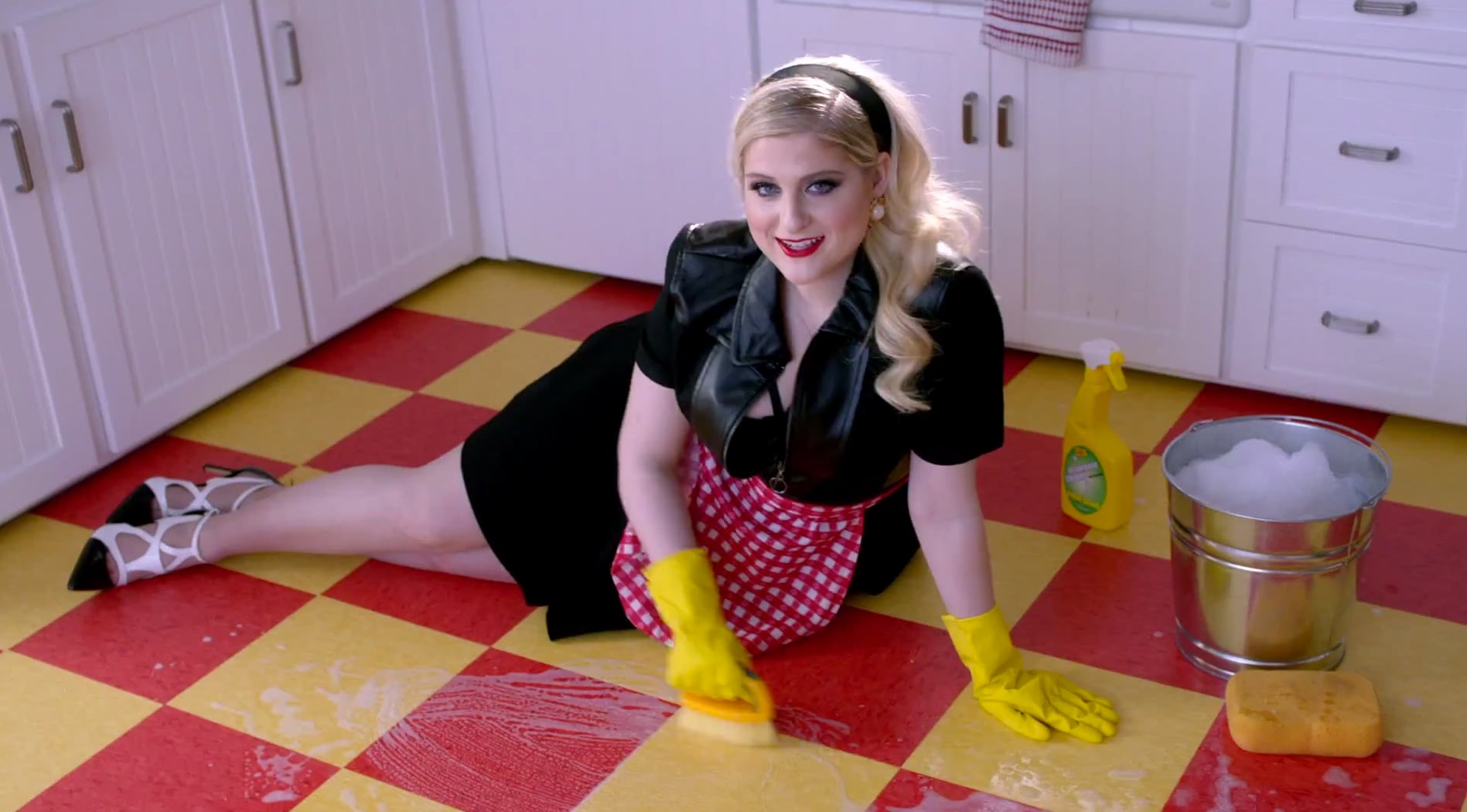 Meghan Trainor has some views on marriage that are causing us to raise our brows. In the new video "Dear Future Husband," the singer wears her tried-and-true retro garb to croon lyrics about what she expects her suitors to do for her. In addition to buying her a ring, Trainor has specific expectations for men that are making us cringe.

Don't get us wrong, we love her body-positivity anthem "All About That Bass." There's also a smattering of progressive lyrics in the song — "You got that 9 to 5, but, baby, so do I. So don't be thinking I'll be home and baking apple pies." A spark of female individuality is present, but for the majority of the track, the ideas behind Trainor's words don't feel right. Check out our breakdown of a few lyrics from Trainor's latest single.

"Take me on a date, I deserve it, babe. And don't forget the flowers every anniversary."

Don't boss your significant other around. If you "deserve" a date, he'll probably know that without your reminder. This set of lyrics is just encouraging the "demanding wife" stereotype that women don't deserve nor enjoy being called.

"You gotta know how to treat me like a lady, even when I'm acting crazy."

Again, another female stereotype is being projected — the crazy girl.

"Cause if you'll treat me right, I'll be the perfect wife. Buying groceries, buy-buying what you need."

Being the perfect wife means buying groceries and anything else your husband needs? Maybe that was common thought in the '50s, but it's 2015. We're hoping men don't judge women based on their food-purchasing abilities. Let's talk about our careers and talents instead. Swiping a credit card at Safeway doesn't count.

"Open doors for me and you might get some kisses."

So affection will only be given if chivalrous acts are constantly shelled out? We're all about acts of kindness, but sometimes a guy deserves some love just because, well, you love him.

"After every fight just apologize and maybe then I'll let you try and rock my body right. Even if I was wrong, you know I'm never wrong."

C'mon, Meghan, you're never wrong? Nobody is never wrong. Stand up for what you believe in, but don't be so out of touch that you can't see when you've made a mistake. Not OK.

"Don't have a dirty mind, just be a classy guy."

So now guys aren't allowed to think about sex?

"Make time for me, don't leave me lonely and know we'll never see your family more than mine."

Yikes, looks like Meghan won't be making much time for her in-laws. A relationship is an equal partnership — you have to show your significant other that you care about his life too. Otherwise, it's a dictatorship, not a marriage.

Listen to "Dear Future Husband" for yourself, and let us know what you think about Trainor's latest release.

Meghan TrainorRelationshipsMusicDatingAdvice
Around The Web

Music
Jesse McCartney, an Un-Masked Singer, Celebrates His Friends From Afar With New Bop
by Karenna Meredith 1 day ago

Music
Praise the Pop Gods: Lady Gaga and Ariana Grande's "Rain on Me" Is the Club Anthem of 2021
by Mekishana Pierre 10 hours ago

Netflix
Wondering What Songs You're Hearing on Sweet Magnolias? Let Us Help With That, Honey
by Amanda Prahl 1 day ago

Music
Sech's New Album, 1 of 1, Promises to Maintain His Status as King of Digital Charts
by Maria G. Valdez 3 days ago