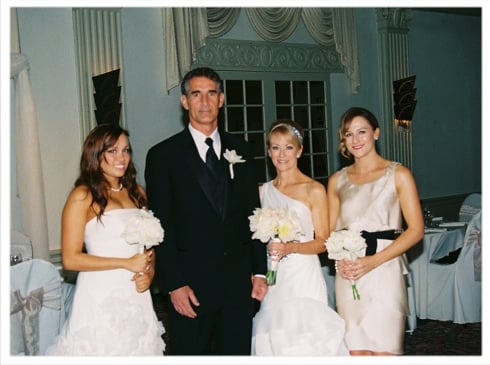 I was home with my boyfriend on Christmas Eve when I got the text. "Call me!!!" A picture of a diamond ring, stunning even via camera phone, promptly followed. My mother was getting married.

At 26, I'd been with my boyfriend, Martin, for seven years, and had no intention of marrying him. (I was a lucky girl; he didn't want to marry me either!) I was cheerfully antimarriage for several reasons. Partly because I had no desire to have children; partly because I felt too unsettled in my career and student-loan leveraged for such an adult move; and mostly because I preferred the bohemian romanticism of a decades-long affair to the practical, state-sanctioned idea of a spouse. You know, like Susan Sarandon and Tim Robbins. Before they broke up.

I'd long assumed my mother shared a similar philosophy, so I felt surprised, and maybe slightly betrayed, by her all-consuming enthusiasm over the proposal. After the engagement, she mentioned that planning her wedding would be "good practice" for mine. What wedding? I wanted to ask.

Nonetheless, I was genuinely excited about my mom's nuptials. Her fiancé, Ray, was a kind, handsome guy, and despite a disinterest in having one of my own, I've always loved other people's weddings. They're thrilling, emotional, and have open bars.

Then there's The Dress. My mom solicited my help finding hers. But what I thought would be a passing glance at VeraWang.com spiraled out of control. Soon, I was comparing fonts for wedding invitations then googling pictures of bouquets that struck the tasteful but bold balance of peonies to roses we absolutely needed to procure.

"It's so easy to get sucked into the vortex of wedding options!" I tweeted while browsing NeimanMarcus.com's bridal shoe collection. Within minutes, I was fielding a flurry of ecstatic responses, like "OMG no way did you get engaged?!!?" It was an outpouring of excitement and attention that nothing else I had written — or even accomplished — had ever sparked. I hesitated for a moment before informing everyone that my mom was the one getting married. Not me.

I thought my friends knew better. I'd always been open about my lack of interest in marriage. Was it impossible to believe that, if presented with a ring by a terrific guy, no girl — not even me — could resist saying yes? The thought that there was something defective about my feelings toward love lingered long after I left the computer.

Before the rehearsal dinner, I steeled myself for inevitable questions from well-meaning friends and family who'd ask again when we'd finally tie the knot and have kids. I always tried answering gracefully but briefly, with a stiff smile designed to elicit zero follow-up queries.

That night, my younger cousin arrived with her infant daughter and husband. She'd gotten married quickly after the baby news and had no qualms admitting her daughter was a surprise — albeit a very happy one.

"Are you guys next?" she asked.

Was I wrong not to want what everyone else naturally seemed to?

Back at the hotel, a primal self-doubt clawed at me.

"I hope you know how lucky you are," I said to Martin as we got ready for bed. "I don't want to get married. I don't want kids. I don't even care if we have a dog!"

I could see him gauging the right response to my strange behavior as I teared up.

Martin's saving grace in our relationship is his panic-free disposition, which exists in stark contrast to my erratic, overly emotional one. He reassured me I wasn't deeply and irrevocably screwed up. After all, he pointed out, we'd lasted longer than many marriages; "you're clearly no commitment-phobe."

As I sat down to write my toast the next morning, groggy from my tear-soaked crisis of confidence, I felt an undertow of panic. Who was I to say anything about marriage?

Then I thought about the first postengagement visit I'd paid to my mom and Ray. At dinner one night, he and I got into a heated argument about the difference between sea salt and table salt. (Really.) The standoff escalated. I threw my napkin on the table and left. Later, he stopped by my room to apologize.

At the wedding, after my mother had walked down the aisle in her killer Vera Wang gown, after my younger sister sang "At Last," and after everyone sat down for dinner, I took the microphone.

"Mahatma Gandhi said: 'A coward is incapable of exhibiting love; it is the prerogative of the brave,'" I read. "When I was writing my toast, this quote came to mind, because it doesn't shy away from the truth. Loving someone, and showing that person how much you do, does require risk. But when you have wisdom and strength to match your daring, you are sometimes lucky enough to find someone who doesn't require you to put your heart in danger or your future at stake. Instead, their love gives you a safe place; a haven, peace, room to grow. Here's to my mom and Ray, two of the bravest people that I know."

My own romantic relationship may not have been what society at large expected. But as I read those words and Champagne flutes clinked in solidarity, I knew my mom and Ray — and Martin and I — perfectly fit the description of love I'd tried capturing.

Later, as we watched the newlyweds cut loose to a Katy Perry song, I leaned in conspiratorially to Martin and whispered: "Guess what? I still don't want to marry you." He laughed and squeezed my shoulder.

I may not have wanted a wedding, but this was absolutely the wedding I wanted for my mother.