Still traumatized from witnessing her father's murder 15 years ago, Kat Lane decides to face her fears and uphold his legacy of helping others by tutoring inmates at a New York prison. But she didn't expect to teach Wesley Carter, the sexy and arrogant inmate who constantly wreaks havoc on her patience. And her hormones. As Kat slowly chips away at his hard exterior, she realizes he's a good man, not the dangerous criminal he pretends to be. As undeniably attracted as they are to one another, there are two truths that Kat can't deny: it would be career suicide if she dated a student, and her family would never approve of Carter and his shady reputation. With the obstacles in their way, and with Carter keeping secrets that threaten to break them apart, does their relationship have a fighting chance in A Pound of Flesh? For more on this sultry novel, visit XOXO After Dark! 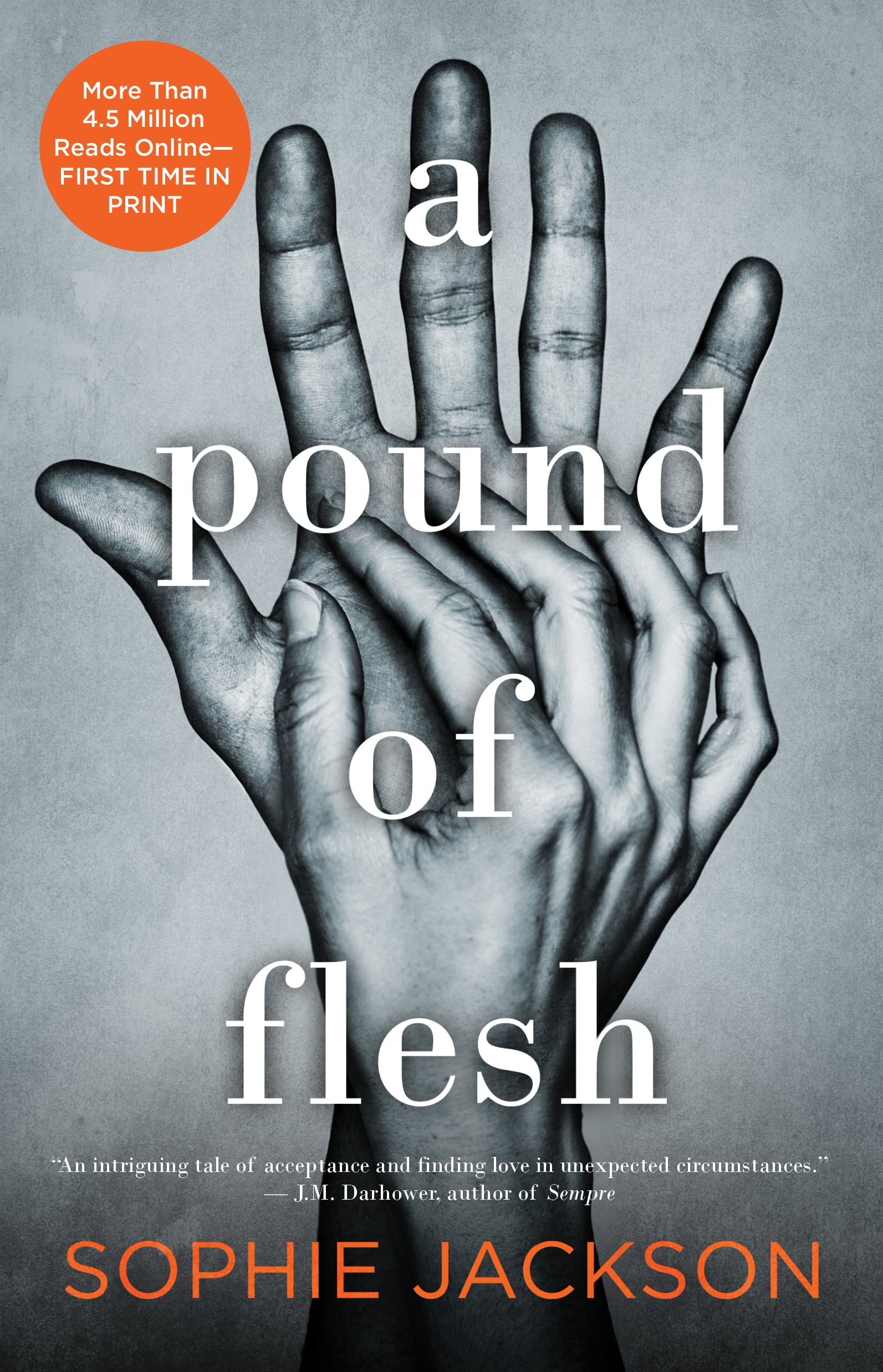 Kat saw the tension creep back into his jaw. The truth was, she barely knew the man sitting before her, and it was cause for concern. She was lusting after him, yet all she knew for sure was that he'd done time, he had a good education, and he worked in a body shop with his best friend. The fact that he made smoking look sexy as all hell and looked f*cking amazing in jeans and Ray-Bans was inconsequential.

"I see you came straight from work again," she noted with a tip of her head toward his red White Stripes T-shirt smothered in oil.

"Yeah, I get covered in the stuff." He glanced at her from under his lashes, his gaze like a hot finger pressed to her skin. "Sorry for being late." He rubbed his hands down his face. "Christ, I need a cigarette."

Kat stood, scraping her chair across the linoleum floor. "If you need a smoke, let's go outside and have a smoke."

Kat put her hands on her hips and took two steps toward the door. "I like to watch," she sassed. "Come on."

Carter watched her for a moment, then followed. Outside of the library, in the warm sunshine, they went to the smoking area.

She gestured with her hand for him to spark up. He smiled and did as she suggested, pulling on the thing for all it was worth. Leaning back against the wall, he caught a waft of her perfume, and closed his eyes briefly at the sweetness of it.

The top of her head only came to his shoulder; how had he not noticed that before? Maybe it was because her confidence, her no-bullsh*t attitude, made her seem taller. Her hair caught the sun, causing the red and gold to shine. His desire for her grew exponentially every time he saw her and, as he watched her gaze out at the traffic, the stirring she always caused began deep in his stomach.

"Why did you want to become a teacher?" he asked, needing a distraction from his rising libido.

Her head snapped toward him, her big green eyes wary.

"Sorry," he mumbled around his cigarette. "I didn't mean to pry. It's none of my business." He stared at his feet until she answered.

"My dad. Before he died, I made a promise to him." She lifted her face toward the sky. "He always taught me that it was important to give back, to not take anything for granted. I loved reading and writing, and becoming a teacher just seemed to . . . ignite something in me." She glanced at him. "Sounds corny as sh*t, right?"

He shook his head. "There's nothing wrong with passion, Peaches."

"Did you want to be anything, before prison?"

Carter crossed his legs at the ankles. "There was a time when I wanted to be a doctor." He'd never told anyone that.

"Yeah, a surgeon, actually. Don't look so surprised. I'm good with my hands." He wiggled his fingers.

"Is that why you work in the body shop?"

"Nah. Apart from doing it to help Max, I do that because I love engines. Taking it all apart, seeing how it works, and then putting it all back together." He closed his eyes. "The sound they make is pretty awesome, too."

The first time he'd blasted Kala to New Jersey one hot summer afternoon, her engine had been so loud his bones had vibrated.

Carter opened his eyes to see her gazing back at him, innocent and wanting. She was such a f*cking paradox. The stirring in the depths of his stomach twisted sharply until it began to bloom into something more, something bigger.

It was more than yearning. It was craving. No, he was ravenous for more of her—in every way she'd allow him to have her.

He sucked in a breath against the crushing need to kiss her.

He cleared his throat, the need to place his mouth against hers rising like a tidal wave through his body. "Nothin'."

Well, this sh*t was new.

He didn't kiss women — ordinarily, they kissed him. Usually, they begged. He'd wanted to do unspeakable things to Peaches since he'd first seen her, but kiss her? That had never crossed his mind.

"You smell good," he whispered. "Do you know that?"

Kat swallowed. Her hand stilled on his chest.

"You do," he said, dropping his shoulders farther, bringing his face closer to hers. "You smell really f*cking good."

"Thank you," she replied, shifting her back against the bark of the tree.

Her body was burning up, even with the breeze around them. He was so close. She knew she should push him away, but every time the thought entered her mind, she wanted to do the complete opposite. She wanted him closer.

"What are you thinking?" Carter's hands slid down the tree until they were resting above her shoulders.

The blue of his irises reminded Kat of the Caribbean Sea, and the pucker of his top lip ached to be licked. She noticed a small scar on his chin, and her fingertips itched to touch it.

"I'm — I'm thinking that we need to, we need to get — I need to go home," she stuttered and his nose grazed her left temple.

"Do you want to go home, Peaches?"

Carter moved his head back, his eyes hooded and sexy. "Can I tell you something?"

Kat could do nothing but nod. Carter's stare prowled down her face, coming to a dead stop at her mouth.

"I know I shouldn't, and I don't usually kiss, but, f*ck, I want to." He trailed his thumb across her mouth. "I want to find out what your top lip tastes like." He licked his own. "And then compare it to the bottom." He exhaled. "I'm desperate to know if your tongue tastes of peaches."

Kat's eyes fluttered closed at his words. "We — I . . . please," she murmured. "Don't." The word fell from her but it made her stomach clench all the same. She was amazed she had the energy to utter the one syllable at all.

"Would it be so bad?" He moved, his breath washing over Kat's face like a lusty fog. "God, you're so pretty."

Everything in Kat's body was surging toward the man in front of her. Her core purred, her pupils dilated, and her heart beat wildly. She knew they were about to cross a line — a huge dangerous line that had her career written all over it.

"Carter," she whispered again, in one final attempt to stop what she knew in her heart was inevitable. "We can't do this."

"I know," he answered, cupping the side of her face. He tilted his head, his mouth a luscious whisper across the edge of hers. "Just one taste. Just one. That's all I want."

And then his lips pressed against hers.

Get A Pound of Flesh here, and check out more great content on XOXO After Dark:

Books
Make Room in Your TBR Pile, Because These 25 Books Coming Out in June Deserve a Spot
by Sabienna Bowman 3 days ago