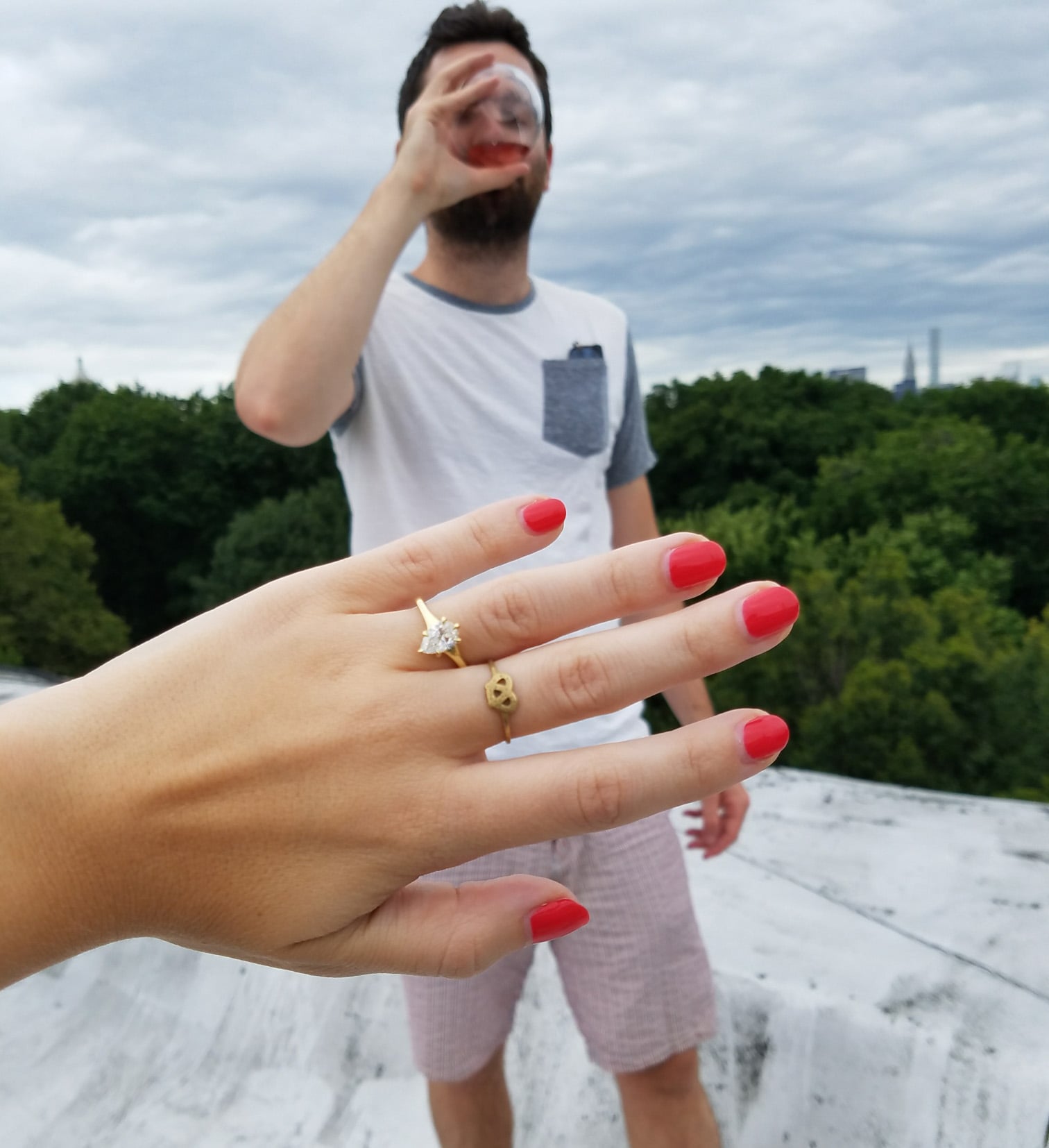 Before my engagement ring was even a pear-shaped twinkle in my eye (fine, an absurd amount of years before I even had a boyfriend), I'd already mapped out a very specific vision of what my wedding day would absolutely not look like. There would be no gigantic white dress (maybe a nice off-white pantsuit, á la Hillary Clinton), I would never promise to "obey someone" in my vows (ugh), and my dad would definitely not hand me off relay race-style at the end of the aisle. I truly wanted no part in the sorts of patronizing traditions and unattainable standards of bridal perfection that seemed to take perfectly sane women and turn them into something like this:

More than anything, it was important to me that my wedding day not be treated like the pinnacle of my existence; there were other goals and dreams on my list that didn't involve locking down a husband, you know? I figured that the easiest way to make it clear that being a bride wasn't my lifelong dream was to keep it simple and straight up elope. If everything went to plan, I'd get married in a courthouse, preferably in a ceremony that lasted 10 minutes or less, with a guest list consisting only of the two witnesses necessary to make the marriage license legal.

But fast forward to last month when I actually did get engaged (to my favorite person who would have been completely happy with any kind of wedding, I might add), and suddenly eloping didn't seem like such an obvious choice anymore. Congratulatory calls rolled in from friends and family, with one after the other asking the same excited questions about what our wedding plans might be, or if there'd be a "real" wedding at all. (Probably a sign that I had publicly aired my opinions of traditional weddings a few too many times, my bad.) And despite my former rock-solid stance against it, I had to admit that it was really hard not to be just as excited as everyone else was at the prospect of a celebration. Did I really want to elope?

Related:
Who Says You Need a Big Dress For the Big Day?

Looking for some reassurance, I rang up my family's resident experts on bucking wedding traditions: my parents. They eloped without telling a soul back in the 80s (which I always thought was pretty cool and maybe a tad inconsiderate), and I'd always assumed they'd done it because of my mom's distaste for all things sexist and traditional. After more than 30 years of marriage, it seemed to have panned out well enough for them.

Could I really pretend that marriage wasn't worth celebrating at all because I hated the gender stereotypes that might be attached?

Fully expecting my mom to espouse the many benefits of her own elopement and to remind me that traditional weddings with white dresses were festivals for the patriarchy, I asked for her thoughts on my conundrum. But she didn't say any of what I had anticipated. Instead, she admitted having regrets about doing something so major without including anyone or really celebrating it. She said that it was a decision made from a place of feeling totally overwhelmed, and that if they could do it over again, they wouldn't do it the same way twice.

That thought rattled around in my head for a while after we hung up: wouldn't do it the same way twice. I'd been lucky enough to find my partner and intended on doing this marriage thing only once — no repeats, no do-overs, no takebacks. If we skipped out on marking the occasion, that was it. Could I really pretend that getting married wasn't worth celebrating at all because I hated the gender stereotypes that might be attached?

Long story short, the answer for us was "no." I still don't want to wear a giant white dress or to promise to obey someone in my vows or to be handed off relay race-style at the end of the aisle by my dad. I am still the same person I've always been, with the same values and penchant for getting into heated debates about gender stereotyping with the nearest available human with ears.

But I've decided that I don't have to make a choice between continuing to be the same person I've always been and having a wedding. Even though some people might disagree with the traditions we're planning on leaving out from our ceremony, who cares? There is no official rule book that says my partner and I have to participate in traditions we're uncomfortable with. And when all is said and done, some milestones are just too important to pass up on celebrating with the people you love — for us at least, marriage is one of them.

Relationships
I Lived With My Ex After We Broke Up, and It's One of My Biggest Regrets
by Lexi Inks 1 hour ago