In this all-new installment in the bestselling Highland Guard series from author Monica McCarty, Eoin MacLean decides to fight with Robert the Bruce, knowing he will earn the enmity of his new bride's father; but he doesn't expect Margaret MacDowell, the spirited girl he's fallen in love with, to betray him.

Blaming her—and himself for trusting her—for the disaster that led to the death of Bruce's two brothers, Eoin cuts her out of his heart and leaves her behind with no intention of ever coming back. But when Bruce puts him in charge of conquering the troublesome southwest province of Galloway—ruled by his wife's father—Eoin reconsiders.

Especially after he learns that his treacherous wife who thinks him dead plans to remarry. That's one wedding he has no intention of missing. 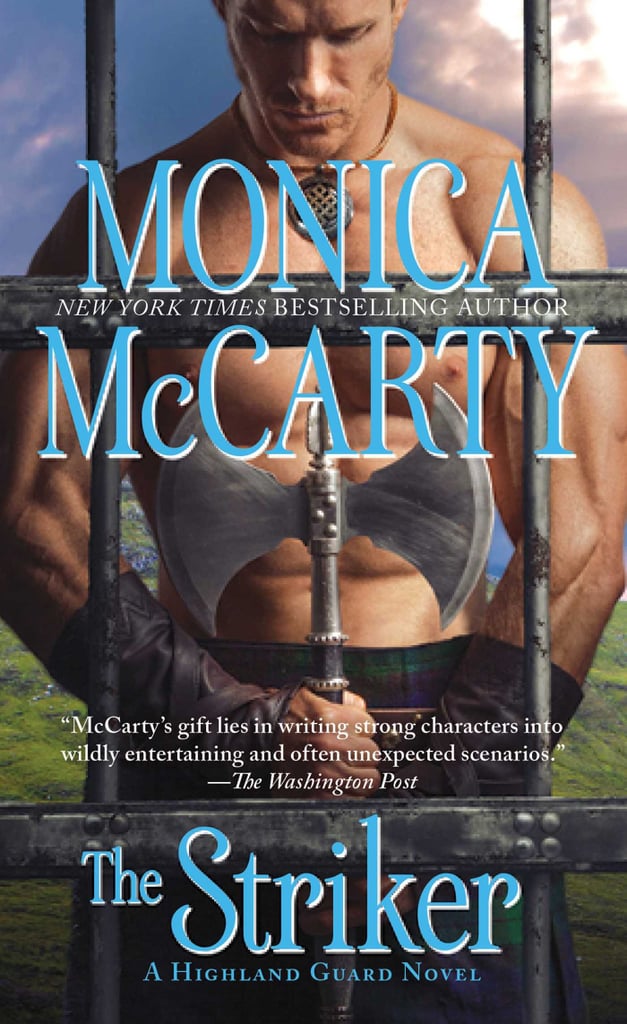 His hand plunged through her hair to cup the back of her head and his kiss turned punishing, ravishing, desperate. She understood because she felt it, too. She was kissing him back with passion that seemed to spring from nowhere, borne more from instinct than from experience. In the five or six times that she'd allowed Tristan to kiss her, she'd never felt a fraction of this kind of fervor. She'd never felt anything like this at all.

All that she knew was that she wanted him—more than she'd ever wanted anything in her life. Her fingers gripped the hard ridges of muscle on his shoulders as if she would never let go. He was even taller and bigger than she realized up close like this, making her feel oddly vulnerable.

She wanted to kiss him, to feel his tongue in her mouth, his hands on her body, and his big, battle-hard body wrapped around her. She wanted to inhale the delicious masculine scent of pine and soap. She wanted to feel her breasts crushed against his chest and her hips pressed against his. She didn't know how much she wanted that until she felt the thick club of him against her stomach. Good lord! And then she couldn't seem to think of much else.

Desire crashed over her in a drenching wave, dragging her under. She felt so heavy. Especially her breasts and the intimate place between her legs. She moaned at each new sensation as he kissed her deeper and harder, silently urging him to give her more.

He answered with a groan and more pressure. Their bodies seemed to be melded together. She could feel the hard flex of his arm muscles as he drew her in tighter and tighter. Their tongues circled and sparred, waging a desperate battle of desire and urgency. Yet she never felt threatened. Even in the midst of this fierce onslaught of passion, there was an underlying emotion she didn't recognize but trusted. It felt almost like tenderness, which seemed silly given the frenzy of the kiss. But it was there, squeezing her chest and hovering over her like a warm sentinel, silent and protecting.

His jaw scratched the tender skin of her chin, but she didn't care. Closer . . . Harder . . . She wanted to be consumed. She wanted to melt into him. To become one.

His hand was no longer in her hair. It was on her bottom, lifting her . . .

The floor dropped out of her stomach. A rush of liquid warmth flooded between her legs. She could feel him, the hard column of his manhood fitted intimately against her. It felt . . . big. Powerful. And really, really good.

Especially when he started to move his hips in insistent little circles. Her stomach dropped again, and the place between her legs grew even warmer and more needy. Her body trembled. She ached to press back. And she would have, had the sound of the door opening not torn them apart.

Everything was so new and incredible. The way his mouth ravished her neck, his fingers plied her nipples, and even the feeling of his big, hard body stretched out against her. All the little details fascinated her. The warmth of his skin, how tanned it still was from the summer sun, the small V of golden hairs on his chest and the even more enticing trail that led from his stomach to his manhood.

She'd wanted to touch him. Especially after seeing the way he'd held himself in his hand, when he'd been watching her. It had made her curious. And aroused. Just looking at him made her aroused. He was wrong earlier: he was beautiful. Tall and broad-shouldered, his body was tightly packed with slab after slab of lean muscle so sharply delineated it could have been carved from stone. There was not a spare ounce of flesh on him. Good lord, his stomach was lined with so many bands the washwoman could have beat clothes against it!

When he leaned over to kiss her, she couldn't resist sliding her palm over some of those ropey bands before coming to rest on the big rock of muscle at the top of his arm. She loved the feeling of him leaning over her.

The solidness. The weight. The connection.

His kissed her mouth, her throat, and—finally!—her breasts. The warm, wet heat of his mouth closing over her and sucking made her cry out. She arched against him shamelessly, begging for more as he sucked harder, as his tongue circled her nipple and tugged it gently between his teeth.

A strange feeling was coming over her. Building. Intensifying. Her skin felt hot, her limbs weak, the place between her legs soft and achy.

She didn't know what she wanted until he touched her. Until his fingers found that warm place and started to caress it. Softly at first, with gentle little circles that made her body weep with pleasure.

But soon it wasn't enough. She started to shake. Her hips started to lift against his hand, pressing . . . begging for more.

He growled—maybe muttered some kind of curse— against her breast and sucked harder. Sucked until a needle of pleasure connected his mouth at her breast and his hand between her legs. Then finally, his finger slipped inside her and gave her what she hadn't known she wanted. Stroking. Plunging. Faster and faster. Harder and harder. The heel of his palm pressed against her, giving her the pressure she'd unconsciously craved. It felt so good . . .

She was writhing, moaning, lost in sensations she didn't understand. Her body seemed to be struggling, fighting against something.

Vaguely she was aware of the coolness of the air against her damp breast as he lifted his head to look her in the eyes. She would never forget the way he looked, his face a tight mask of restraint, his gaze as fierce and intense as she'd ever seen it.

"It's all right, sweetheart. Just let it go. I'll catch you."

Whether it was simply the sound of his voice, the look in his eyes, or that her body simply couldn't fight it anymore, his words snapped the last threads of resistance. She gave herself over to the sensations and felt her body lift and soar.

Get The Striker, and check out more great content on XOXO After Dark: