The Study of Seduction is the second installment of the Sinful Suitors series. The story follows the curmudgeonly Edwin Barlow, Earl of Blakeborough, who finally meets his equal with fearless flirt Lady Clarissa. This marriage-of-convenience story ignites into a passionate love affair that neither Edwin nor Clarissa could ever have predicted. But when Clarissa's stalker reappears and vows to expose the lovers' deepest secrets and threatens to destroy their blossoming attraction, they'll have to find out if their tenuous bond will withstand public ruin or if Edwin will lose all that's important to him in order to protect his bride. 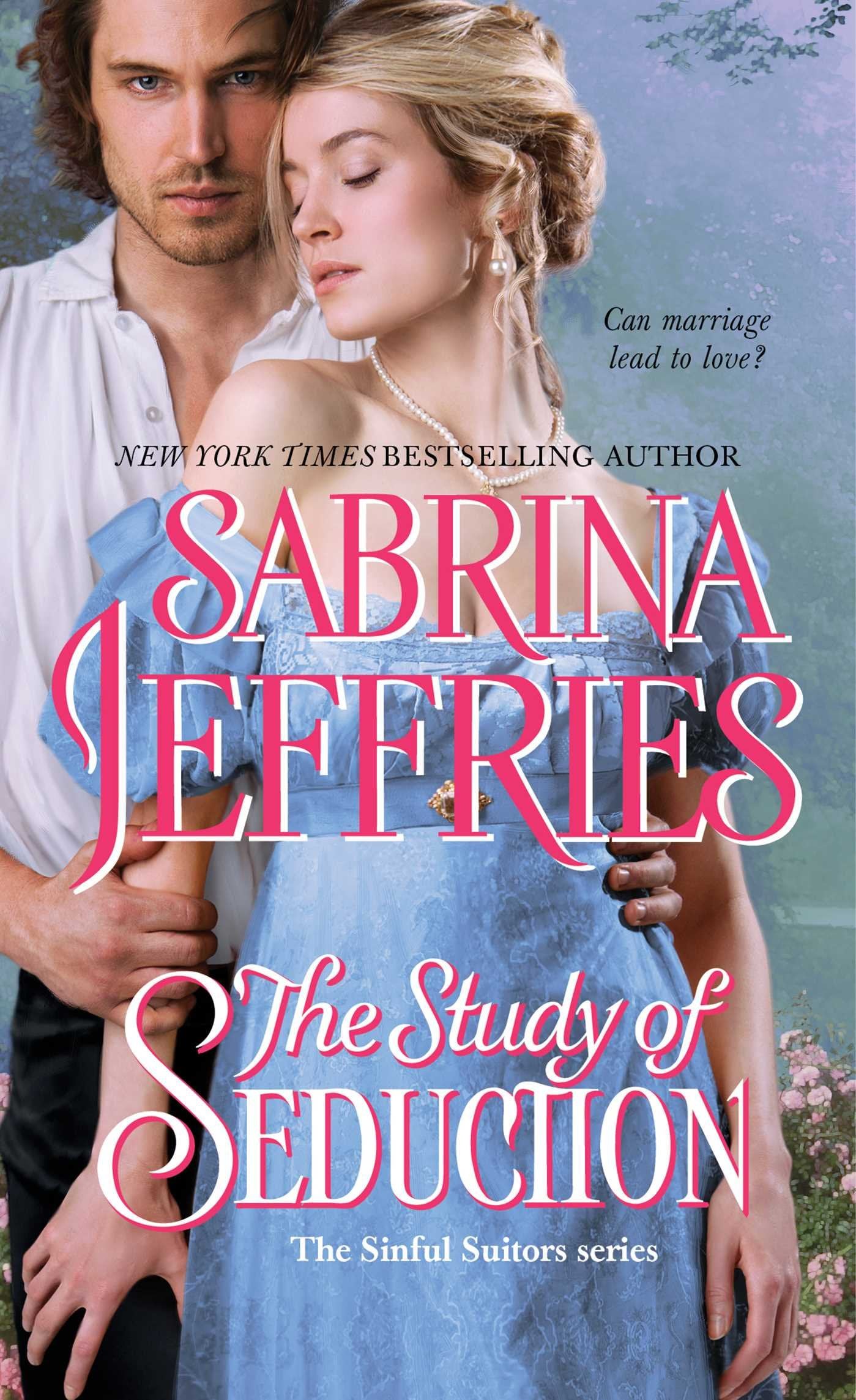 The moment they entered the library, Clarissa's stomach knotted up. It was odd, really, that she should be so edgy around Edwin. Though it had taken her a long while after her disastrous debut to stop panicking every time a man touched her, since then she'd shared a few kisses with the occasional suitor, partly just to prove to herself that she could endure them.

But none of the kisses had been more than exercises. None of the men had been anyone she cared about. This was Edwin. He was different. So it was probably a good thing he only meant to kiss her arm.

Summoning an expression of quiet calm, she turned and threw Edwin's own words back at him. "Let's get this over with, shall we?"

Edwin cast her an enigmatic look. "What, exactly?"

To her mortification, he chuckled. "I do, but it is much more fun watching you beat around the bush."

With a roll of her eyes, she thrust her arm out. "You, sir, can be quite a tease. I wouldn't have thought it."

"You don't know me as well as you think." Turning her hand over so the pearl buttons of her cuffs were at his disposal, he began to unfasten them with slow, intent interest.

Very slow. Very intent. It was different from anything she'd experienced. There were only three buttons, yet he took his time, until she was ready to scream at him to be done. Because the attention he gave to unveiling her wrist, inch by inch, was doing funny things to her insides. Unfamiliar things.

When he finished her buttons, he paused, his hand lightly encircling her wrist. As if he could detect the wild thrum of her blood through her veins, he murmured, "For a woman who claims not to be affectionate or romantic, you're oddly nervous." He met her gaze. "I won't bite, you know."

"Of course not," she snapped.

His eyes narrowed, shining like sleet on slate in the candlelit room. "No need to get testy. You agreed to this, remember?"

She forced herself to breathe, to smile. "Of course."

But she hadn't expected it to be such an overwhelming feast of sensation. As he bent over her arm, the scent of his hair—tinged with musk and cloves—wafted to her, faint but distinctly Edwin. He pushed her sleeve up, baring the tender skin inside the bend of her elbow, and the merest brush of his thumb sent her blood racing.

Then his lips were on her arm. Her naked arm. She could feel the rough scrape of his whiskers, hear the clock ticking seconds that seemed to slow as his mouth pressed into the pulse beating frantically just there.

The kiss was more intimate than she could possibly have imagined. Her knees went weak, especially when he lingered to draw in a long breath as if to inhale her fragrance.

Still holding her wrist, he lifted his head to stare at her with fathomless eyes. She couldn't look away.
So, to break the spell, she asked, "Why kiss me there?"

"Call it one of those whims you seem to think I have." He straightened, then tugged her closer. "And here's another."
Then he kissed her lips.

Clarissa stared at their reflections in the mirror—her hand clasping Edwin's wrist while he stood pressed up against her back, his hand covering her breast through her gown. The way he waited patiently for her permission before he would continue reassured her that if she so much as tugged on his hand, he would stop. But if she did that, she might never have another chance to explore these things with him.

Did she want to explore these things with him?

She released his wrist.

For half a second she feared she might regret it, because something dark and daring glittered in his eyes. But before she could react to that, he turned her head to the side with his free hand so he could kiss her mouth over her shoulder.

Then he was devouring her lips, and his hand was fondling her and it felt so astonishing that she soon found herself pressing her breast willingly into his palm. With a low groan, he kneaded it so deftly that it made her feel urges she'd denied herself for years. They were sweet and hot and rousing and all the things she'd never thought to feel again.

She turned into his arms and his hand fell away from her, but only so he could hoist her onto the dressing table. "Edwin!"

"Yes, minx?" He began kissing his way down into the valley between her breasts. "I want to taste you. Will you let me?"

"A-all right." Her blood howled through her veins, wanting things, needing things. She was living dangerously now, but she had to know, had to see if Edwin would push and prod his way past her walls.

Half of her wanted him to. The other half was terrified he would.

Yet she buried her hands in his hair as he maneuvered one breast free of its trappings and covered it with his mouth.
The Vile Seducer hadn't done such a thing—just mauled her through her bodice. But Edwin . . . oh, heavens. His silky, warm mouth explored her, sucking and soothing until she dug her fingers into his scalp. "Ohh . . . that is so . . . so . . ." She let out a shuddering sigh.

He uttered a choked laugh against her breast. "As if you need to ask." He licked her nipple. "Can't you see how I forget myself when I'm with you?"

His hair spilled over her hands like black satin as she clutched his head to her bosom. "But why?" she breathed. "You're always . . . chiding me."

"That's to keep everyone from realizing that I want you in my bed." He stared up at her, eyes gleaming. "I feared the whole damned world could tell."

"That isn't why you chide me," she said wryly. "You disapprove of me, admit it."

"You do make me insane." He teased her breast lightly with his teeth, making her arch up against him. "And if we were to marry—"

"Would you?" He straightened, dragging his open mouth up her neck in a series of hot kisses. "You're not shooting me now."

"So I'll marry you." His hands caressed her other breast through her clothes. "Then you'll have no regrets."
"Edwin . . ."

He took her mouth again, to silence her.

Get The Study of Seduction, and check out more great content on XOXO After Dark: