Getting married was never important to me, but I did it once anyway. After two years of marriage, I got divorced, and while I knew I wanted to find love again, I had no interest in getting married again. Thankfully, I found a partner who felt the same way, and after five years together, we decided to get — for lack of a better word — nonmarried. More specifically, we designed a legal contract, called a cohabitation agreement, that defines our relationship the way we want it to be. 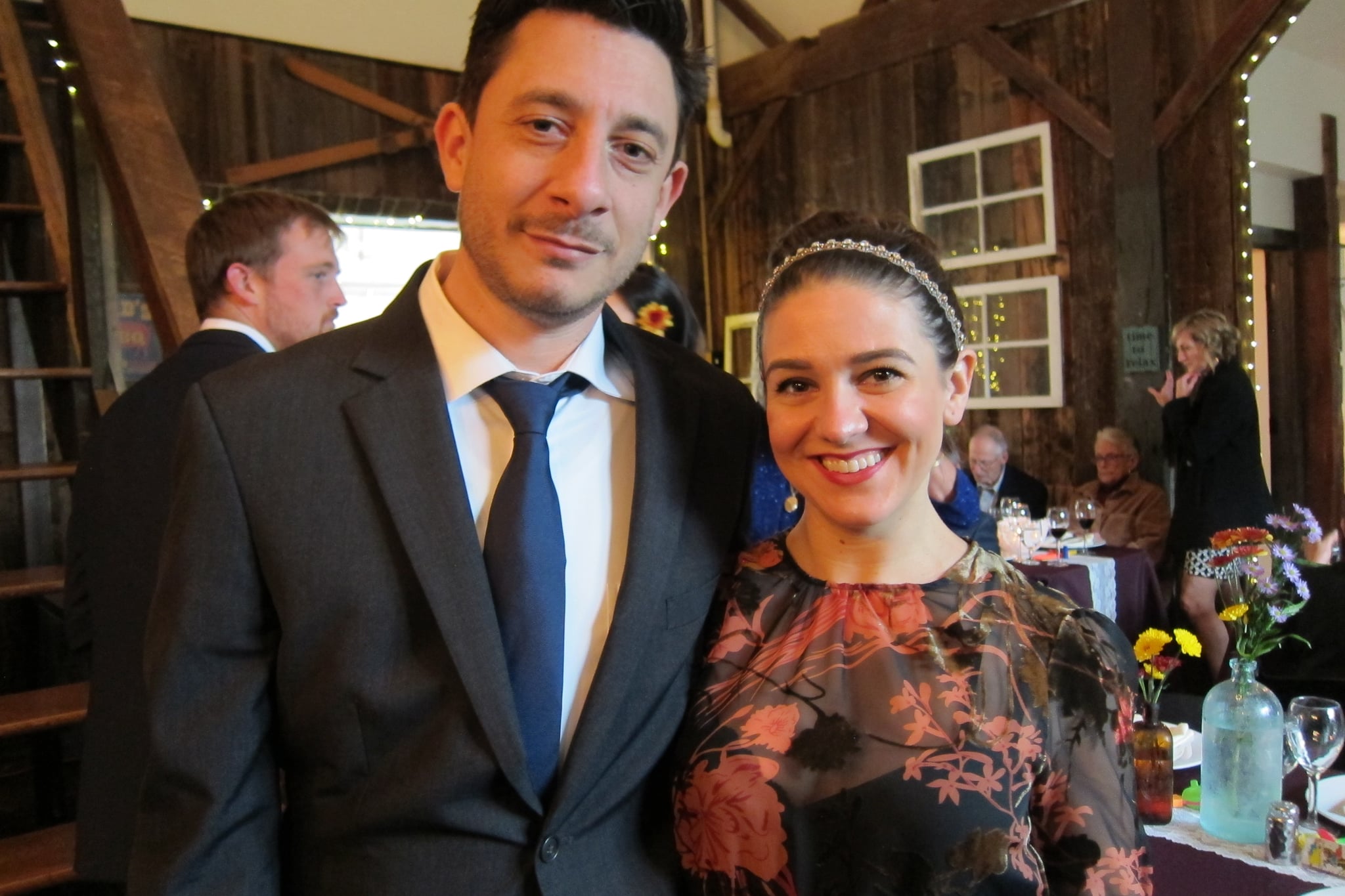 The author and her partner at someone else's wedding.

I don't have anything against marriage as an institution or against people who want to get married, but for me personally, I don't see the point. A commitment is more important to me than the ritual. What appeals to me is waking up each day and making a choice to be with my partner. It feels more important and more romantic. In fact, I feel more committed and secure in my unmarried relationship than I did when I was married. (Given, I'm older now, and I have a better idea of what I want from life.)

A commitment is more important to me than the ritual. What appeals to me is waking up each day and making a choice to be with my partner.

However, we live in a country that still very much values marriage as an institution, and choosing not to marry can complicate things. Being in a committed relationship means merging very important parts of your lives. My partner and I live together in a condo that I own, we coparent a dog, and we share household finances and responsibilities. However, despite my romantic side, I'm also a realist, and I know that without any type of legal document, sh*t could get messy if we ever split up. Married couples often have prenups to address what would happen if they split up; cohabitation agreements are often called "no-nups," since they serve a similar purpose.

What's the Difference Between Marriage and a Cohabitation Agreement?

As with any legal transaction, hiring a lawyer is an essential step. I was lucky enough to find Diana Adams of Diana Adams Law & Mediation, which specializes in "providing support for positive beginnings and endings of all types of family relationships." Adams's firm often works with clients in the LGBTQ+ communities, people in polyamorous relationships, and other nontraditional romantic and familial arrangements. Rather than attempt to explain the difference between marriage and a cohabitation agreement, I'll just let my lawyer do it.

"Marriage is a one-size-fits-all arrangement," Adams says. "Cohabitation agreements are à la carte. Marriage comes with over a thousand different rights and responsibilities, to be each other's financial safety net and share each other's debts and assets as a social welfare state of two." Along with marriage, Adams says, come "immigration rights, inheritance rights, and hundreds of others about which you've never heard and may or may not want, like the right to be buried next to each other or to not testify against each other in court. Some of these rights can be tweaked in prenuptial or postnuptial agreements; some can't."

Adams's goal is to support couples who choose not to get married, whatever their reasons; sometimes it's because couples disagree with the institution politically or because they are nonmonogamous. A cohabitation agreement allows those couples to design their own legal unions and literally write their own rules.

Domestic partnership is another option for couples who don't want to get married; in New York City (as in many places), domestic partnership involves filling out forms at City Hall, but these relationships are defined differently in each city and state — usually, it means you can share health insurance. However, Adams points out, "This doesn't involve the essential conversations of negotiating and discussing what you want to create together in your relationship, whether you'll share finances and how, which happens instead with a cohabitation agreement."

What Is a Cohabitation Agreement?

A cohabitation agreement is a legal document that outlines how a couple will split expenses, as well as how they will maintain financial independence. The contract clarifies whether one partner will support the other financially if they break up and other financial considerations, such as whether contributing to mortgage payments gives a partner any ownership of a property. You can also use a cohabitation agreement to define other important concerns in a relationship, such as how you define monogamy or infidelity and who gets custody of pets in the case of a breakup.

"Money and sex are two of the largest causes of conflict in relationships because partners have different expectations and hidden assumptions," Adams says. "I facilitate conversations about both topics to help couples get on the same page about what they want to create together in terms of financial interdependence as well as about (non)monogamy. You have the right to design your own relationship, and your relationship will be stronger if you do."

"You have the right to design your own relationship, and your relationship will be stronger if you do."

It's true: the process of designing our cohabitation agreement and having those conversations around it made my relationship stronger with my partner. When I got married nearly 10 years ago, I didn't think about the rights and laws that went along with the marriage certificate, and one reason my marriage ended was because we weren't open enough with each other about what we wanted. Drawing up a cohabitation agreement, on the other hand, forced my partner and me to talk about all the hard topics — death, sex, money, and the possibility that this might not last forever. Rather than being unpleasant, these conversations allowed us to talk about our future in a way that felt open and intimate.

What to Consider When Creating a Cohabitation Agreement

Obviously, the point of a cohabitation agreement is that you design it to fit your needs, so while I can't tell you what to put in yours, I can tell you what we addressed in ours.

Drawing up a cohabitation agreement forced my partner and me to talk about all the hard topics — death, sex, money, and the possibility that this might not last forever.

The biggest consideration in our cohabitation agreement was how we would share finances, and our biggest goal was to make sure that we would both be taken care of financially if we split up. When my partner and I got together, I was 35 and he was 36. We were both financially independent and living alone, and both of us had been saving for retirement for over a decade. It made sense to us to keep all of our finances completely separate, aside from shared household expenses.

We also had an income disparity to consider. My partner is a public school teacher, and I make more money than he does. We've always had an unofficial method for sharing expenses, with each of us contributing different amounts based on our income. With the cohabitation agreement, we made that official. In cases where couples have an income disparity, Adams advises clients to ensure that neither party is living beyond their means, which was another factor we considered. Before I decided to purchase a condo, my partner had been living in the same apartment for nearly 20 years, and the rent was incredibly low. Moving into my condo meant that he would give up that apartment, so while he contributes to the condo payments, I contribute more. That way, if we ever break up, he can get back on his feet more easily, because he hasn't spent years living beyond his means.

We also have a dog we both love very much, so we added a section about pets and who gets custody if we split up. We also added a stipulation about couples counseling: if either of us is ever considering ending the relationship, we agreed to at least three months of couples counseling to try to reconcile.

While we didn't choose to draw up wills since we do not have any children, we did specify who would get our individual money if one of us dies in the course of the relationship. We've also listed beneficiaries on our personal retirement and savings accounts, which works in lieu of a will.

My partner hired a lawyer to review the cohabitation agreement, ensuring that his best interests were represented and ensuring the contract is even stronger. We can also choose to revise our agreement over the years should our needs or desires change.

Why Unmarried Couples Should Also Consider Naming a Healthcare Proxy

Related:
Having an Open Marriage Ultimately Led to My Divorce

A healthcare proxy is a "worst case scenario" document, but a very important one. Imagine that I got into a car accident and I was incapacitated and unable to make decisions for myself. In that case, my partner could make crucial decisions for me, like whether or not to perform a surgery. Signing those healthcare proxies led to another set of heavy but important conversations between us, such as what each of our wishes would be if our brains were permanently affected by an illness or injury.

The Importance of Difficult Conversations

Signing a cohabitation agreement or healthcare proxy form requires very intimate and sometimes intimidating conversations, but it was entirely worth it for us as a couple. Practically, we've made all of the "unofficial" rules of our relationship official. Emotionally, it prompted us to think about our future together and what we want and need out of our relationship and out of life. We even celebrated the signing of our cohabitation agreement with a bottle of Champagne.

No one who's in a happy relationship wants to consider that it could end someday — and people get especially uncomfortable with the idea that the end could get very ugly. But the reality is, many once-happy marriages end in acrimonious breakups that require lawyers and court dates and lots and lots of money. I imagine that most everyone reading this article knows someone who has gone through an ugly divorce. So why not have a few challenging conversations ahead of time, just in case? My partner and I care deeply about each other's well-being, and drawing up a cohabitation agreement now means we're taking care of each other later.